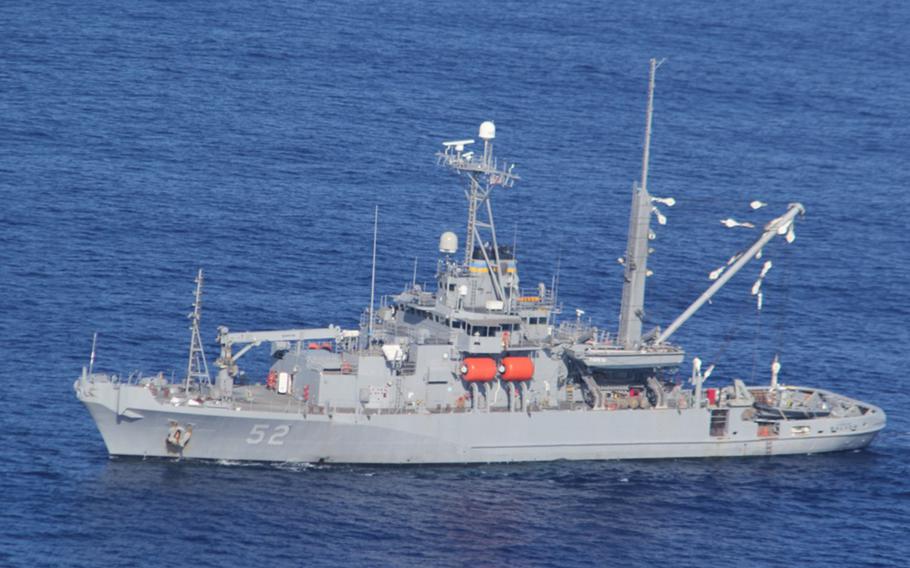 The diving and salvage ship USNS Salvor, shown here in 2016, is part of the Sama Sama exercise. (U.S. Navy)

The U.S. and Philippine navies are training in the South China Sea and on shore in the Philippines this week, according to a Navy statement.

China, the Philippines and several other Southeast Asian nations dispute territory in the area where China has built military facilities on reclaimed land and clashed with the U.S. periodically over naval operations in international waters.

During Sama Sama, American and Filipino sailors are carrying out air-defense, diving and search and rescue drills, the Navy said in its statement.

The Japan Maritime Self-Defense Force is watching the training, which began Monday.

Meanwhile, sailors and Marines are attending speeches and classes in San Fernando, San Antonio, Manila and Subic Bay on topics ranging from medical issues to, “public affairs, engineering, explosive ordnance disposal and anti-submarine and surface operations,” according to the Navy.

Rear Adm. Joey Tynch, commander of Task Force 73, said in the statement that the U.S. and Philippines’ “shared interest in maritime security is what Maritime Training Activity Sama Sama is all about — our shared belief that regional challenges increasingly require cooperative solutions by capable naval forces.”

Last summer the allies patrolled in the Sulu Sea watching for piracy and “illegal transnational activity” and exchanging “best practices in visit, board, search and seizure techniques,” according to the statement.

The Navy has made several port calls in the Philippines this year, including three aircraft carrier visits. Ahead of the USS Ronald Reagan five-day port call last month Rear Adm. Marc Dalton, commander of Task Force 70, called the islands “one of the favorite port visits to sailors in the Pacific.”

Capt. Lex Walker, commodore of Destroyer Squadron 7, said in the Navy statement that he looks forward to future iterations of Sama Sama.

“As the [Marine Training Activity] continues to evolve in scope and scale, the U.S. and Philippine Navies will continue sailing together towards the common goals of increased maritime security and stability,” he said.