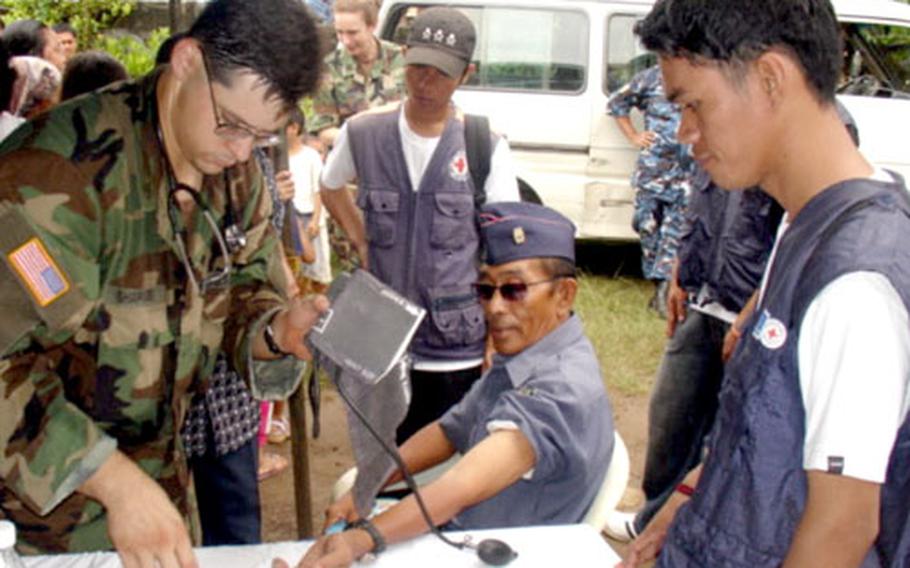 A U.S. medic from the Joint Special Operations Task Force in Zamboanga takes the blood pressure of a Philippine police officer Monday during the Medical Civic Action Program conducted by Philippine and U.S. military personnel in Jolo. (Courtesy of Department of Defense)

U.S. and Philippine military medical personnel visited Jolo City on the southern Philippine island of Sulu last week to hold a medical civic action program, or MEDCAP &#8212; a free medical and dental clinic for local residents, according to the command that helped sponsor the event.

Military and civilian medical personnel provided consultations, medicine, dental treatment and minor surgery to more than 1,100 residents, according to a statement from the Joint Special Operations Task Force, which is based in the Philippines.

The MEDCAP is part of Project Bayanihan, a U.S.-Philippine partnership program to aid development as a means to counter Filipinos&#8217; support for terrorist cells believed active on the southern islands.

In 2003, the annual exercise Balikatan was scheduled to take place on Sulu but was relocated after widespread protests.

In 2002, 1,300 U.S. troops acting as advisers helped the Armed Forces of the Philippines track and kill or disperse members of the terrorist group Abu Sayyaf on Basilan, part of the same chain of islands. Reports at the time speculated that some members moved to Sulu.

Balikatan since has evolved from a large-scale operation like that on Basilan to a series of smaller training exercises each year.

The United States continues to share intelligence with the AFP and has provided millions of dollars in counterterrorism training and equipment, according to the U.S. Embassy in Manila.

Last week&#8217;s MEDCAP was the first bilateral military-led exercise or operation in Sulu. The U.S. Agency for International Development also began development programs in Sulu this year, the embassy reported.

During the MEDCAP, residents lined up for hours to see visiting medical staff, including Dr. Farrah Tan, Jolo&#8217;s provincial health officer, and her staff.