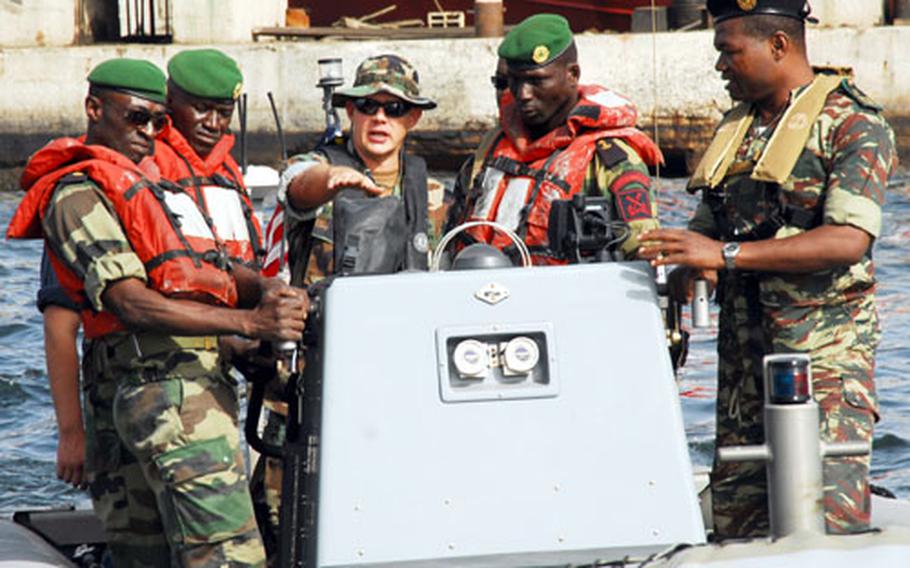 The sailors of the USS Fort McHenry are hosting luncheons and showing off the talents of the Navy&#8217;s 6th Fleet Band as they sail the Gulf of Guinea pushing the Navy&#8217;s newest approach to maritime security.

The underlying mission of the Navy&#8217;s novel Africa Partnership Station is to teach West African navies to secure their own coastlines and waterways to counter drug smuggling and illegal human trafficking and to cut down on illegal fishing &#8212; a $1 billion industry in the region, said Navy Capt. John Nowell, head of the mission.

&#8220;The hallmarks of APS are working with African partners, increasing capabilities and capacity for maritime safety and security, and building relations and partnerships,&#8221; Nowell said during a satellite-linked telephone interview as the ship sailed toward its next port in Ghana.

He downplayed fears that the recent creation of the U.S. Africa Command translates to the military&#8217;s intention to ratchet up military presence on the continent, a strategically important region that supplies about one-fifth of U.S. oil imports.

&#8220;They understand what we&#8217;re trying to do is build better coordination and help them in solving their own problems, and not increasing our footprint in Africa,&#8221; Nowell said of the sentiments voiced by African leaders with whom he met while the ship visited Dakar, Senegal, last week.

The Fort McHenry and High Speed Vessel Swift have just begun their roughly seven-month deployment to the Gulf. But, too, it&#8217;s a mission with an international flavor. While the ship trained in Senegal, for example, Spanish marines taught Senegalese sailors about small boat navigation and maintenance, and others provided them with medical and martial-arts training.

The Navy, too, has worked with nongovernmental and humanitarian organizations. For example, Seabees will refurbish a site in Tema, Ghana, near the capital of Accra, which later will be used as a civilian and military health clinic.