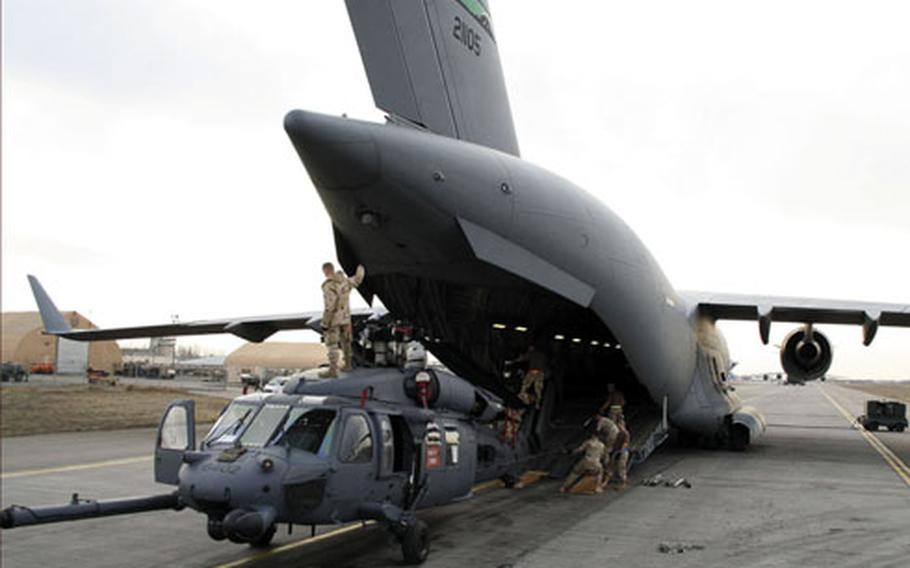 Air Force personnel work with maintainers to load a Black Hawk helicopter into a C-17 Globemaster III at Manas Air Base, Kyrgyzstan. (Courtesy of the Air Force)

Air Force personnel work with maintainers to load a Black Hawk helicopter into a C-17 Globemaster III at Manas Air Base, Kyrgyzstan. (Courtesy of the Air Force) 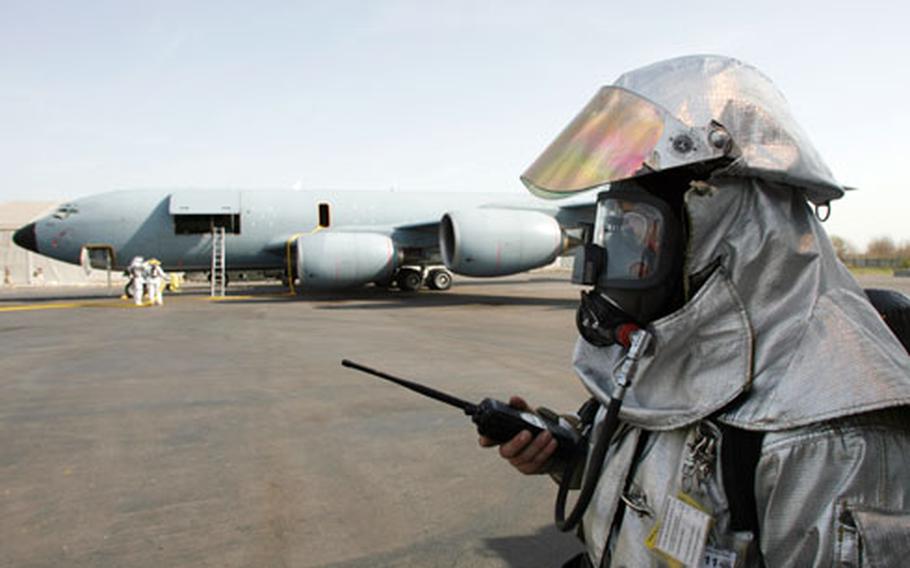 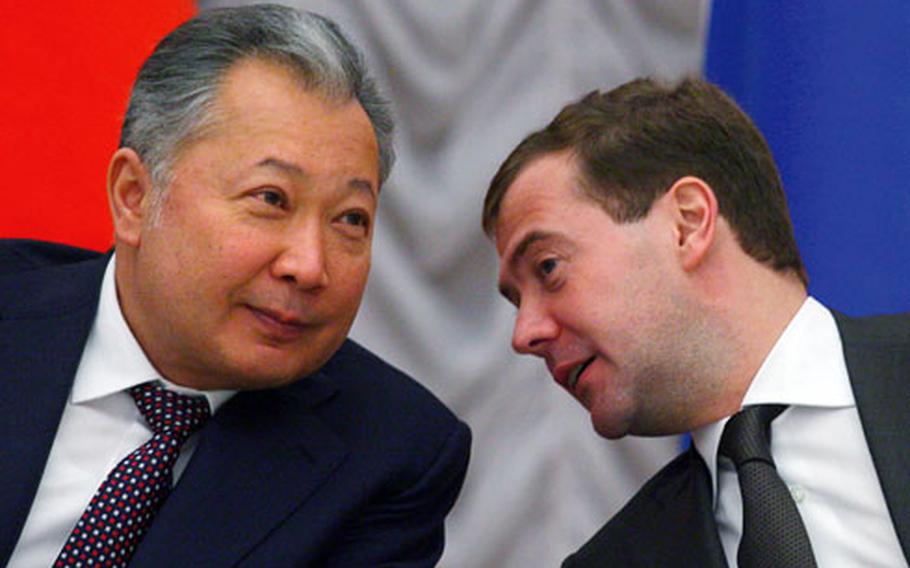 Russian President Dmitry Medvedev, right, speaks with Kyrgyz President Kurmanbek Bakiyev during a signing ceremony at the Kremlin in Moscow on Tuesday. Bakiyev said his country is ending U.S. use of the base. (AP photo)

As the Kyrgyz parliament on Wednesday considered a bill to close Manas Air Base, American officials remained optimistic they could reach a deal to keep open the crucial supply hub for the war in Afghanistan.

The turmoil surrounding the U.S. base in Central Asia is the latest challenge for operations in Afghanistan, where President Barack Obama has pledged to send up to 30,000 more troops this year. Supply routes from Pakistan have come under repeated attack, including an incident Tuesday in which militants heavily damaged a key bridge near the Khyber Pass.

On Tuesday, President Kurmanbek Bakiyev of Kyrgyzstan made his most forceful comments yet in the ongoing back-and-forth over the base. After meeting in Moscow with Russian President Dmitry Medvedev, Bakiyev said the base would be closed because it had served its purpose.

His announcement came shortly after Russia pledged $2 billion in aid and loans for Kyrgyzstan, a former Soviet republic. Bakiyev has threatened to close the base before, but each time negotiations have prolonged the lease.

By Wednesday, the U.S. Embassy in Bishkek put out a statement saying it had received no notification that the Kyrgyz would close the base. The statement said contract talks for the base were ongoing.

The base has been a source of both money and irritation for its Kyrgyz hosts.

Incidents including an aircraft collision and the 2006 shooting death of a Kyrgyz truck driver by a U.S. security forces airman at a base checkpoint have strained public support for the base.

But, according to U.S. Central Command boss Gen. David Petraeus, who visited Manas in January, the base was "key" to U.S. plans in Afghanistan. He said the U.S. pays $63 million in rent each year for the base.

Russia, which opened its own air base in Kyrgyzstan shortly after the Americans opened Manas, has long sought to pressure the Kyrgyz to close the base. Analysts say those efforts are part of a larger effort to counter U.S. influence in Central Asia.

According to the U.S. Air Force, some 1,000 military personnel from the U.S., Spain and France are assigned to Manas, along with 650 contractors. Coalition aircraft flying from the base include U.S. KC-135s, Spanish C-130s and French C135FRs.

Around 75 percent of U.S. military supplies bound for Afghanistan are sent through Pakistan. Creating and securing new supply lines has become a key priority in the buildup of troops.

Officials have not specified when the closure might take place, but the agreement under which the base was established in 2001 specifies the United States must be given 180 days notice.

"We have a standing contract, and they&#8217;re making millions off our presence there. There are no plans to shut down access to it anytime soon," Col. Greg Julian said, according to The Associated Press.

Manas is the only U.S. air base in Central Asia. In 2005, the Uzbek government expelled U.S. troops from a larger air base there after a dispute over human rights issues.

While Medvedev said the decision to shut down Manas was made by Kyrgyzstan alone, the Russian newspaper Kommersant said Russia "has laid down a strict condition: the provision of Russian financial help should lead to an official announcement by Kyrgyzstan on renouncing its obligations on the presence of the US air base."

"I have not heard anything officially from the Russian government, so I would not presume to &#8212; to assume that they are doing as is reported," he said.

"All I can tell you at this point is that we have an agreement with the Kyrgyzstan government for us &#8212; and have had it for some time &#8212; for us to operate out of the Manas Air Base there.

"It is a hugely important air base for us. It provides us with a launching-off point to provide supplies to our forces in Afghanistan. We very much appreciate the support the Kyrgyz have given us in the use of that base, and we hope to continue using it.

"We have an agreement, but we remain in talks with them actively on addressing whatever concerns they may have about our continued use."

Analysts following the saga have warned that the Manas situation could turn out like the failed negotiations with Turkey to open a northern front in the 2003 Iraq invasion. U.S. officials were convinced they could reach a deal with the Turkish government on allowing troops to transit through to Iraq&#8217;s northern border, but failed.

On Tuesday, Morrell acknowledged money was a key issue in the Manas negotiations.

"Whether or not we pay more money is certainly a subject of discussion," he said. "But that shouldn&#8217;t be a surprise. &#8230; I have seen nothing to suggest &#8212; other than press reports &#8212; that the Russians are attempting to undermine our use of that facility."