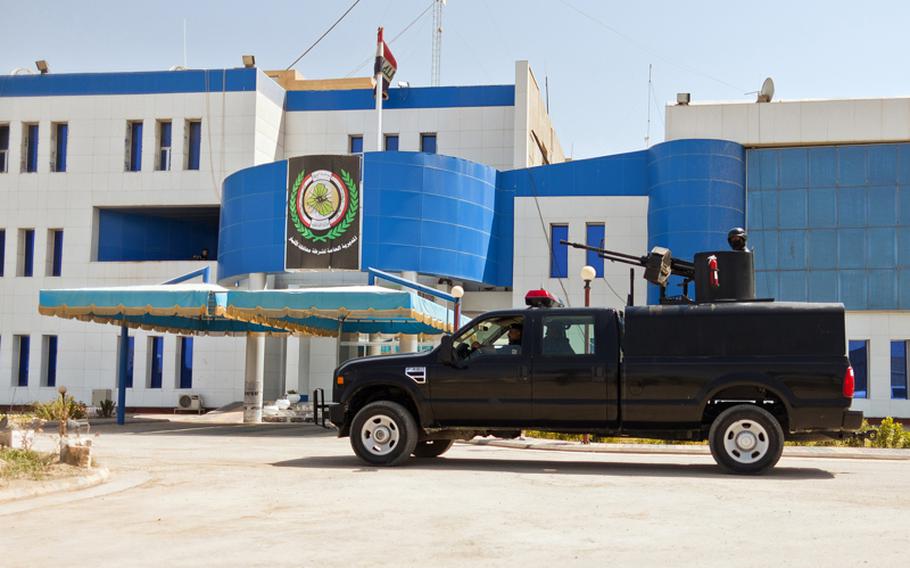 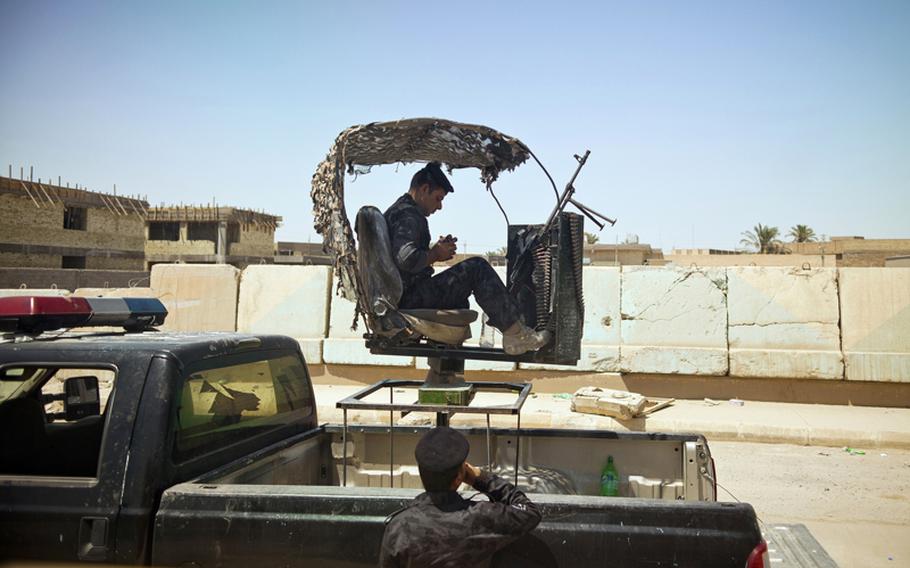 Buy Photo
Iraqi police guard the entrance to Police Headquarters on Aug. 13 in Ramadi, Iraq. (Nathan A. Bailey/Stars and Stripes) 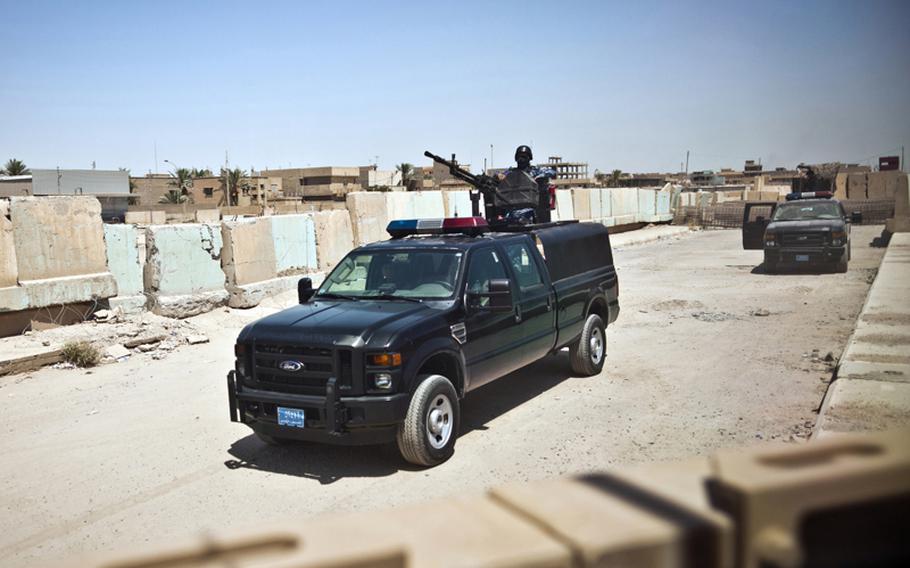 RAMADI, Iraq &mdash; There are 3,200 soldiers in the 82nd Airborne&rsquo;s 2nd Brigade Combat Team serving in Anbar province, but only a handful of those paratroops will ever fire a shot at an enemy this year.

They still seek out roadside bombs to clear, though they don&rsquo;t find very many. They remain on call for Iraqi security forces operating in a province that is still a base of operations for al-Qaida in Iraq, but the police rarely call for backup.

Although U.S. soldiers in Anbar still do intelligence-gathering and some Iraqi commando training, the brigade&rsquo;s mission is focused on advising security force managers on how to run their units more efficiently. Soldiers say the Iraqis are getting it &mdash; not to a U.S. Army standard, but to a level that they call &ldquo;Iraqi good enough.&rdquo;

As U.S. and Iraqi officials negotiate a new security agreement to allow U.S. troops to remain in an advisory and training capacity, many senior U.S. military officers in Anbar province and elsewhere say the Iraqis are ready to take over security without the United States, despite persistent problems with sectarianism and due process.

&ldquo;If the mission in Anbar were to end tomorrow &hellip; the organizations here right now are fully competent to maintain security,&rdquo; said Col. Tim Kehoe, deputy commanding officer of the 2nd Advise and Assist Brigade, 82nd Airborne Division. &ldquo;If you want to know what else they need from us, I would say, &lsquo;Not much.&rsquo;&rdquo;

No one is saying that Iraqi security forces are ready to keep everyone safe. Military officials will say, however, that they are capable of policing Anbar and other areas, to handle a certain level of violence there.

Anbar province, which constitutes about one-third of Iraq, was mostly spared from the violence that erupted Aug. 15, when dozens of attacks throughout Iraq were launched, presumably by al-Qaida in Iraq. They killed at least 90 people and caused some to doubt whether the 650,000 Iraqi security forces personnel have made the gains that U.S military officials say they have.

Senior officials point to statistics showing attacks against U.S. and Iraqi forces dropping from 145 per day in 2007 to about 14 per day now as proof of progress.

But officials acknowledge that structural problems within the Iraqi security forces are preventing them from stopping coordinated terror attacks.

&ldquo;What they&rsquo;re lacking is that national database that can fuse intelligence together from all the different sources that they have,&rdquo; said Brig. Gen. Michael Smith, director of the Iraqi Training and Advisory Mission-Police. &ldquo;They may find in time that they had a lot of this information out there, but no one ever linked all of these different data points together.&rdquo;

Another factor working against the quality of the nation&rsquo;s police is the uneven commitment to due process, Smith said.

The national leadership in Baghdad is committed to evidence-based prosecutions, he said, citing recent training of police on DNA testing and forensics at a new, state-of-the-art lab as an example.

But the course pursued by the nation&rsquo;s leaders doesn&rsquo;t always hold in the field. Confessions &mdash; reportedly often obtained by beating suspects &mdash; are still valued over evidence.

Hossein Mijbil, an Iraqi policeman for the past seven years, disagreed, but not by much.

&ldquo;I think about 80 percent, of course, is getting the confession,&rdquo; Mijbil said. &ldquo;But with the judges now, it&rsquo;s not only about the confession.&rdquo;

Judges are becoming more scrupulous about requiring warrants and other commonly accepted aspects of a justice system, U.S. trainers and Iraqi police said. But judges, like Iraqi police and soldiers, often find themselves subject to sectarian and terrorist threats.

&ldquo;The judges aren&rsquo;t making decisions, because they&rsquo;re afraid they&rsquo;re going to get killed,&rdquo; said a senior Iraqi military official who requested anonymity because he was not authorized by the Ministry of Defense to speak. &ldquo;We detain [suspects], and then 10 days later you see them on the streets again, because the judges are afraid.&rdquo;

If the U.S. and Iraqi governments do not come to an agreement on troops for next year, the military&rsquo;s training mission will fall to the State Department&rsquo;s Office of Security Cooperation-Iraq, as well as its Bureau of International Narcotics and Law Enforcement. Those offices will concentrate on military sales and upper management training, and would be far fewer in number than the current military training mission.

With or without troops staying behind, the Iraqi security forces will face a host of problems after the U.S. drawdown, including containing al-Qaida-linked Sunni forces and the increasingly lethal Iranian-backed Shiite militias in the south.

They must also quell the sectarian cauldron of Kirkuk, where even Iraqis who want the Americans to leave generally concede that the U.S. presence has prevented factions of Kurds, Arabs and other ethnicities from killing each other.

Perhaps the next big test of Iraqi security performance will come in November and December, when they coordinate with the tens of thousands of U.S. troops leaving the country.

Servicemembers are hoping for a reasonably smooth exit, but know insurgents will take their last potshots.

&ldquo;All the whack jobs are going to want to be the one to say, &lsquo;I was the last one to kill an American,&rsquo; &rdquo; said Maj. Paul Grant, operations officer for 1st Battalion, 325th Airborne Infantry Regiment, 82nd Airborne Division in Ramadi. &ldquo;But we&rsquo;ll be prepared when the time comes.&rdquo;