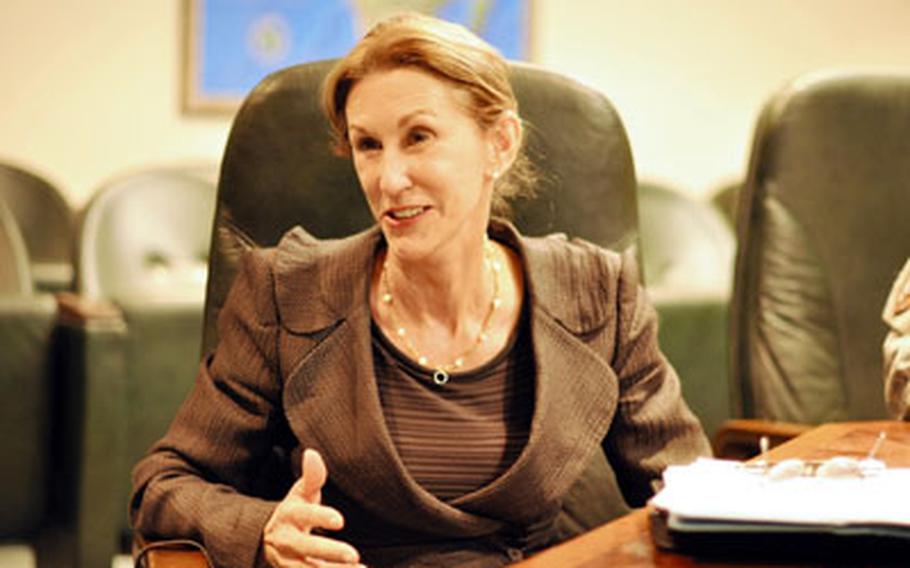 Buy Photo
Army health officials say that the Legionella bacteria found at the Edelweiss Lodge and Resort in Garmisch, Germany, was not a strain typically associated with causing serious illness. (Stars and Stripes)

STUTTGART, Germany &#8212; In 2008, Vicki Huddleston, a former career diplomat with many years of experience in Africa, was out of government service and an in-demand guest speaker on issues related to the African continent.

During a wide ranging talk given at the Chautauqua Institution, a nonprofit arts and education center in southwestern New York, Huddleston&#8217;s comments turned to Somalia and the scars that remain from the tragic 1993 operation dramatized in the book and movie "Black Hawk Down."

Huddleston is no longer a freewheeling analyst. In June, she became the Department of Defense&#8217;s deputy assistant secretary for Africa, helping to oversee Africa policy.

During her first visit to U.S. Africa Command&#8217;s Stuttgart headquarters last week, Huddleston didn&#8217;t backtrack from her stance that certain circumstances require intervention. But as she reflected on AFRICOM&#8217;s role, her language became more circumspect; no calls for hard power. At this time, there is no foreseeable combat role for the military on the continent, she said.

"In general, I hope that the boots that we put on the ground in Africa are only those for training and for civil affairs," she said. "And we will hope that that&#8217;s the case, and if we do a good job of building African capacity, in fact that will be the case."

AFRICOM commander Gen. William "Kip" Ward has reiterated that message repeatedly during his trips to the continent.

At a meeting in May in Mozambique, participants openly questioned Ward about AFRICOM&#8217;s intentions, saying the U.S. command was more interested in achieving "global domination" than about building partnerships

Ward kept on message, saying: "Our goal is to contribute to the peace and stability in the region and do our best to help deter and prevent conflict. Anything we do has the support and acceptance of that nation. In other words, we provide security assistance that you ask of us."

Huddleston comes to her new post with a background heavy in diplomacy. She has served as deputy assistant secretary of state for Africa and was the U.S. ambassador to Madagascar and Mali. She served as acting ambassador in Ethiopia.

Huddleston said AFRICOM has been effective at building military-to-military partnerships around the continent. But going forward, it will be important for more development efforts in Africa to be civilian led.

"Does (AFRICOM&#8217;s work) meet an objective of the United States government? Very definitely: stability, building up local capacity. So all that&#8217;s good. Would I think that USAID and the Department of State and NGOs should be involved more heavily in this type of activity? Yes," Huddleston said.

As AFRICOM looks at future projects, Huddleston said it is her preference that the command concentrate on places such as northern Mali and other isolated areas where there are security issues. However, the use of U.S. combat troops in Africa should only be considered in extraordinary circumstances.

"I think it would have to be a very, very difficult situation in which, first of all, the country involved &#8212; the government &#8212; would have to ask, in which the international community, the African Union, the United Nations would have to want the United States to become involved. Those are the criteria I think that you would look for if you were going to think of combat boots," Huddleston said.