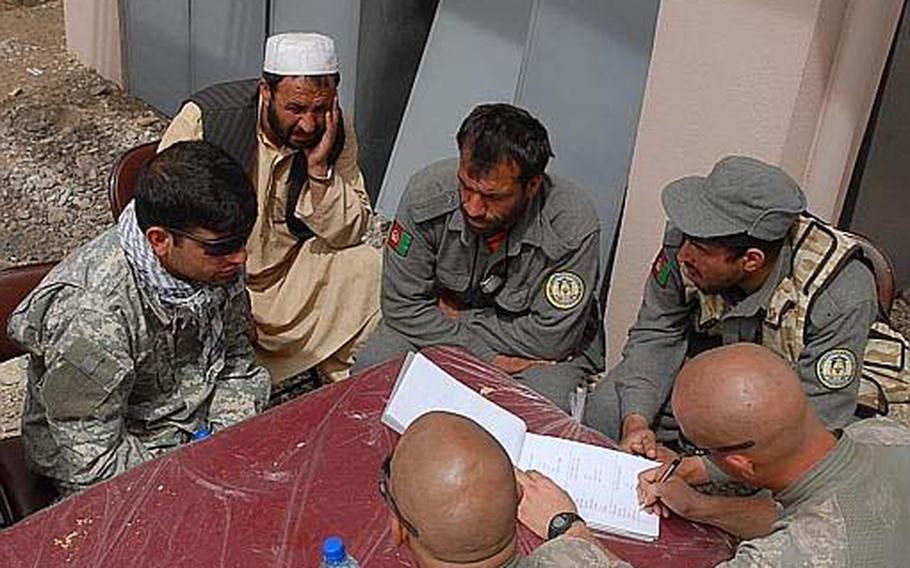 American soldiers talk with Afghan National Police in the Arghandab district Thursday about supplies they need to improve their checkpoints. (James Warden / S&S)

ARGHANDAB, Afghanistan &#8212; Haji Abdul Jabar Khan was happy to tell the American advisers about his efforts to expand security for his area. The leader of the Arghandab shura, or council of elders, said Thursday that he pressed Afghan leaders in Kabul for more National Police in this district north of Kandahar.

Capt. Kenton Patrick, the police mentoring team leader for the area, had different priorities, though. Police in the area need training more than they need additional numbers, he told Khan, who quickly agreed.

Instead, Combined Security Transition Command&#8211;Afghanistan has created a 10-month Focused District Development course for police. The program begins with an eight-week basic course, during which more-professional Afghan National Civil Order Police temporarily take over for the local police. Once the local police complete the course, they return to their districts and continue working with police mentoring teams.

"Everybody knows that when they pass FDD, they are a changed man," said Zamari Han, the Arghandab police chief.

Districts that have gone through FDD have shown a 66 percent decrease in Afghan casualties, which CSTC-A leaders say shows that police are providing security.

But as of March 15, only 52 of the 365 police districts in Afghanistan had gone through the program, according to CSTC-A. More than 3,000 members of the 80,000-strong police force have attended the basic course. But that leaves a huge majority of the National Police without any formal training.

Arghandab sent 127 police to the course, but about 100 other members on the force never attended. Patrick said he&#8217;d like Khan to push for an extra FDD cycle to get the rest of the Arghandab force trained.

"It pulls a group pretty tight together &#8212; makes tight bonds," he said during an interview.

Part of the problem is that CSTC-A has long been critically short of advisers. A fact sheet from the command estimated that it needs an additional 2,300 trainers to properly mentor police districts.

President Barack Obama has made increasing the number of advisers a cornerstone of his new strategy for Afghanistan. Earlier this month, NATO leaders said they would establish a NATO training command to coordinate and step up training of officers for the Afghan national army and police, and that there would be extra funding for training.

The number of advisory brigades will double, which will speed up training. But it will still probably be December 2011 before all the police districts go through the FDD program.

Meanwhile, some Afghan leaders are pushing to grow their forces even more. Han said he needs five checkpoints in addition to the 18 he already has &#8212; an increase of probably 50 men, assuming 10-man checkpoints.

Patrick said he thinks some Afghan leaders are pushing for extra forces because they equate the number of men they oversee with more power. He&#8217;s seen the same phenomenon with blossoming numbers of checkpoints, many of which he&#8217;d prefer to see consolidated so that the police spend more time patrolling.

By contrast, extra training would help improve basic skills such as patrolling and searching vehicles and people, while giving the officers the skills they need to better manage their administrative and logistic responsibilities. The key, he said, is having a detailed, well-thought out plan &#8212; not just throwing more people at the problem.