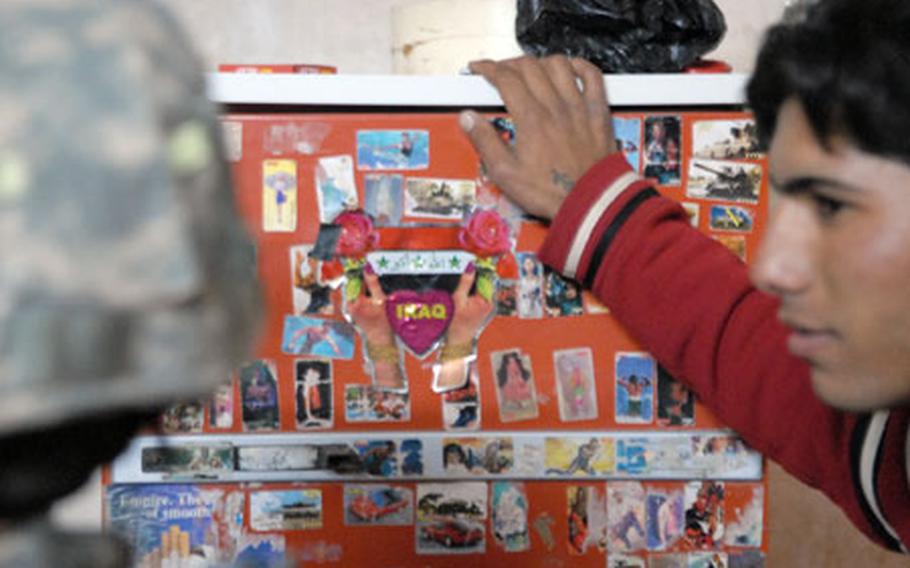 A young Iraqi talks to a soldier of the 2nd Battalion, 27th Infantry Regiment during a patrol through his neighborhood Feb. 27. (Zeke Minaya / S&S)

A young Iraqi talks to a soldier of the 2nd Battalion, 27th Infantry Regiment during a patrol through his neighborhood Feb. 27. (Zeke Minaya / S&S) 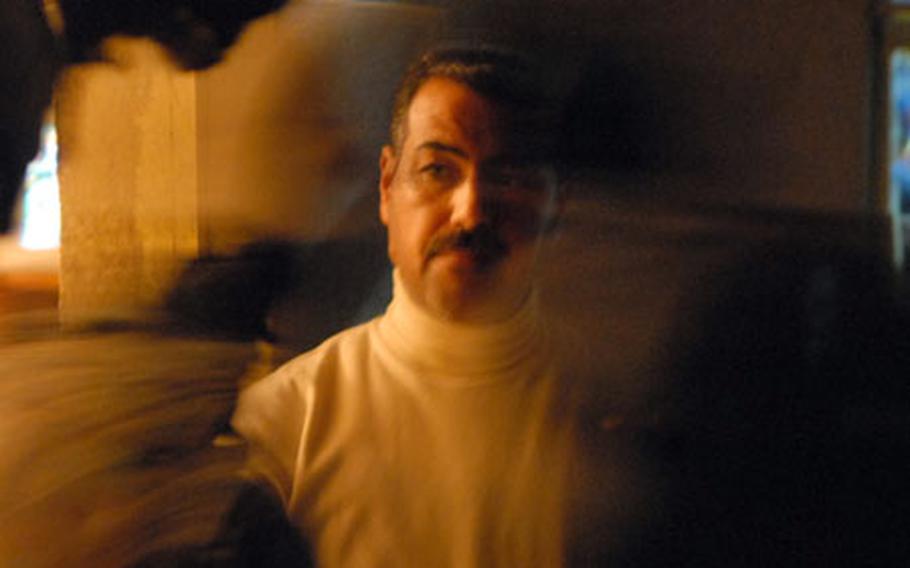 An Iraqi man watches American soldiers on patrol going in and out of his home in Hawijah on Feb. 27. (Zeke Minaya / S&S) 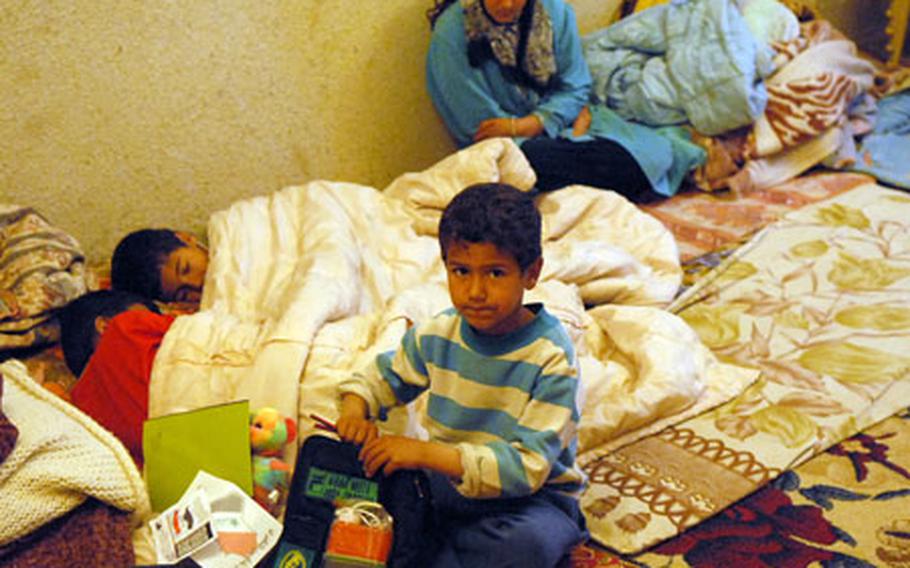 A young Iraqi boy opens a gift he received from American on patrol through his neighbor in Hawijah on Feb. 27. (Zeke Minaya / S&S) 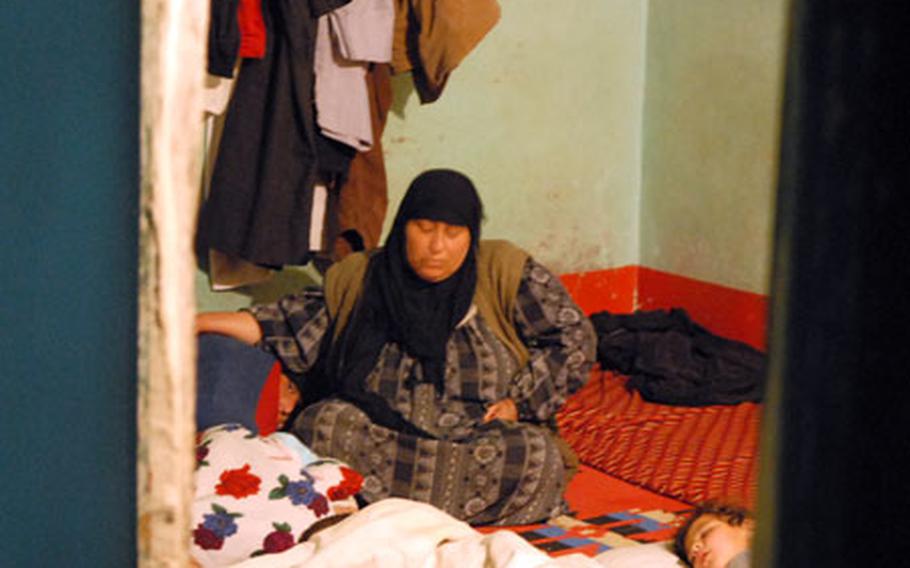 An Iraqi woman waits with her family as American soldiers search her house in Hawijah on Feb. 27. (Zeke Minaya / S&S)

HAWIJAH, Iraq -- With the curfew in effect, the dogs had full run of the streets. Strays darted from behind piles of garbage and cinder blocks to bark at the convoy of Humvees that lumbered through the narrow alleys.

The soldiers of the Hawaii-based 2nd Battalion, 27th Infantry Regiment found the assigned street for the evening. They exited the vehicles and shot glances at the darkened rooftops of the squat houses before they began knocking on doors.

Night patrols are a balancing act for the soldiers based at Forward Operating Base McHenry. They question men of military age and search for weapons while handing out care packages and chatting up residents. In each Iraqi they meet, U.S. soldiers look for signs of friend or foe.

On this night, the Iraqis, in turn, also seemed to be deciding what to make of these soldiers who crowded into their homes in the middle of the night with guns and gifts, who smiled at their children and stared down the men.

The U.S. soldiers secured both ends of the streets. Over a loud speaker they played a message in Arabic over and over that urged residents to call a tip line with reports of suspicious activity.

A young soldier banged on the front gate of a courtyard with his boot, before stepping back quickly, weapon at the ready. The clanging metal of the unfastened latch echoed down the empty street before the doorway swung open and a column of soldiers streamed past a middle-age Iraqi man in a night shirt.

After the entrance, an officer called a sergeant over.

Inside, U.S. soldiers supervised as their Iraqi counterparts searched through closets. Iraqi soldiers had tried in the past to pocket belongings and had to be watched, U.S. soldiers said. The owner of the house looked on, annoyed that his things were being disturbed.

U.S. soldiers questioned a young man in his 20&#8217;s who sat on the floor in the living room. He said he had tried to become a police officer, but reconsidered after being threatened by insurgents. The U.S. soldiers encouraged him to sign up anyway. It will take people willing to stand up to insurgents to bring stability to Iraq, the Americans said. The young man nodded.

In the next house, the same message got a different reaction.

Down the block, an officer stopped in front of a closet covered in stickers and called over a high-school age Iraqi boy. The officer pointed to a sticker, turned to an interpreter and said, &#8220;Tell him that Bruce Lee was my hero growing up,&#8221; after spotting the martial arts actor among the pictures of movie stars and cars. The boy broke into a smile after the translator delivered the message. They stood and talked for several minutes.

The mood was considerably more tense, however, several houses down when the patrol entered an apartment, causing an Iraqi man to break out into tears.

A soldier pulled the man aside.

&#8220;I&#8217;m two different people,&#8221; he offered in explanation for his emotional outburst as he wiped tears away. After some confusion, the patrol learned the Iraqi claimed to be schizophrenic. The Americans relaxed.

One of the final searches was made in a humble, two-room flat with a thatched roof and concrete floor. A thin, dark-haired man said he was a teacher and lived there with his family. No, he told Americans, he didn&#8217;t know any bad people. In these dangerous times it was safest to have no friends at all and keep to yourself, he said.

The man pointed to the unraveling roof and managed to fumble through a single word of English.

A U.S. soldier replied that if things get better in Hawijah, then perhaps coalition troops would be able to help repair his home.