U.S., NATO and Afghan forces train together at Hohenfels 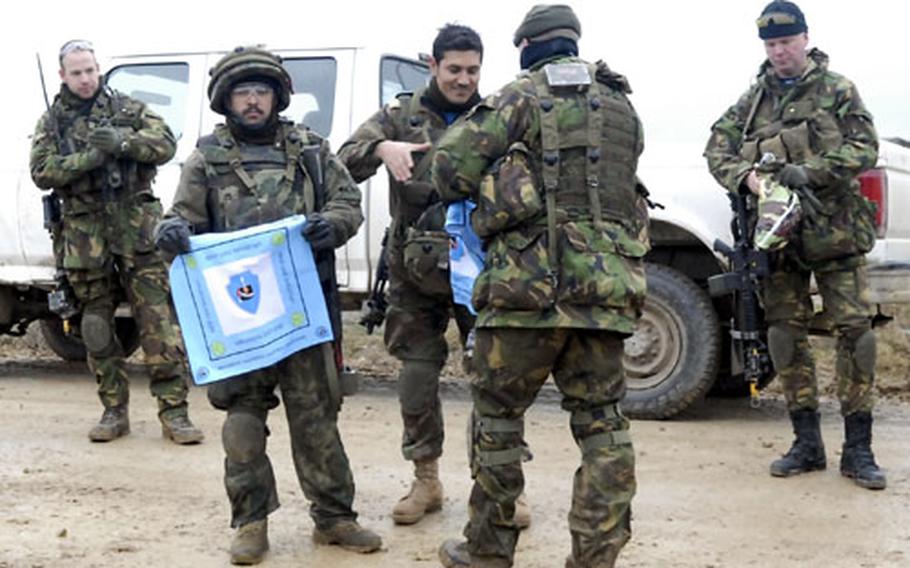 Afghan Army Sgt. Maj. Aminullah Sadiqi holds a flag presented by soldiers from the Dutch Army Wednesday following an exercise at a mock village in Hohenfels, Germany. The event brought together NATO forces with Afghan and U.S. soldiers in preparation for deployments to Afghanistan. (Charlie Reed / S&S)

Afghan Army Sgt. Maj. Aminullah Sadiqi holds a flag presented by soldiers from the Dutch Army Wednesday following an exercise at a mock village in Hohenfels, Germany. The event brought together NATO forces with Afghan and U.S. soldiers in preparation for deployments to Afghanistan. (Charlie Reed / S&S) 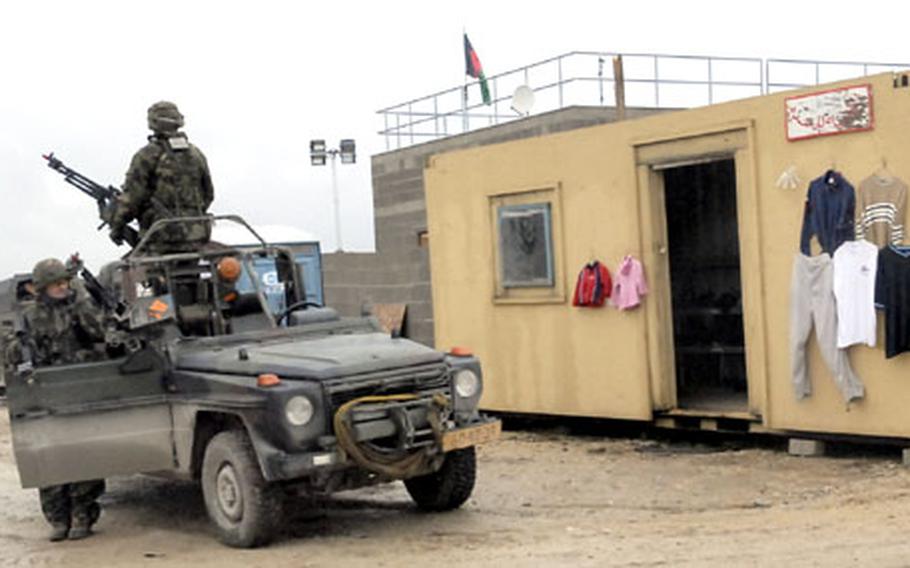 HOHENFELS, Germany &#8212; While U.S. and other NATO forces train the Afghanistan National Army to fight insurgents, the country&#8217;s fledgling soldiers are proving to be an invaluable resource to their mentors in preparation for deployment.

At the Army&#8217;s Joint Multinational Readiness Center here in rural Bavaria, about 300 coalition forces from more than a dozen countries completed a two-week training exercise Wednesday with 70 Afghan soldiers &#8212; the fifth in a series of Operational Mentor and Liaison Team rotations for troops bound for Afghanistan.

The instructors teach courses and supervise troops in action, providing on-the-spot feedback and assistance with after-action reviews. Most of them have recent combat experience and stay in touch with U.S. forces downrange so they can adjust training to reflect what&#8217;s happening on the ground.

The war games &#8212; including meetings with tribal elders, gunbattles with insurgents and roadside bombs &#8212; are designed to be as realistic as possible. However, folding Afghan soldiers in the mix over the past year has added a new level of insight and preparation, said Lt. Col. Jody Petery, who heads an observer/controller team at Hohenfels.

Petery oversaw an urban operations exercise with Dutch, Canadian and Afghan soldiers early Wednesday morning in one of several mock towns that dot the 10-by-20-kilometer training ground. Soldiers and civilians &#8220;inhabit&#8221; the neighborhoods, acting as villagers and opposing forces.

The training is a combination of exposing Western and Afghan troops to one another and instilling all non-U.S. forces with a &#8220;uniform American doctrine&#8221; to eliminate potential confusion when the multinational units converge in Afghanistan, Petery said.

Molding the Afghan soldiers is particularly tricky, he said.

&#8220;Learning the best way to motivate them without offending them is one of the most important things,&#8221; he said.

For Afghan soldiers, training with their more-experienced U.S. and NATO counterparts goes beyond just a lesson in teamwork.

Sadiqi, one of the few Afghan soldiers who speaks English, said his army is slowly implementing U.S. military concepts such as giving more authority to noncommissioned officers and promoting soldiers based on their abilities instead of their connections to those in power. Education and leadership are key to raising the bar for Afghan soldiers, 65 percent of whom cannot read or write, he said.

From the obvious language barrier to the more subtle cultural differences, Western soldiers contend that tackling the learning curve before going downrange is invaluable.

The Afghans &#8220;are very passionate and brave and want to go forward no matter what,&#8221; said Dutch army Maj. Haran Gorissen, whose unit deploys to Uruzgan province next week. &#8220;We have to tell them to calm down sometimes because they want to attack everything.&#8221;

Minor yet still noteworthy, said Gorissen, was dispelling the misconception that all Afghan men have full beards and also making troops aware that the seemingly universally accepted thumbs-up sign is considered an obscene gesture in the Muslim country.

While Secretary of Defense Robert Gates this week criticized NATO nations for not supplying the promised number of trainers, infantry troops and helicopters for the war, American military officials in Hohenfels contend the training center has seen a steady increase in NATO troops en route to Afghanistan.