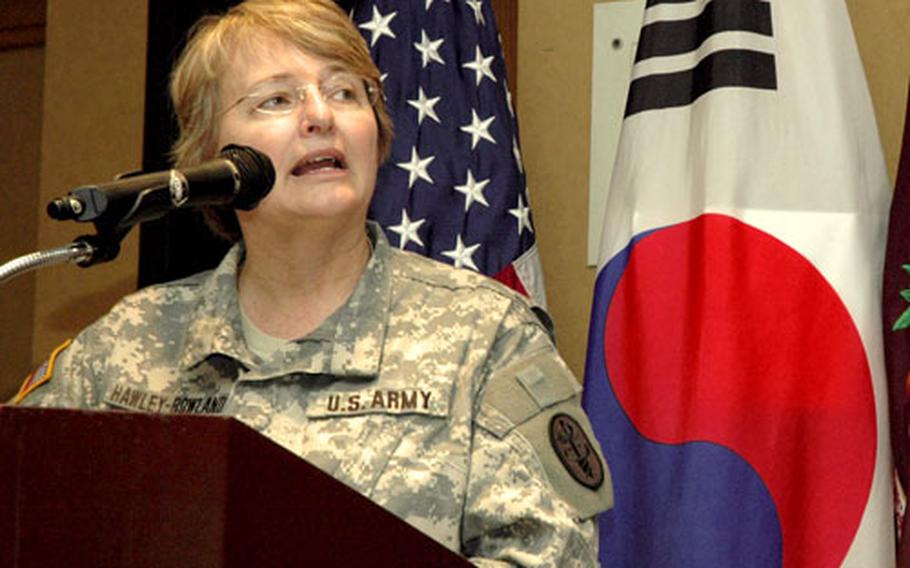 YONGSAN GARRISON, South Korea &#8212; The military is considering a unified medical command that could combine health-care staff from all branches, according to the Army&#8217;s top medical officer in the U.S. Pacific Command.

The joint command would put a four-star general in charge of all military doctors, nurses and health-care facilities, according to Maj. Gen. Carla G. Hawley-Bowland, commander of Pacific Regional Medical Command at Tripler Army Medical Center in Hawaii and the Army&#8217;s Pacific command surgeon.

It&#8217;s a move that would standardize roles, equipment and manpower for the military&#8217;s medical mission: providing care on battlefields, on installations during peacetime and across the world during natural disasters, Hawley-Bowland said Friday morning.

Hawley-Bowland also spoke Friday at the 18th Medical Command Medical and Nursing Conference on Yongsan Garrison in Seoul about the military&#8217;s evolving mission and called for more training for medical personnel sent to help nations after natural disasters.

&#8220;I think we need to train more in humanitarian assistance,&#8221; she said Friday morning before more than 100 nurses, doctors and other medical personnel stationed in South Korea.

The general reflected on recent assistance in Pakistan after a devastating earthquake. There, U.S. military health workers arrived about three weeks after the quake and found patients suffering from infections and broken limbs.

Doctors and nurses in similar situations need to be ready to provide long-term care, help their patients take over the treatment and make medical decisions that save lives. But those goals must also fit with the local community&#8217;s ability to sustain that care, the general said.

Hawley-Bowland, who took command at Tripler in September, also commended efforts in Iraq, Germany and other medical facilities that are caring for servicemembers wounded at war, especially Landstuhl Regional Medical Center in Germany, where many servicemembers are brought for treatment.

The general&#8217;s talk came on the last day of the weeklong conference. The meetings are held each year to help medical personnel stationed in South Korea earn continuing education credits, according to Maj. Dale Gatlin, the aviation medical consultant in South Korea and director of the conference.