U.S. missile defense up for debate in U.K. 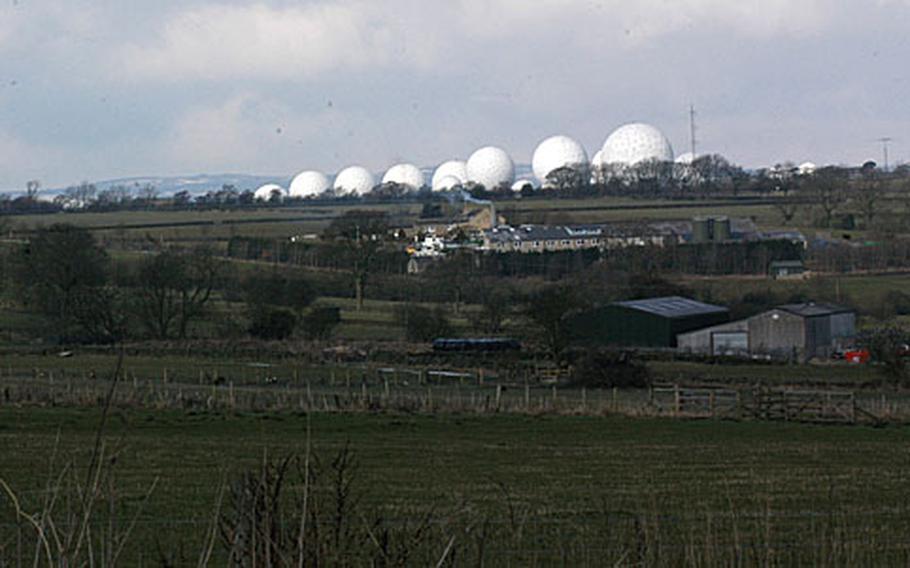 The "radomes" of RAF Menwith Hill, stand out near the town of Harrogate in England. In July, the Ministry of Defence announced that it would be host to part of a proposed U.S. missile defense program at Menwith Hill, which is already home to a National Security Agency eavesdropping station. (Ben Murray / S&S)

RAF MILDENHALL, England &#8212; A Member of Parliament has filed a motion for an open debate on the proposal to locate a technical section of the controversial missile defense program at RAF Menwith Hill.

Martin Horwood, a member of the Liberal Democrat party, introduced an &#8220;early day motion&#8221; last week in Parliament in response to concerns from a constituent.

The motion was signed by Phil Willis, the Member of Parliament who represents Harrogate, a wealthy Yorkshire town that is home to many Americans stationed at RAF Menwith Hill.

The motion is largely symbolic and Parliament is not expected to hold a debate on the topic. The program has prompted a wave of protests across the United Kingdom and further complicated America&#8217;s ambitious plan to establish a missile defense program in Europe.

Horwood&#8217;s motion was in response to the July announcement by the Ministry of Defence that it would be host to part of the system at the 560-acre Yorkshire facility already home to a National Security Agency eavesdropping station.

The ministry announced its decision a day before Parliament&#8217;s summer recess and before representatives debated the topic.

Earlier this year, Member of Parliament Jeremy Corbyn proposed a motion against hosting the missile defense system, asserting it &#8220;will encourage a new nuclear arms race&#8221; and &#8220;put the U.K. in the front line in future wars.&#8221;

A U.S. Air Base in northern Japan on Friday deployed a similar system. The mobile missile-tracking system is meant to protect against the missile threat from North Korea, Japanese defense officials said.

It is the first mobile U.S. missile tracking system to be deployed in Japan.

Protests against the U.K. proposal have been staged recently outside RAF Menwith Hill as well as RAF Croughton, home to the 422nd Air Base Group, which handles military communication between Europe and the U.S.

One of Britain&#8217;s most prominent peace activists favors Harwood&#8217;s motion.

&#8220;It is a disgrace that the government has secretly agreed to the integration of Menwith Hill into the missile defence system when the overwhelming majority of the public wants to see a more independent foreign policy,&#8221; Kate Hudson wrote to Stars and Stripes in an e-mail Wednesday. &#8220;We welcome this motion, which simply calls for what [former Prime Minister] Tony Blair promised &#8212; an open debate.&#8221;

Hudson is chairwoman of the Campaign for Nuclear Disarmament. She was a key figure in last summer&#8217;s monthlong protest outside RAF Mildenhall.

Meanwhile, a defense analyst said Wednesday that much of the furor over missile defense is premature.

&#8220;Let&#8217;s be honest, this thing&#8217;s not working yet. So it&#8217;s fairly presumptuous to worry about hosting it,&#8221; said Andrew Brookes, an analyst with the London-based International Institute for Strategic Studies.

Brookes said the United Kingdom favors integrating the proposed system into a NATO framework that would possibly include stationing missiles in Poland and radar sites in the Czech Republic.