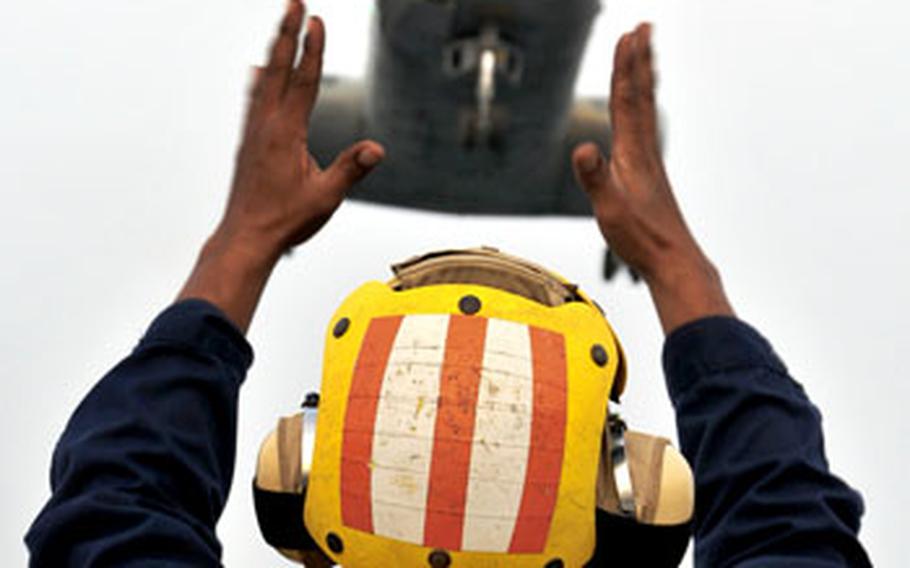 YOKOSUKA NAVAL BASE, Japan &#8212; A faint voice rising out of Padang city&#8217;s earthquake-flattened streets turned a survey mission into a rescue operation for three members of the Okinawa-based 353rd Special Operations Group in Indonesia on Tuesday.

A pararescueman reported hearing a voice and began crawling through the rubble of an obliterated hotel with two other airmen and five Indonesian workers.

&#8220;There&#8217;s still a glimmer of hope,&#8221; said Navy Chief Petty Officer Ty Swartz via phone from Jakarta around noon Wednesday. &#8220;They were crawling around in the building for at least six hours last night and called it off (for the night) because of darkness. They&#8217;re really working hard on it.&#8221;

The aftermath of the Sept. 30 earthquake is now viewed in Padang&#8217;s city center as more a recovery than a rescue mission, Swartz said. The United Nations said least 1,100 have died in the disaster and thousands have been displaced. The Associated Press reported the official death toll stood at 704 as of Wednesday evening.

But while few people could be expected to survive for a week while trapped in rubble, the realization that many more will die without basic supplies has the military and other aid groups scrambling to coordinate supply runs to Indonesians in remote villages cut off from the outside world.

The lone road to some of those villages north of Padang is buried in mud and debris. Marine Corps CH-53 heavy-lift helicopters aboard the USS Denver should be able to help, Navy officials said.

The Sasebo, Japan-based ship was initially expected Wednesday but was delayed while transiting the Philippines. It should arrive with the Yokosuka, Japan-based USS McCampbell on Friday, Swartz said.

There are currently about 150 servicemembers on the ground, including military medical teams treating hundreds of patients each day and working with local doctors and nongovernmental aid organizations, Swartz said.

By Saturday, there should be about 1,400 servicemembers operating the military&#8217;s largest humanitarian operation in Indonesia since the tsunami disaster of 2005, Swartz said. The force will include at least 400 Marines from the 3rd Marine Expeditionary Brigade.

The Marine brigade also forms a large part of the roughly 2,900-servicemember force currently helping the Philippines recover from two devastating storms that have displaced hundreds of thousands of people, according to U.N. figures.

Most were treated for trauma, water immersion injuries, infections and exacerbated pre-existing injuries, Tarantino said in an e-mail response from the Philippines.

&#8220;There have been no significant outbreaks of communicable disease,&#8221; Tarantino said.

They have moved nearly 25,000 cubic feet of debris and are currently working in the Sitio Olandes, Marikina City area, Macias said.