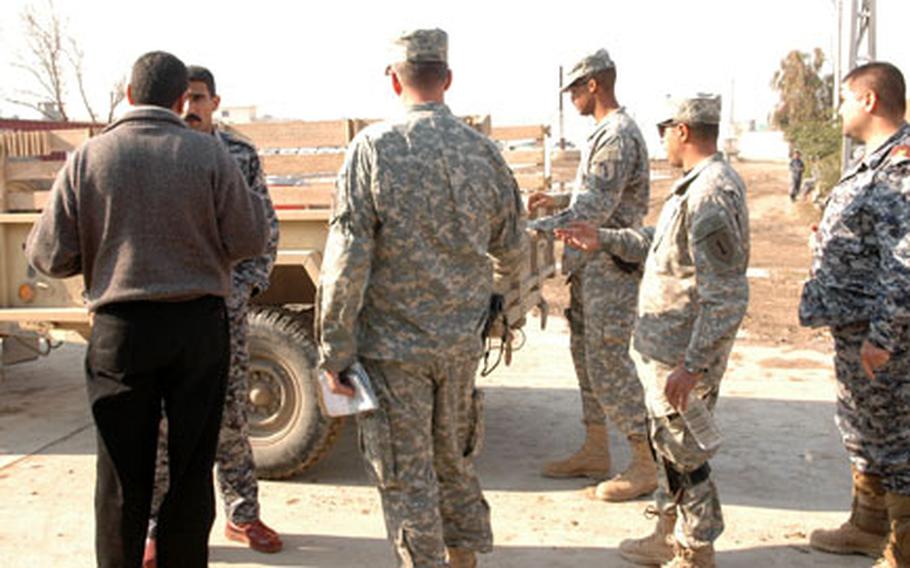 BAGHDAD &#8212; Accused by some of ties to militias; hailed by others as the key to the security of the country; often outgunned, underpaid and overwhelmed by political forces beyond their control, few groups are as controversial in Iraq as the National Police.

Sistare, an Army Reserve officer who in his civilian life is town manager of Jaffrey, N.H., is particularly aware of the increased scrutiny.

The 8-2 is the only Iraqi police brigade to have been suspended, wholesale, by the Iraqi Ministry of the Interior, which pulled the entire 700-man unit offline Oct. 4.

Now they are back, vetted, retrained, with new leadership. And it&#8217;s up to the NPTT to help the 8th Brigade as it wipes the slate clean and shows Baghdad a new side.

The brigade&#8217;s suspension followed the mass kidnapping of 24 Sunni workers in a frozen food factory in the southwestern Baghdad neighborhood of Amil, which the 8th Brigade was responsible for patrolling.

Sunnis in Iraq&#8217;s government accused the Shiite-dominated brigade of turning a blind eye to sectarian crimes.

They also sent the brigade&#8217;s rank-and-file back to school for retraining, at Iraq&#8217;s advanced police academy at Numaniyah.

To help build a working relationship with the brigade, the NPTT went along to Numaniyah for the three-week training session, which began Nov. 15.

The curriculum included police skills, such as investigations, interrogations, rules of law and protection of human rights.

But just as valuable, if not more, West said, was the time the Iraqis spent with their mentors.

The 1st and 2nd battalions of the 8th Brigade, each of which has 500 police, finished training on Dec. 14, took leave and began operations in early January.

Along with new commanders, the 8th Brigade was reassigned by the Interior Ministry to patrol a new sector in Baghdad&#8217;s east side, so it could start fresh with the population, Sistare said.

In February, the money already is earmarked for local contractors to do carpentry and plumbing repairs to the barracks.

NPTTs also help their police units plan different kinds of operations, and often, go along on the actual missions.

In early January, the team accompanied Ali during a nighttime visit to six of his checkpoints, spread far and wide around East Baghdad.

The team followed the general as he rode through the twisted, trash-strewn streets in his personal vehicle, accompanied by a few truckloads of police.

At each checkpoint, Ali checked weapons, patted backs and offered words of encouragement. At the end of the evening, Sistare said he was pleased by what he had observed: at each checkpoint, the Iraqi police had been awake, in uniform, armed and ready.