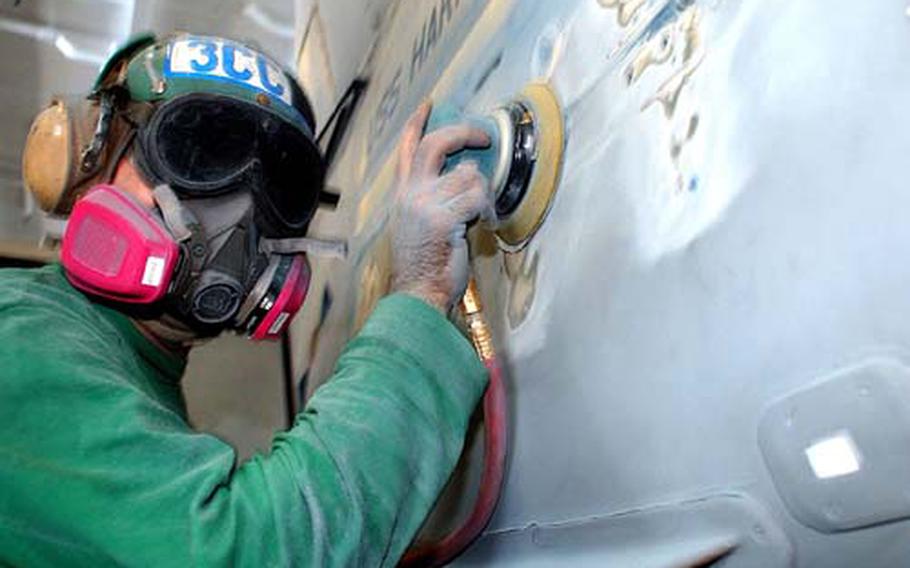 Petty Officer 3rd Class Ross Christie strips old paint from an F/A-18 Hornet in a hangar bay aboard the USS Harry S. Truman in this 2004 photo. Hexavalent chromium is commonly used as a corrosion inhibitor in paints and primers used by the military, but its toxic nature means it has become a topic of controversy. (Jay C. Pugh / Courtesy of the U.S. Navy)

It is a highly toxic chemical that allegedly sickened National Guardsmen in Iraq and caused the legal battle that inspired the movie &#8220;Erin Brockovich.&#8221;

Now, hexavalent chromium is in the U.S. military&#8217;s sights under a recent Pentagon order to begin finding ways to reduce the use of the carcinogen.

The chemical &#8220;is kind of a Dr. Jekyll and Mr. Hyde,&#8221; said Paul Yaroschak, deputy director for Chemical and Material Risk Management at the Pentagon. &#8220;It is a superb corrosion inhibitor and we use it in primers, paints and coatings. The bad news is it is a very well-known carcinogen at low levels.&#8221;

Lawsuits and spreading concerns over &#8220;serious human health and environmental risks&#8221; are increasing the cost of hexavalent chromium and forcing the DOD to look for alternatives, according to an April order by then-Undersecretary of Defense for Acquisition, Technology and Logistics John Young.

The order requires all military departments to fund and research alternatives in all new applications and provide a detailed explanation for certification if no substitute can be found. Existing weapons systems must be modified where possible.

Reduction goals have yet to be set, but the new policy is expected to create a &#8220;steady decline&#8221; in use over the next decade, according to the DOD Press Office.

But for now, the DOD says hexavalent chromium remains too important to ban outright.

As an ingredient in anti-corrosive coatings, it helps the DOD stave off damaging rust that costs it between $10 billion and $20 billion per year, Office of Corrosion Policy and Oversight figures show.

&#8220;It is not technically feasible to institute a ban at this time given the uses of hexavalent chromium in critical systems,&#8221; Yaroschak wrote in an e-mail to Stars and Stripes.

Meanwhile, the Occupational Safety and Health Administration greatly increased workplace protections against the chemical over the past three years. In 2006, the European Union banned its use in a wide range of consumer electronics including radios, TVs, video cameras and household appliances because of health and environmental risks.

Yaroschak said the DOD monitors the health of those who come in contact and knows of no cases in which use by the DOD has caused health problems among servicemembers.

Servicemembers who strip paint from equipment, for example, are among DOD workers who regularly come in contact with the chemical, Yaroschak said. When the chemical is present or being used, personnel are required to wear protective gear and undergo medical monitoring.

OSHA requirements, which the DOD says it adheres to, also limit exposure for workers during an eight-hour day to 5 micrograms per cubic meter of air, down from 50 micrograms before standards were toughened.

But the new OSHA standards may not go far enough, said Dr. Max Costa, a professor and chairman of the Department of Environmental Medicine at the New York University School of Medicine.

Still, Costa said of the DOD&#8217;s direction toward reducing its use of hexavalent chromium, &#8220;If you can find something else that is just as good or almost as good, you are going to protect people from being exposed to it. If it is in the paint &#8230; people are going to be exposed to it.&#8221;

Costa has worked as an expert witness on court cases related to hexavalent chromium exposure, including the 1993 lawsuit depicted in the movie &#8220;Erin Brockovich&#8221; that resulted in $333 million worth of damages paid to more than 600 victims in a California town where the chemical had been illegally dumped in the drinking water supply.

The chemical has again returned to the courtroom after alleged exposures in Iraq.

Mark McManaway, a retired National Guard sergeant, and 15 of his fellow Indiana guardsmen say they developed health problems after being exposed to hexavalent chromium while deployed to the war zone in 2003.

The powdered chemical was left by fleeing Iraqis and became spread around the Basra water plant where the guardsmen were providing security for workers with Texas-based KBR, which was contracted to restore the plant.

The guardsmen filed a lawsuit in December in U.S. District Court for the Southern District of Indiana against KBR. Their complaint contends KBR acted negligently in taking steps to protect people at the site.

KBR, in an Aug. 3 statement to Stripes, maintains it acted properly and immediately notified the U.S. Army Corps of Engineers of the chemical&#8217;s presence and posted signs in Arabic and English cautioning workers. It also said testing showed no dangerous levels of airborne hexavalent chromium.

The lawsuit is expected to go to trial in 2010, McManaway attorney Mike Doyle said.