U.S. military's mission in France concludes with end of operations at Istres 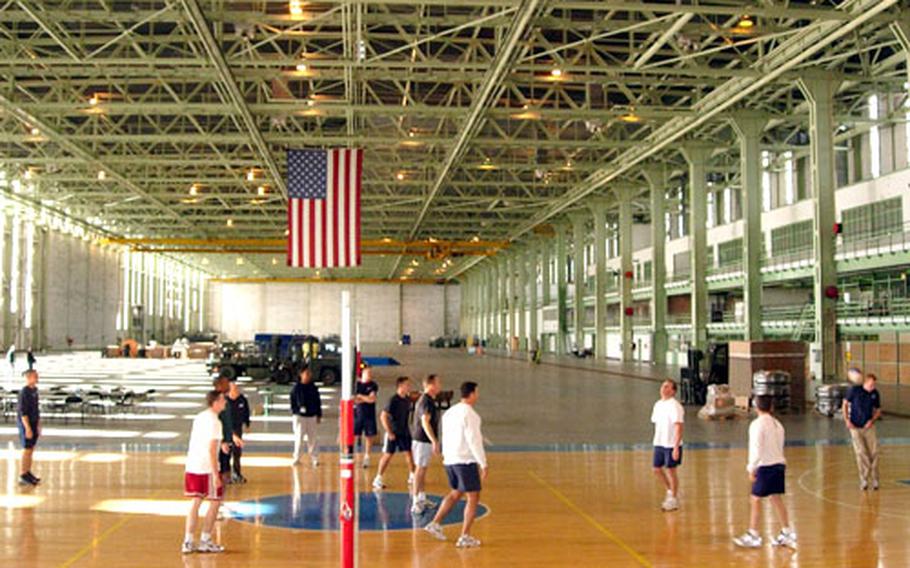 Airmen enjoy a volleyball game inside the Dassault Mercure Hangar at Istres, France. The Air Force has called the hangar home for almost 11 years, but its mission will soon be ending. (Courtesy of U.S. Air Force)

The United States&#8217; lone sizeable military mission in France will soon end when the Air Force finishes its operations at the air base in Istres.

Officials stressed that the American government&#8217;s relationship with the host country &#8212; thought to be chilly after French opposition to the ongoing U.S. mission in Iraq &#8212; has nothing to do with the move.

Malenke says the mission, operating under NATO auspices, just isn&#8217;t needed any more. It was a NATO decision to end the operation a few months short of its 11-year anniversary.

Following World War II, the United States had several bases in France. But under then-President Charles de Gaulle, France pulled out of NATO military operations in the late 1960s, ending the U.S. presence in the country, including in Istres.

France eventually reversed its stance, and with NATO air missions over the Balkans increasing dramatically in the early 1990s, the need for refueling aircraft prompted an American return.

Since then, the mission has centered on the KC-135s, though U-2 spy planes were also based there for a time. At one point, more than 300 American personnel temporarily called Istres home. Five aircraft were assigned on a rotation basis from bases around the globe, though only three have been used recently.

On the ground, the force does all its work in a huge hangar adjacent to the French air base in Istres, a small city northwest of Marseille. The hangar, which is privately owned, will be turned back when the Air Force pulls out.

Malenke, an Air National Guardsman from Wisconsin, is serving his fifth tour in Istres. Airmen have served in rotations lasting from a few weeks to six months over the course of the mission. Many hail from bases in the States and are not active-duty airmen.

&#8220;As someone from the National Guard, this has been one of our favorite deployments in the last 10 years,&#8221; Malenke said.

And not because they spend a lot of time lounging on the beaches in southern France.

Malenke said the weather and scenery certainly aren&#8217;t anything to complain about, but it&#8217;s been the relationships with their hosts that have made the mission stand out.

When it&#8217;s not busy supporting the missions in the air, the American contingent has made appearances at a host of memorials and dedications tied to French and American history.

A small chapter in that history closes this month.