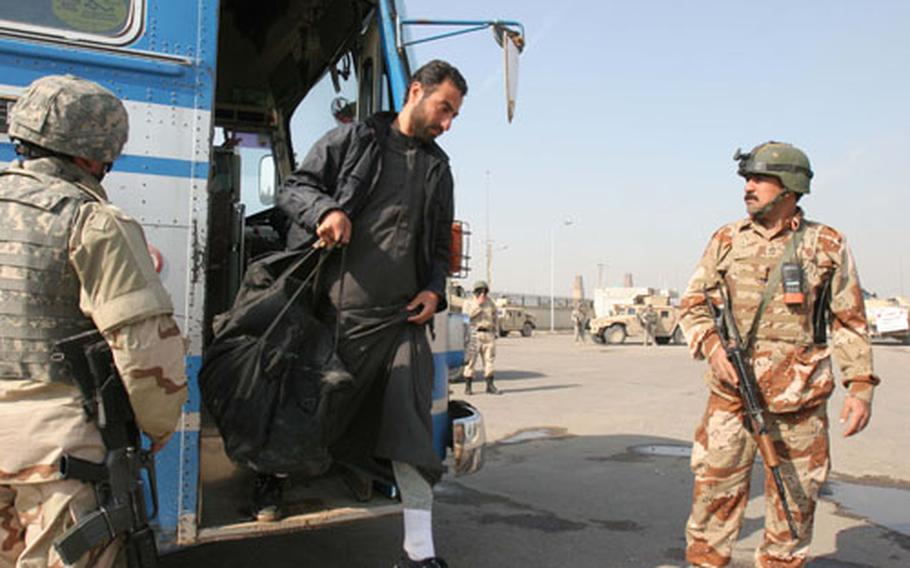 An Iraqi detainee walks from a bus at a central bus station after being released from a Baghdad jail on Sunday. (Hadi Mizban / AP)

A joint American-Iraqi review board has granted the release of &#8220;about&#8221; 50 male detainees from U.S. military prisons in Iraq, officials said Sunday.

The Combined Review and Release Board &#8220;reviewed their cases and recommended release,&#8221; an American news release read, continuing a series of releases over the past year that have freed thousands of former prisoners who had no longer been deemed a security threat.

Last month, U.S. officials included five women among a group of 420 prisoners released after their cases were taken up by the review board. But American officials denied the inclusion of female prisoners had anything to do with the kidnappers&#8217; demands.

The Combined Review and Release Board was established in 2004 and consists of nine members: two each from Iraq&#8217;s ministries of Human Rights, Justice and Interior and three senior officers from Multi-National Forces-Iraq.

To date, U.S. officials said Sunday, the board has reviewed more than 27,200 cases and recommended more than 14,300 detainees for release.

Detainees who are released have &#8220;admitted their crimes, renounced violence, and pledged to be good citizens of a democratic Iraq,&#8221; the military has said after prior prisoner releases. Detainees accused of serious violent crimes such as bombings, torture, kidnapping or murder are not eligible for release.

There have been several other large-scale prisoner releases in the past year, the largest of which were timed to coincide with Ramadan, the Muslim holy month. Some 1,300 prisoners were released from Abu Ghraib after officials said they had reviewed their cases and gotten promises from the prisoners that they would not commit crimes and would participate in a new Iraqi political system.

U.S. officials have said they will close Abu Ghraib and hand it over to the Iraqis, perhaps within a few months. Three other facilities &#8212; Camp Cropper, Fort Suse and Camp Bucca &#8212; will be the main detention facilities in Iraq and have undergone expansion.