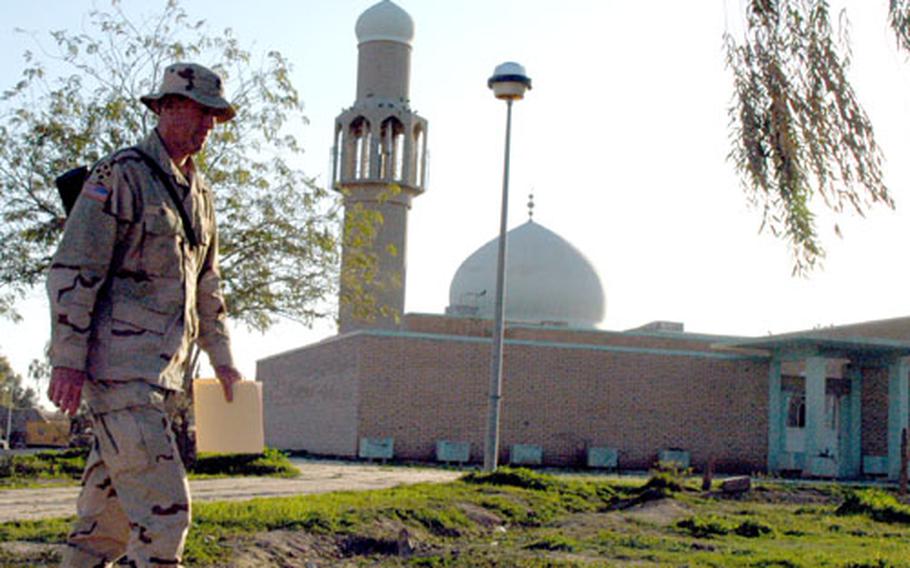 A soldier walks past a mosque at Logistics Support Area Anaconda in Iraq. U.S. military civil affairs officers plan to repair the mosque, which has been empty since the Iraqi air force pulled out of the area 11 months ago. (Seth Robson / S&S)

BALAD, Iraq &#8212; U.S. military civil affairs officers plan to repair a mosque at Logistics Support Area Anaconda that has been empty since the Iraqi air force pulled out of the area 11 months ago.

Maj. Steve Lancaster, deputy civil affairs officer for 13th Corps Support Command, said funding is being sought to repair the mosque so it can be used by Muslim base workers and Iraqi Defense Force personnel.

The mosque was not damaged during fighting to secure the base, but has fallen into disrepair through neglect.

The U.S. military employs 850 Iraqis to service Camp Anaconda. Most are former members of the Iraqi air force who worked at the base before it was taken over by coalition forces last year.

An Iraqi military village outside the base is home to 1,600 former members of the Iraqi air force.

Camp Anaconda is also home to hundreds of Muslim contractors from countries such as India and Pakistan.

The Army has held off repairing the mosque because of concerns that local Iraqis might be offended if non-Muslims entered the building to work on it, he said.

Islam has rules governing holy places, such as taking off shoes before entering a mosque.

The repairs will be done by local Muslim contractors and will involve the imam, or religious leader, from the Iraqi military village, he said.

Both Sunni and Shiite Muslims will use the mosque, he said.

Faisal Khan, employed by Saudi company Tafga as a quality control officer at Anaconda&#8217;s No. 2 chow hall, said he is looking forward to worshipping at the mosque. Five times each day Khan, who is from Kashmir, looks for a quiet place where he can pray in the direction of Mecca.

Khan said Sunni and Shiite Muslims have no problem worshipping together. He added that non-Muslims are welcome inside mosques, as long as they follow the rules.