U.S. military in Europeon the lookout for blood donors 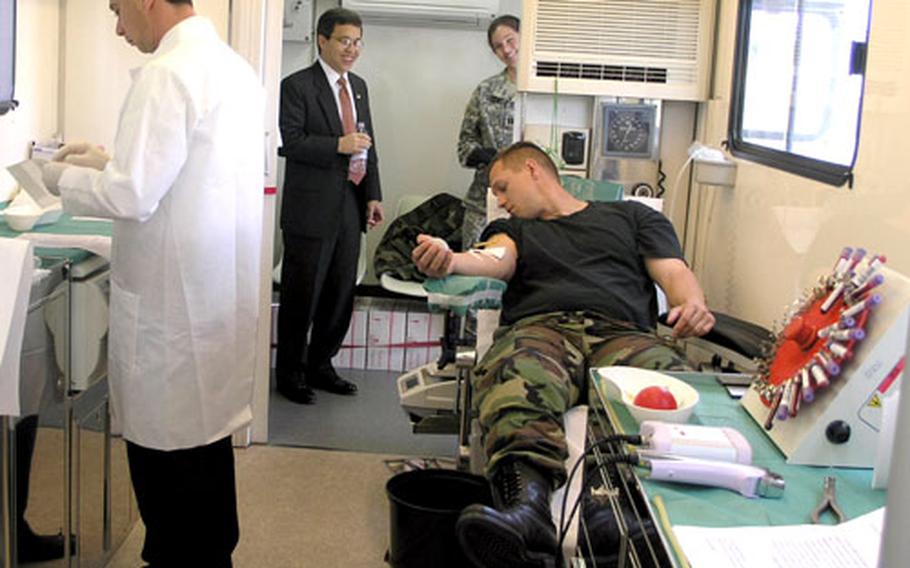 Tech Sgt. Chad Smith donates blood during a blood drive sponsored by the Italian Navy at Camp Darby, Italy, on May 17. The visit, the first to the compound in recent memory, gave Americans and Italians who work on base a chance to contribute blood to Italian servicemembers serving abroad. (Chiara Mattirolo / Courtesy of U.S. Army)

Such drives are rare at U.S. facilities in northern Italy. But this particular drive was even rarer, because it was run by the Italian navy and was to benefit Italian personnel serving in places such as Afghanistan.

About two dozen Americans and Italians on base bared their arms and donated in the first such drive in recent memory. Some were turned away because they didn&#8217;t meet the criteria. But hundreds of others eligible to donate to the Italians wouldn&#8217;t be allowed to give blood if the U.S. military was collecting.

U.S. health officials have estimated that nearly one in three Americans living in Europe aren&#8217;t eligible to donate to U.S. organizations because of Food and Drug Administration guidelines aimed at preventing the spread of variant Creutzfeldt-Jakob disease &#8212; better known as the human version of mad cow, according to Maj. Jose Queseda, director of blood services for Landstuhl Regional Medical Center in Germany.

The guidelines, set in 2002, prohibit blood donations by Americans who have lived in Europe for at least five years since 1980. Americans who spent more than three months in the United Kingdom from 1980 to 1996 also are excluded from donating.

But thousands of Americans affected by the FDA guidelines are eligible to donate to their host country&#8217;s facilities, provided they meet the local criteria.

&#8220;Obviously, every donor, no matter their place of birth, is required to complete the same health-screening questionnaire each time they give blood in England and north Wales,&#8221; said Gareth Bell, a communications officer with the National Blood Service.

England was the epicenter of the mad cow scare in Europe. But cases rarely appear in the media these days. And Bell said Americans who have lived in England for extended periods of time wouldn&#8217;t be turned away only on fears of spreading that disease. After all, they live in the same conditions as the local citizen donors.

He said several drives are scheduled near RAF Mildenhall and RAF Lakenheath in the coming months and donors can book appointments by visiting the organization&#8217;s Web site at www.blood.co.uk.

Germany and Italy have roughly the same guidelines prohibiting people who lived in the U.K. from 1980 to 1996 from donating. But they don&#8217;t carry the same rule prohibiting donations from those who have lived in their countries since 1980.

&#8220;But as with Germans, there are miscellaneous restrictions,&#8221; said Dr. Alexander Markovic, director of the German Red Cross Blood Donation Services West in Bad Kreuznach.

Markovic said all donors in Germany must have medical exams before they donate. There&#8217;s an exhaustive form to fill out and questions to answer, so the donor should be fluent in German. He said another rule, requiring donors to maintain contact information with the center for years after they give blood, makes it difficult for most servicemembers to meet criteria.

&#8220;For that, civilians who remain in one place for longer periods are more suitable to be blood donors,&#8221; he wrote in an e-mail response. German organizations used to hold blood drives at U.S. bases, but no longer do so because of the restrictions have limited the donor pool, he said.

There are dozens of restrictions to donating blood. For a full list of them, check out the Department of Defense Web site here.