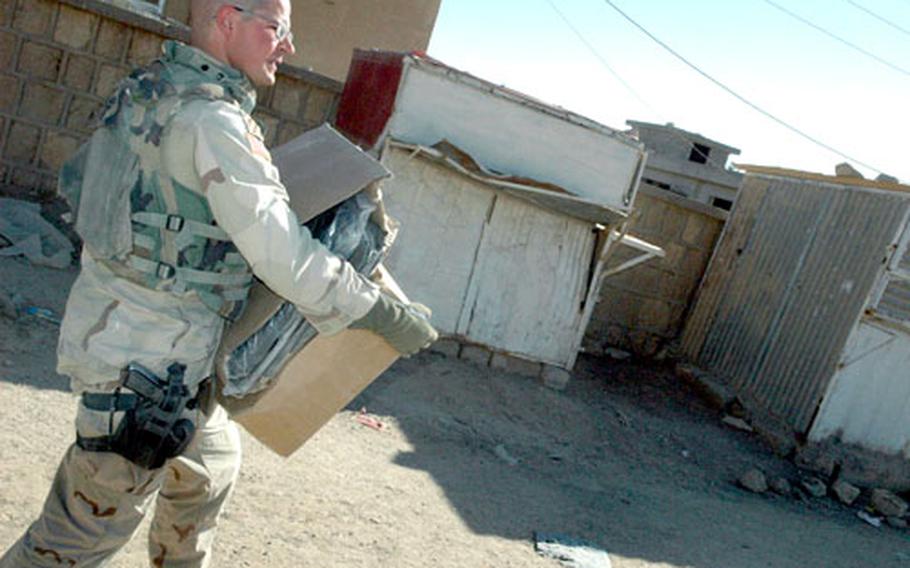 In an effort to combat car bombings in the run-up to Thursday&#8217;s parliamentary election, U.S. military authorities have banned the use of all trucks, cars, motorcycles, bicycles and even donkey carts here for roughly a week.

Soldiers with the 2nd or &#8220;Sabre&#8221; Squadron of the 3rd Armored Cavalry Regiment, and units with the 3rd Iraqi Army Division, began warning motorists of the &#8220;no-roll&#8221; policy late Saturday night in recorded messages and at vehicle checkpoints throughout this ancient city.

&#8220;The biggest danger we have is a suicide bomber at a polling place,&#8221; Maj. Mike Simmering told a joint meeting of U.S. and Iraqi military officers on Saturday.

The policy calls for graduated use of force in responding to the threat of suspected car bombers.

While soldiers have been instructed to warn drivers of the policy on the first day of its implementation, U.S. and Iraqi forces will shoot to disable vehicles if they are driven near polling sites on election day.

Similarly, cars parked on the side of public roads will be destroyed if they are not moved.

The policy will remain in effect until Saturday morning.

While Tal Afar has remained largely calm in the wake of a September offensive against insurgents, U.S. and Iraqi officials want to avoid a repeat of events in the days immediately before the October referendum, when three suicide bombers detonated explosives near U.S. bases and in the center of town.

As it was, Saturday&#8217;s meeting with military officers, election officials and Iraqi police was interrupted by word that several U.S. soldiers were wounded in a suicide car-bombing on the city outskirts Saturday.

The bomber targeted a convoy of vehicles near Fort Tal Afar, which hosts both U.S. and Iraqi troops.

Not long after on the same day, an explosion in the northeastern section of Tal Afar killed three Iraqi army soldiers who were attempting to move an anti-insurgent informant and family from one house to another, the U.S. military said.

The &#8220;no-roll&#8221; order was just one of a number of election preparations American and Iraqi security forces were making over the weekend.

&#8220;Hearts, minds and body bags,&#8221; said the father of three as he hefted a load of the black, vinyl sacks from his Bradley fighting vehicle to the front door of the hospital.

The delivery was a precaution in case of violence during the election.

&#8220;Ah yes, good, these are very important,&#8221; said hospital director Saalih Hayder as Tondre and other soldiers from 3rd Platoon deposited some 50 body bags in the hospital&#8217;s entryway.

Hayder said the hospital was short on resources and the pouches would be very useful in the event of a campaign-season car bombing.

He said he hoped they would not be necessary for the election, but said they would be badly needed in the event of a deadly attack.