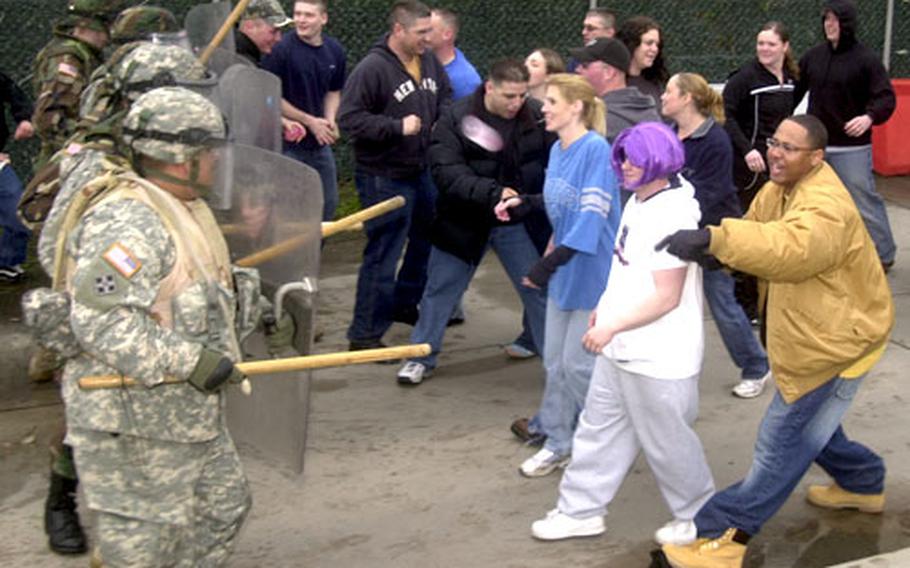 Guards confront a mock riot Thursday at Kleber Kaserne in Kaiserslautern, Germany, during a training exercise in preparation for the World Cup soccer championship. The “rioters” played fans who stormed an Army post after their country lost a World Cup match. (Steve Mraz / S&S)

KAISERSLAUTERN, Germany &#8212; Hurling water balloons and anti-American slurs, an angry mob of soccer &#8220;rioters&#8221; clashed with U.S. military guards at Kleber Kaserne on Thursday morning during training for an unlikely, but plausible, scenario during this summer&#8217;s World Cup soccer championship.

Soldiers with the 66th Transportation Company played drunken soccer fans who marched on Kleber and confronted guards after their country&#8217;s team lost handily to the American soccer team.

Kaiserslautern is one of 12 German cities playing host to World Cup games this summer. The World Cup is the most prestigious soccer tournament and takes place once every four years.

Rioters chucked water balloons as a line of military guards in full-riot gear approached. One troublemaker tossed a simulated Molotov cocktail &#8212; which was nothing more than a plastic water bottle with a rag stuffed in it &#8212; at a car. While neither vehicle was actually lit on fire, nearby smoke machines added to the realism.

The guards quickly repelled the rioters. As instructed for training purposes, neither side engaged the other in physical contact.

Mock casualties from the vehicles were removed from the scene, and firefighters hosed down the vehicle that was supposed to be on fire.

All types of force-protection training takes place throughout the year, said Capt. David Beaman, plans and operations officer with the 37th Transportation Command.

&#8220;Because of the heightened awareness we have now with the World Cup games, we chose to do riot control,&#8221; he said.

However slight the possibility of a soccer riot erupting outside a military post in Kaiserslautern this summer, guards are prepared.

Also on Thursday, senior Air Force and Army leaders in the Kaiserslautern Military Community met to discuss potential force-protection plans for the military during the World Cup.