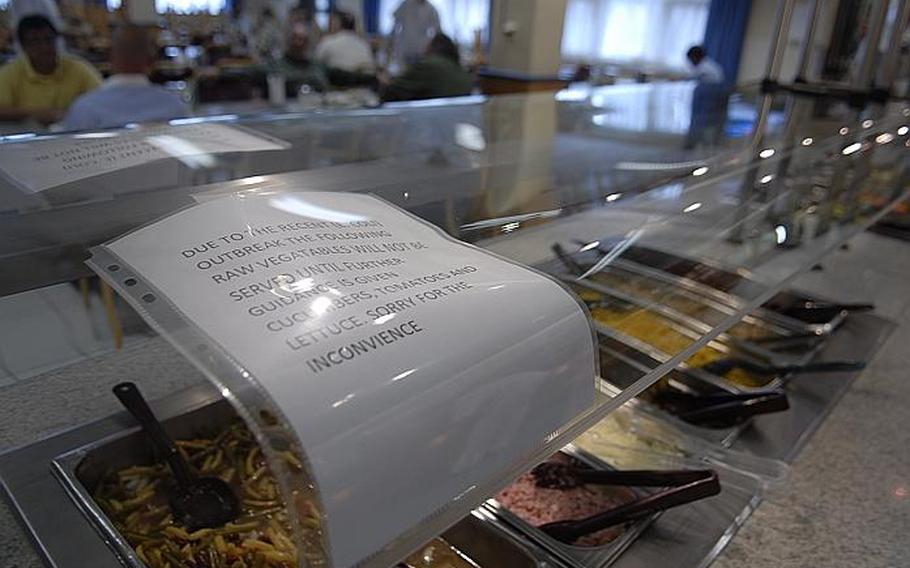 Buy Photo
A sign posted at the salad bar at the Clock Tower Cafe military dining facility on Kleber Kaserne Tuesday informed customers that no raw cucumbers, tomatoes or lettuce were being served because of the current E.coli outbreak in Germany. Military personnel and their families throughout Europe are being advised to avoid these vegetables in raw form. (Jennifer H. Svan/Stars and Stripes)

KAISERSLAUTERN, Germany &mdash; U.S. military dining facilities in Europe and other food service facilities serving U.S. troops are pulling raw cucumbers, tomatoes and lettuce from their menus, in accordance with recommendations by health authorities struggling to find the source of a deadly E. coli outbreak that began in northern Germany and is spreading across Europe.

As of Tuesday, 16 deaths were linked to the E. coli outbreak, including a middle-aged woman in Sweden who recently visited Germany, The Associated Press reported. U.S. military officials said Tuesday that there were no confirmed cases of the E. coli infection among Defense Department personnel and their families in Europe.

At the Clock Tower Caf&eacute; on Kleber Kaserne in Kaiserslautern, the salad bar did not include cucumbers, tomatoes and lettuce. Dining facility staff said the items were removed Saturday, a day after U.S. Public Health Command Region Europe advised U.S. government-sponsored food service facilities in Europe not to serve those vegetables raw.

Across Europe, base eating establishments such as Subway and Taco Bell were serving sandwiches and tacos without raw lettuce, tomatoes and cucumbers.

The Defense Commissary Agency Europe, however, as of Tuesday, was still selling raw tomatoes, cucumbers and lettuce in its stores, according to DECA Europe spokeswoman Leslie Brown.

DECA Europe &ldquo;is working closely with both U.S. Army and Air Force public health officials on the latest information regarding the E. coli event,&rdquo; Brown said in a written statement. &ldquo;Our produce vendors have increased monitoring the produce. We are alerting customers to always wash produce before consumption.&rdquo;

German health officials, meanwhile, are scrambling to find the source of the outbreak. Further lab tests showed that cucumbers from Spain that tested positive for E. coli last week did not have the deadly strain implicated in the current outbreak.

&ldquo;Our hope to find the source for these serious complication cases was, unfortunately, not fulfilled by these first results,&rdquo; said Cornelia Pruefer-Storcks, health minister of the German city-state of Hamburg.

But the warning not to eat any raw and unwashed lettuce, tomatoes and cucumbers is still in effect, since the source of the outbreak is still unknown, said officials with the Hamburg Institute for Hygiene and Environment.

Those products are hard to avoid, especially at restaurants off base, said Army Pvt. Cory Gordon, 25, of the 21st Theater Sustainment Command. He ate some at a local D&ouml;ner stand this weekend, but plans to be more careful. &ldquo;I&rsquo;m probably going to avoid eating those things now,&rdquo; he said.

His buddy, Army Pvt. 1st Class Michael Spruill, 26, said he now has a great excuse to avoid eating veggies and to eat pizza and other fast food &ldquo;all day long.&rdquo;

In Germany, more than 1,150 people have been affected by enterohemorrhagic E. coli, also known as EHEC, bacteria, since early May, according to AP.

As of Tuesday, AP reported that 373 people were sick with the most serious form of the infection &mdash; hemolytic uremic syndrome, or HUS, a rare complication that can cause kidney failure. Cases have now been reported in Sweden, the Netherlands, Denmark, France and Switzerland.