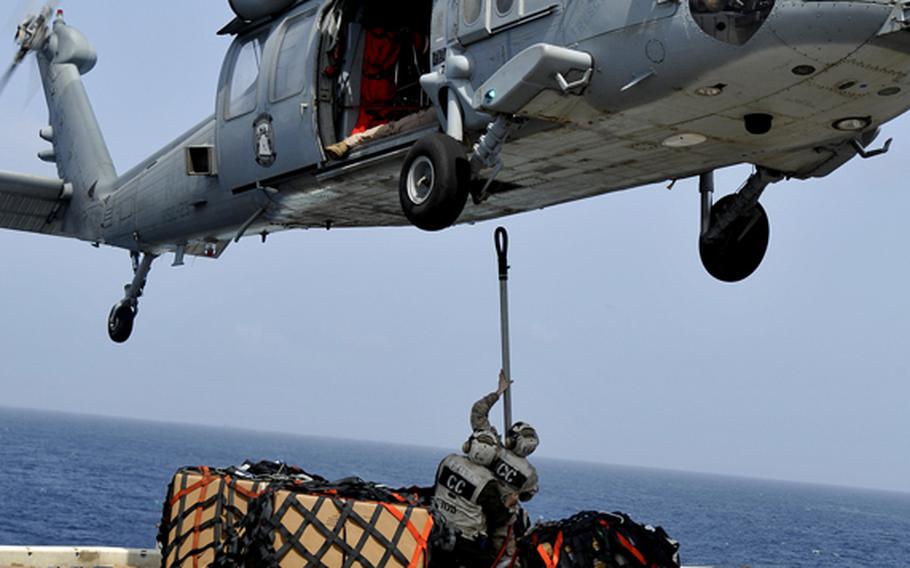 Marines assigned to the 15th Marine Expeditionary Unit hook up a cargo net to an MH-60S Sea Hawk helicopter aboard the USS Peleliu during a vertical replenishment on Aug. 14. The Peleliu Amphibious Ready Group is supporting the Pakistani government and military disaster relief efforts in flooded regions of Pakistan. (Omar A. Dominquez/U.S. Navy)

Marines assigned to the 15th Marine Expeditionary Unit hook up a cargo net to an MH-60S Sea Hawk helicopter aboard the USS Peleliu during a vertical replenishment on Aug. 14. The Peleliu Amphibious Ready Group is supporting the Pakistani government and military disaster relief efforts in flooded regions of Pakistan. (Omar A. Dominquez/U.S. Navy) 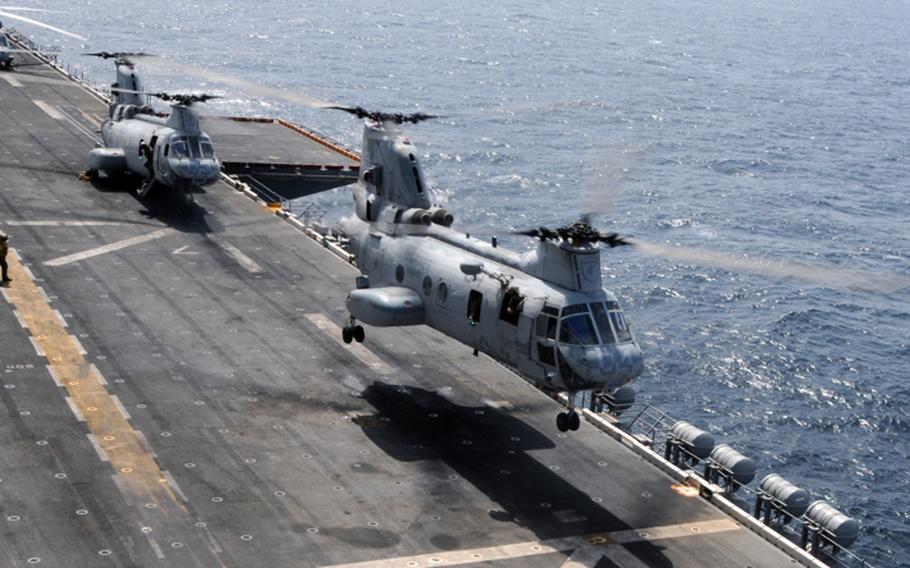 U.S. troops continue to rush supplies and help evacuate some of the estimated 20 million flood victims in Pakistan, but much remains to be done, according to a top military official coordinating the effort.

For nearly three weeks, the U.S. military has been aiding stricken residents of the Swat Valley, a former insurgent battleground where everything has been washed away, according to Brig. Gen. Mike Nagata, deputy commander of the Office of the Defense Representative, Pakistan.

Most bridges in the long river valley have been lost and very large sections of roads and buildings destroyed, he said.

But while the U.S. effort has so far rescued more than 4,000 stranded people, Nagata said there is much more to be done. The U.S. has pledged more than $150 million in aid, with U.N. officials estimating that $460 million in donations will be required.

&ldquo;The scale of the disaster is so large that it&rsquo;s going to take some time to get to everyone,&rdquo; he said in a telephone interview Thursday.

The U.S. military effort in Swat is being coordinated out of Ghazi Air Base, a Pakistani installation in the country&rsquo;s Northwest Frontier province that has seen its American personnel double to about 200 since the flooding began July 29, Nagata said.

In recent days, the 15th Marine Expeditionary Unit has arrived in the waters off the Pakistani coast, and Ghazi now has 15 Marine and Navy helicopters on hand, he said, replacing the Army Chinooks and Black Hawks that arrived from Afghanistan right after the floods.

The U.S. military presence in Pakistan is expected to grow with the arrival in late September of the Kearsarge Amphibious Ready Group and the 26th Marine Expeditionary Unit. According to a Defense Department statement, the Navy and Marine Corps teams will bring significant medium and heavy-lift aircraft and other assets to support the flood relief efforts.

The Pakistani government has not asked that U.S. troops provide security as part of relief operations, Whitman said.

The Swat Valley has been the site of fierce fighting in recent years between the Pakistani army and the Pakistani Taliban. Pakistani officials have expressed concerns that insurgents could seek to use the natural disaster to their advantage.

Nagata said Thursday that the security of U.S. personnel aiding the flood relief hasn&rsquo;t been an issue.

&ldquo;We have seen absolutely no sign of a threat in the three weeks that we have been operating,&rdquo; he said.

Nagata stressed Thursday that U.S. personnel are in country at the request of the Pakistani government, and that beyond evacuation and supplies, the military hasn&rsquo;t been asked to do anything else. He referred questions about whether the U.S. would send medical personnel or engineers to the country to the U.S. Embassy in Islamabad. Press officials there did not return calls for comment by Stars and Stripes&rsquo; deadline Friday.

It remains unclear whether the U.S. efforts will change Pakistani perceptions of America. According to a recent poll by the Pew Global Attitudes Project, only 17 percent of Pakistanis have a favorable view of the U.S., and nearly 60 percent describe the U.S. as an enemy.

Praising the cooperation and bonds he says are forming between the U.S. troops and their Pakistani counterparts, Nagata said that his only concern is helping those in need.

&ldquo;The way we see this mission is that we&rsquo;re here to help people in need, that is our exclusive focus,&rdquo; he said. &ldquo;If that has other beneficial consequences, great.&rdquo;