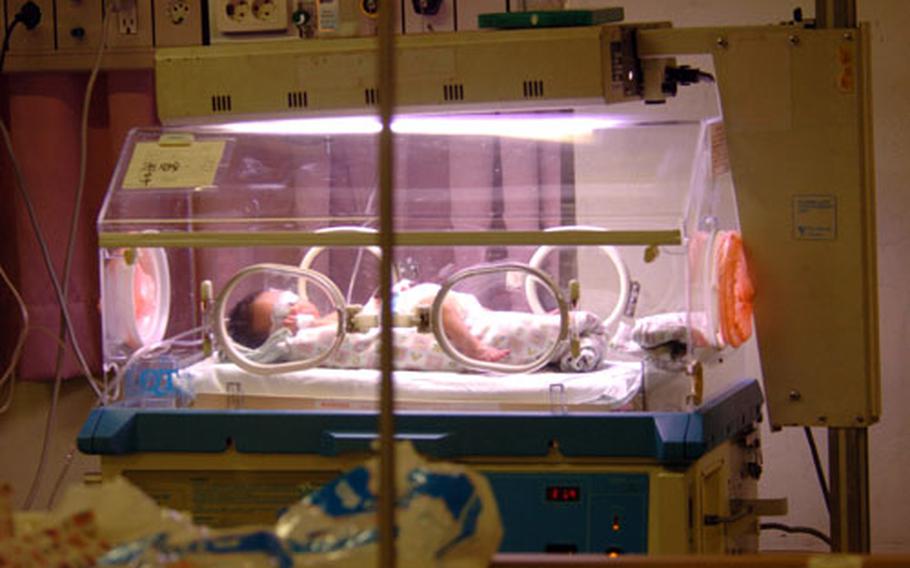 A baby is cared for in the neo-natal intensive care unit at the Keimyung University Dongsan Medical Center in Daegu, South Korea. About two women from the U.S. military community a month deliver their babies at the South Korean hospital. (Christopher B. Stoltz / S&S)

Hundreds of women from the U.S. military community in South Korea head to the 121st Combat Support Hospital in Seoul each year to give birth.

Roughly 400 of them give birth in the military hospital. But another 200 welcome their new bundles of joy in Korean hospitals.

Many Korean spouses simply choose to use a hospital where they feel at home culturally. But for some women, it&#8217;s a case of unfortunate timing.

Medical officials at the 121st say they can safely deal with two women having babies at any given time. If another woman walks in the door in labor, and can be transported to a local hospital, she&#8217;ll find herself in an ambulance headed out the gates.

Maj. Robert Fowers, clinical chief of obstetrics and gynecology at the base hospital, said there are many reasons a woman might be referred off base.

Need for specialized care &#8212; if she has a heart condition, if the fetus has identified problems or if the woman goes into labor prematurely, for example &#8212; means she&#8217;ll have to deliver off base.

&#8220;The staff we have determines what we can and can&#8217;t do,&#8221; he said. Last summer, with only two obstetricians on staff, more women than normal were referred off base.

Now that the hospital is fully staffed again with four doctors, all members of the community should start at the base hospital, officials said.

Fowers said women who use the off-base hospitals see some differences in care.

Epidurals aren&#8217;t necessarily automatically offered, the Caesarean section delivery rates are extremely high in South Korea, male doctors might be more comfortable talking to the fathers than the mothers and some staff members might speak only rudimentary English, Fowers said.

The agreements help those entering the off-base system by ensuring the hospitals have English-speaking doctors, use FDA-approved drugs and procedures and provide Western-style services, such as meals.

During the MOU negotiations, Wilhite said, a push is made to make sure cultural and linguistic differences are addressed.

The practice has saved the military millions of dollars since 1999, officials have said, because patients could receive local care instead of being sent to military facilities in other countries or back in the United States.

The MOUs also help patients get quicker medical care, officials have said. Korean people might wait months for an appointment with a specialist while military members and their families usually can be seen within a week.