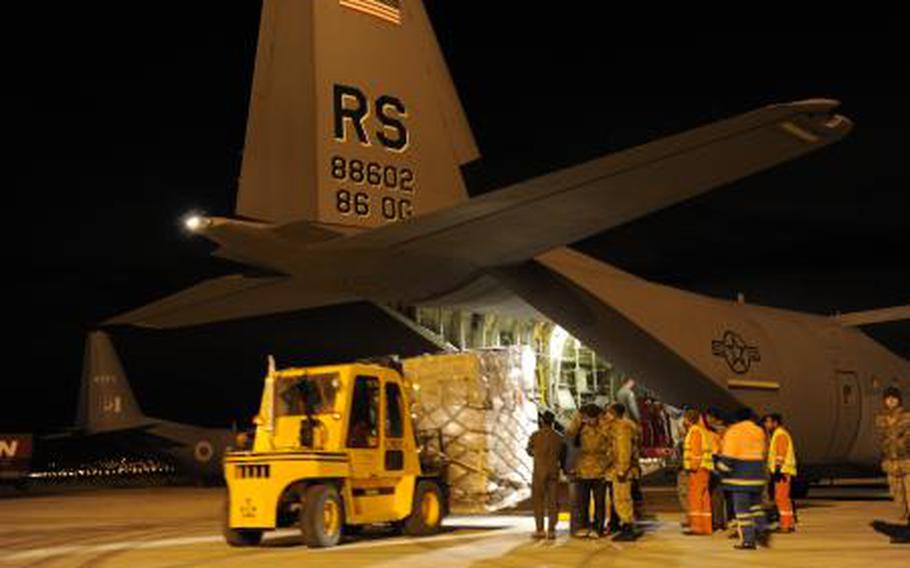 A forklift offloads supplies from a C-130J Super Hercules assigned to the 37th Airlift Squadron, Oct. 29, at Erzurum Airport, Turkey. The C-130J was taking blankets and cots flown as humanitarian aid for the victims of a 7.2-magnitude earthquake that occurred in north-eastern Turkey recently. (COURTESY OF THE U.S. AIR FORCE)

NAPLES, Italy &mdash; The U.S. military in Europe has been ferrying supplies to Turkey in recent days in response to the Turkish government&rsquo;s request for aid following a 7.2-magnitude earthquake in the eastern part of the country on Oct. 23.

U.S. European Command has directed a variety of relief missions since Saturday intended to help deal with the aftermath of the disaster, which has reportedly left close to 600 dead and more than 4,000 injured.

EUCOM&rsquo;s part of the mission wrapped up Monday, but U.S. relief assistance continues via the State Department and the U.S. Embassy in Turkey, according to Army Capt. Jack Gaines, a EUCOM spokesman.