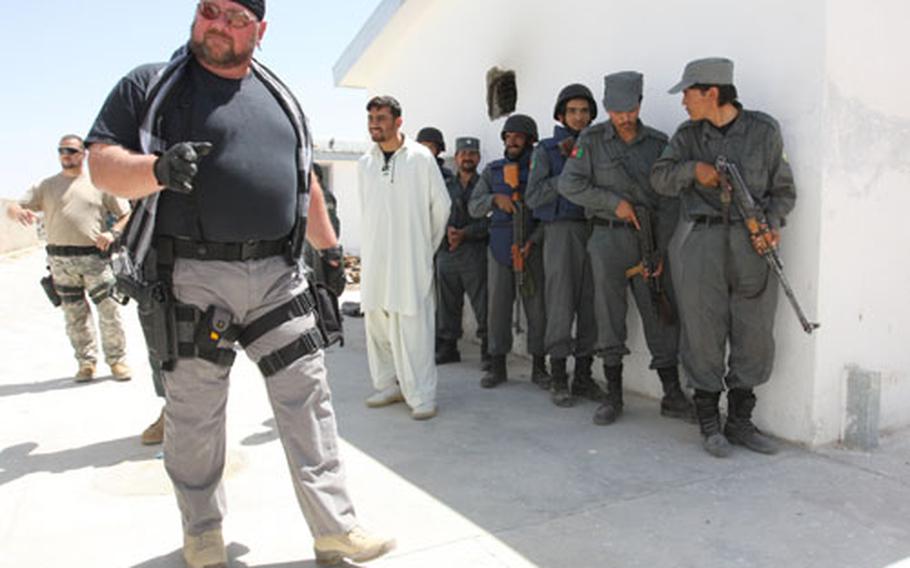 QALAT, Afghanistan &#8212; A group of Afghan police officers gathers outside a low-slung mud-brick building in the abandoned village of Mirza Gul Muhammad, a few miles south of the provincial capital of Zabul province, in southern Afghanistan.

Four American soldiers, members of a police mentor team known as "Swamp Fox," are stacked in a tight group against the wall of the empty structure. One of them is preparing to throw a hand grenade inside.

Jerry Nichols, a civilian police adviser from the U.S. security firm DynCorp, is lecturing the assembled Afghans, as the American breach team goes through its drill.

"The only time you use a grenade when clearing a house is when you know that [the Taliban] is in there with a weapon ready to shoot," says Nichols in a loud voice.

Sgt. 1st Class Mark Hammer, the platoon sergeant for Swamp Fox, kicks in the door and hurls in the grenade. It explodes, and as the smoke billows out, Hammer and the four soldiers behind him rush in the building, shouting.

The soldiers come out and announce that the room is clear. They go from one room to the other, until the building has been checked. After the demonstration, Rich Garner, another DynCorp adviser from Granby, Colo., pulls the Afghans together in a group and begins instructing them on the fundamentals of the task.

The Afghans go through the close-quarter battle drill themselves under Garner&#8217;s close and persistent supervision. They may not be the Los Angeles SWAT team, but one day they&#8217;ll be good enough, according to their U.S. mentors.

"This is fairly complicated stuff for them, the advanced course," says Capt. Jack Nothstine, 29, of Richmond, Va., assistant team chief for Swamp Fox. "But if you&#8217;ve ever seen Americans doing (this kind of) training for the first time, it&#8217;s not much different. There&#8217;s a lot of fumbling around."

For months after they were assigned to mentor the Qalat police, the soldiers with Swamp Fox practiced what had become the basic modus operandi in the fight against the Taliban in southern Afghanistan. They would receive intelligence that a Taliban leader was hiding in a particular village, and then, along with the Afghan police, they&#8217;d go in, cordon off the village and search it. But these operations produced essentially nothing.

Then a few weeks ago, they finally scored. After a tip, the soldiers and Afghan police were able to go in and snag a wanted Taliban figure from the village in which he was hiding.

"We&#8217;re trying to dismantle the Taliban support network," says Maj. John Payne, 40, of Brooklyn, N.Y., the Swamp Fox team chief. "If we can go in, in the middle of the night, and grab guys and be gone before anyone is awake, it&#8217;s going to be a lot more devastating to the Taliban."

With the Taliban insurgency on the rise across southern and eastern Afghanistan in recent years, local police are on the front line of battle.

The Qalat district police were the first to go through a revamped police training course earlier this year under the supervision of U.S.-led forces in southern Afghanistan. The eight-week program is designed to train local officers in a host of small unit tactics and paramilitary skills.

Military and civilian trainers also emphasize basic leadership principles, human rights and professional ethics. It&#8217;s a tall order for a force that developed under Soviet guidance and was plagued by a legacy of corruption that became institutionalized during Afghanistan&#8217;s nearly three decades of war. But Payne and other soldiers say they&#8217;re making progress.

Gilani Khan, the Qalat district chief, has gone on local radio, admitting publicly that police have made plenty of mistakes in the past, but the force on the streets now is not the same one as before. The new message is that the police are meant to serve the people of Afghanistan, not enrich themselves. At least five officers have been fired and arrested by Afghan authorities for corruption.

"I think that sends a strong message that the old ways will not be tolerated," he says, cautioning that corruption will never be rooted out completely. The goal, instead, is what he and other U.S. military officers call "functional corruption."

Other problems also plague the Afghans. Their logistics and personnel systems are in shambles. Many of their noncommissioned officers lack initiative or don&#8217;t know how to lead. They are also grossly underpaid, receiving the equivalent of just $100 a month, while soldiers with the Afghan army make about $125 a month. Meanwhile, the rumor around Qalat is that the Taliban will pay $500 a month to any member of the security force that provides them with information.

Security is such an issue that the Americans will share information with only a trusted handful of their Afghan counterparts before they go out on an operation.

"Most of them don&#8217;t know where they are going until we get there," Payne says.

Still, when put to the test, the Afghans have proved they will stand and fight. In early June, a group of Taliban fighters ambushed a Swamp Fox patrol one evening south of Qalat, just before darkness fell. The Qalat police, who were further down the road, came back, dismounted their vehicles and joined the battle, which raged for about 45 minutes.

The Afghans did so without the benefit of body armor or armored vehicles, according to Payne and others. Around 11 Taliban fighters were reported to have died in the engagement. No Afghan police or U.S. soldiers were killed. The battle shut down Taliban operations south of Qalat for weeks.

Qalat is one of three districts in Zabul province that have U.S. forces assigned to mentor them, and plans are in place to add a fourth team to the province. But many teams are understaffed already. There are currently about 2,800 U.S. police trainers in southern Afghanistan. Senior officers say the region needs at least twice that number.

Meanwhile, it&#8217;s a race against time, with the local people caught in the middle between the government forces and the Taliban.

"The vast majority of the people here don&#8217;t care whether it&#8217;s the government or the Taliban," said Nothstine. "They just want to grow their crops and raise their families, and they&#8217;re going to support whoever can give that to them first."