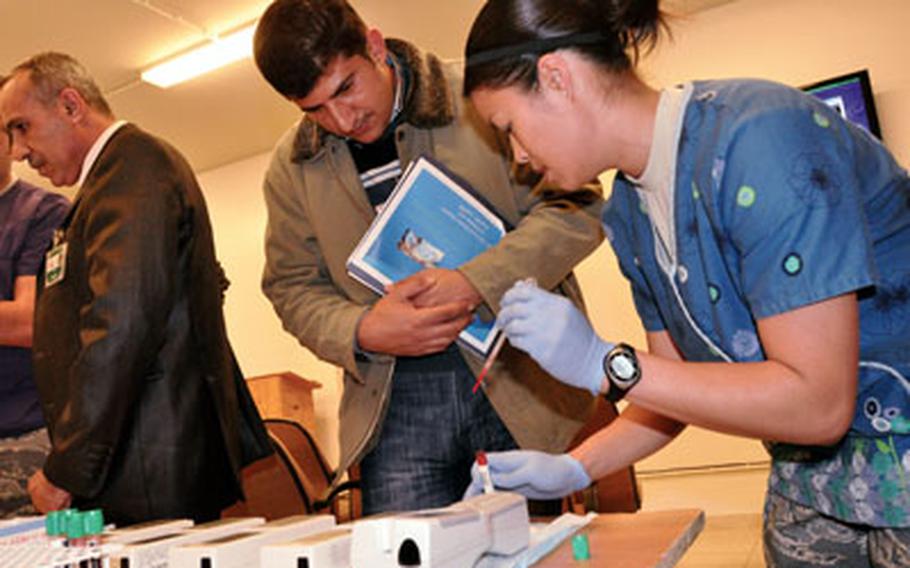 Buy Photo
A nurse at the Air Force Theater hospital shows Dr. Salah Mahdi Ahmed, a general practitioner at a clinic in Yethrib, how to use the I-STAT monitor. The portable device analyzes blood and then gives lab results within a few minutes. (Seth Robbins/Stars and Stripes)

Buy Photo
A nurse at the Air Force Theater hospital shows Dr. Salah Mahdi Ahmed, a general practitioner at a clinic in Yethrib, how to use the I-STAT monitor. The portable device analyzes blood and then gives lab results within a few minutes. (Seth Robbins/Stars and Stripes) 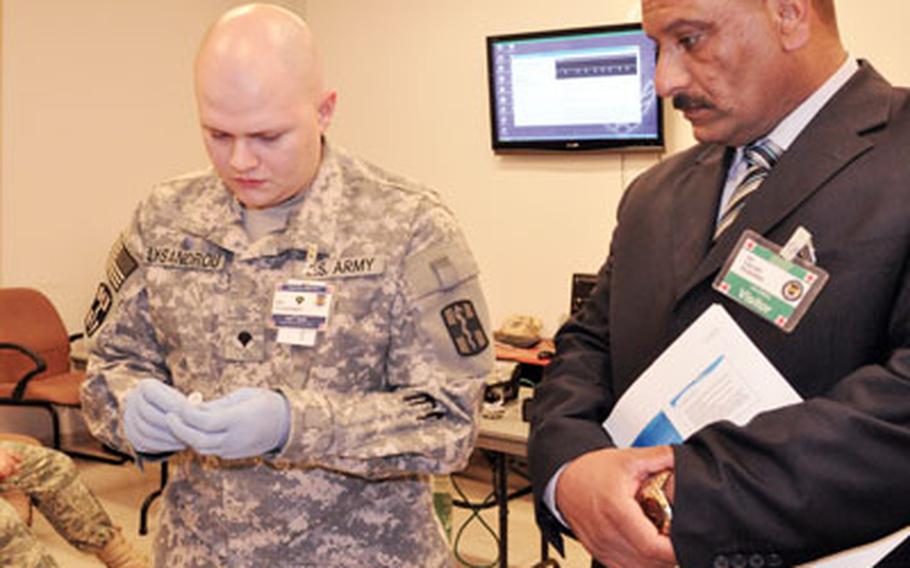 Spc. James Lysandrou, of the 932nd Blood Support Detachment, shows a rapid test for HIV and Hepatitis B and C to Faez Farhan Muhammad, director of the Ibn Firnas clinic in Albu Hassan. Staff from Muhammad&#39;s clinic will soon learn with their American peers at a new medical training facility just outside the gates of Balad. ()

JOINT BASE BALAD, Iraq &#8212; Dr. Salah Mahdi Ahmed, a general practitioner at a clinic in the remote village of Yethrib, would never have come for training at the Air Force Theater Hospital a few years ago.

It was the height of sectarian violence in Iraq, and doctors were being snatched and held for ransom. Some were slain in their own clinics, simply for treating the wrong patient.

Now he eyed an I-STAT monitor, a portable device that analyzes blood and then gives lab results within a few minutes. He shook his head incredulously at the many tests performed simultaneously by the $6,000 machine, such as measurements of sodium, potassium and hematocrit, among others. Ahmed said he had not seen one patient with blood gas results at his clinic.

Iraq&#8217;s medical community was once first-rate and a regional leader until the early 1990s, when United Nations-imposed sanctions crippled the broader economy, and when President Saddam Hussein began forcing doctors, many of whom had trained in England or the United States, to pay hefty fees to travel abroad. Doctors were unable to attend conferences to further their training. The quality of their equipment deteriorated as well. Many of the machines at the Ibn Firnas clinic in nearby Albu Hassan date from the 1970s.

Then after the U.S. invasion and the ensuing violence, many doctors fled as they were targeted in killings. In 2008, Iraq&#8217;s health minister Salih Hasnawi told Newsweek magazine that roughly half the country&#8217;s doctors left the country in the aftermath of the war, from an estimated prewar total of 30,000. Only about 800 have returned, he said. Those who stayed were overwhelmed with simply keeping people alive amid the bombings and bloodlettings.

But now that violence has abated, Iraqi doctors can get back to treating the sick and wounded. Many are training, once again, in England, India and the United States, and the Air Force Theater Hospital has become an impromptu teaching hospital, providing courses on everything from bandaging burn wounds to the latest techniques in surgical care.

At the recent seminar, a table was covered with tests for HIV, strep, hepatitis and influenza, all of which could be used at the nearby clinics. The table had about $9,000 worth of laboratory kits on it, said Capt. Tracy Harrelson, a laboratory officer with about 19 years of experience.

After visiting the Ibn Firnas clinic, Col. Mark Koeniger&#8217;s first impulse was to give the staff supplies, such as a simple sharps container, a bin for storing used needles. But he realized that the container would not alleviate the larger problem of disposing of medical waste, which was being thrown in a bin out back and burned.

&#8220;Now they need a medical incinerator, said Koeniger, commander of the hospital and part of the 332nd Expeditionary Medical Group. &#8220;One problem can get complicated very fast.&#8221;

For that reason, Koeniger has asked his staff to focus on retraining the rural doctors and nurses to provide care as a team, and to make the basic work of running a clinic easier. The classes involve refreshers on medical procedures, as well as tutorials on how to store medicine, how to track patient records, even how to paint the walls in a semi-gloss, making it easier to disinfect them and wipe away the ubiquitous dust.

Lt. Col. Brenda Nelson has been mentoring nurses to be more hands-on, including getting vitals such as temperature and blood pressure and writing down chart information. Doctors here normally handle those tasks.

At the rural clinics, men and women are still treated in separate wards, and women cannot touch male patients. Female nurses mostly care for other women, Nelson said. A few even have birthing rooms within their homes.

Soon a medical training facility will open just outside Balad&#8217;s gates, where Iraqi doctors and nurses will bring their patients and learn from their American peers. The training facility &#8212; a small wooden house that has four exam rooms, including a waiting area with benches &#8212; will be the first of its kind in Iraq, said Koeniger.