U.S.-led task force helps the Iraqi court system get back to work 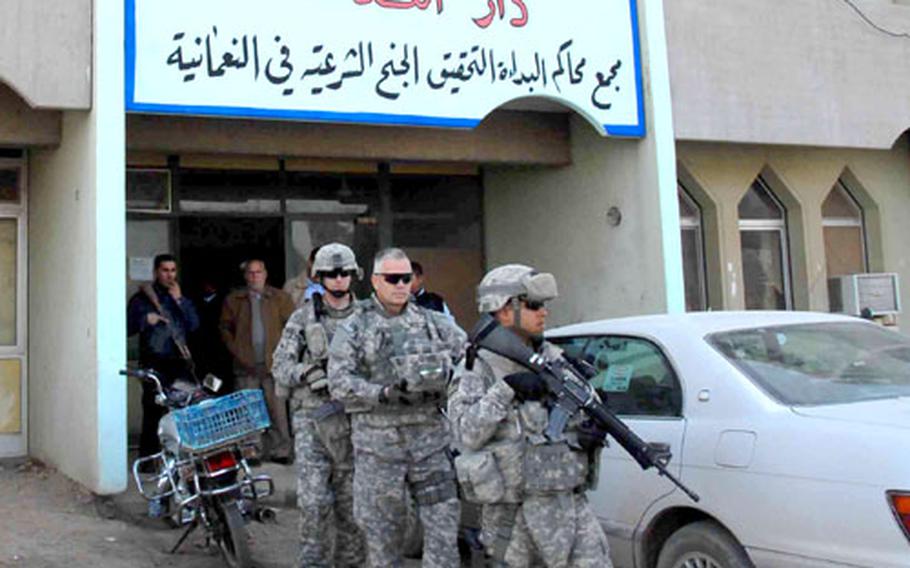 U.S. troops leave the Numaniyah courthouse in rural Wasit province after interviewing two judges. In the center is Art Oates, a contractor providing advice on law enforcement issues. The U.S. has started a task force in Wasit to evaluate courthouse security, teach Iraqi police investigators to get the information judges need to issue arrest warrants, and catalogue detainees being held in Iraqi jails. (Ashley Rowland / S&S)

U.S. troops leave the Numaniyah courthouse in rural Wasit province after interviewing two judges. In the center is Art Oates, a contractor providing advice on law enforcement issues. The U.S. has started a task force in Wasit to evaluate courthouse security, teach Iraqi police investigators to get the information judges need to issue arrest warrants, and catalogue detainees being held in Iraqi jails. (Ashley Rowland / S&S) A near-empty glass of chai sits on a judge&#39;s desk in Numaniyah as he is interviewed by members of a U.S. task force trying to make sure Iraq&#39;s legal system works. Security at courthouses is a major concern, and many judges have received death threats because of their jobs. (Ashley Rowland / S&S) 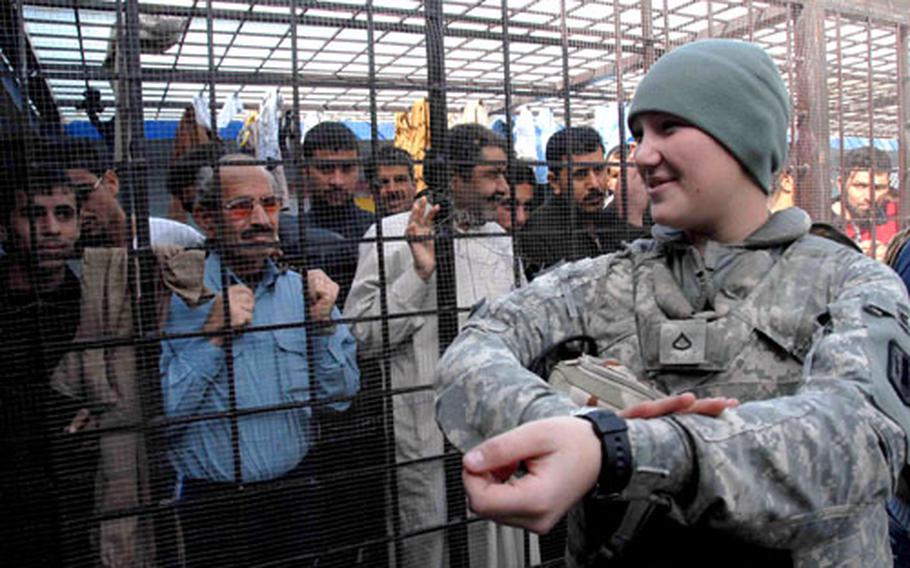 Pfc. Serena Wagner shows prisoners at the Numaniyah jail how to rub in cream for rashes, common among the men there. Members of a U.S. task force at Forward Operating Base Delta brought the cream and other medicines to the prisoners after learning their Iraqi doctors didn&#39;t have enough for them. The U.S. task force is interviewing all 600 prisoners in Wasit province to see if they&#39;re being treated properly and getting adequate legal counsel. (Ashley Rowland / S&S)

NUMANIYAH, Iraq &#8212; Shortly after the electricity flickered off inside the crumbling courthouse, the judge sat in his office and warily answered some questions. The only light came from a window behind him.

What&#8217;s your relationship with the police like? Very good, he said. Do the police investigators follow through on their orders? Yes.

Do the police have the investigative skills that judges need? Here, the judge paused.

"I think for the forensic cases, they need a lot of help," he said through an interpreter. "Especially the DNA cases."

Until recently, using DNA as evidence in Iraqi court was unheard of. So was the idea of Iraqi judges and police investigators cooperating on a case, since the two groups were often at odds under former dictator Saddam Hussein&#8217;s regime.

As Iraq slowly rebuilds itself after years of war and insurgency, those police and judges are critical to making sure the country survives, said Capt. Patrick Gilman, command judge advocate at Forward Operating Base Delta in Kut.

In the past year, the task force &#8212; the first of its kind in Iraq &#8212; has interviewed judges about security and the physical conditions of their courthouse. They&#8217;ve taught Iraqi police to use a biometric identification system to catalogue their prisoners, so they can identify inmates who land in jail again. In October, they promoted an outdoor play to educate Iraqis about voting and their legal rights under the new Iraqi constitution. About 15,000 Wasit residents attended the three-night event.

Their goal: Make sure Iraqis are confident that their police are fair and their court system works.

"When the police are nothing more than state thugs, they&#8217;re no better than the prison thugs they&#8217;re trying to put away," Gilman said. "When that happens, there&#8217;s no trust in the judicial system, in that it will protect you. The whole system collapses."

Since February 2008, the task force, which also includes civilians, has interviewed about 25 judges across the province about their courthouses and caseloads.

They&#8217;ve found that working conditions, especially outside the capital city of Kut, are often poor. For instance, in the courthouse in Numaniyah, which will be used for at least seven months until a new one is built, two of the four computers used to print out prisoners&#8217; sentences are broken. They get about two to three hours of electricity per day, and judges conduct trials in their offices because there were no usable courtrooms.

"Once you have courtrooms, the media can come. The citizens can come. But you have a scrunched-up office and nobody can come," said Wayne Rich, a retired federal prosecutor and retired U.S. Marine colonel.

They also ask the judges &#8212; many of whom have received death threats as the number of militia members being convicted increases &#8212; about security at the courthouses. How many guards are there, and do they have enough ammunition? Does the judge have a security detail, and does he carry a weapon? Many courthouses don&#8217;t have 24-hour security, and judges often carry personal weapons in addition to having a security detail.

"Why would they issue an arrest warrant if they&#8217;re going to get killed?" Rich said.

The task force is also trying to improve the relationship between judges, who were often persecuted under Saddam Hussein&#8217;s regime, and the Iraqi police investigators.

In the past, police were known to arrest someone without warrants, evidence or a judge&#8217;s permission &#8212; simply because someone had a grudge against them, or they happened to be in the wrong place at the wrong time.

Evidence consisted of accusations and confessions, virtually nothing tangible from a crime scene, like fingerprints or DNA samples.

"There were no smoking guns," Gilman said.

Now, judges are accepting hard evidence in court more often, he said. Witnesses, who used to fear retribution if they testified, are more likely to come forward with information about crimes because they believe police will keep them safe.

Police investigators are learning how to interview witnesses and follow proper procedures when collecting evidence. Four Iraqi judges recently began a three-week course to teach the police investigators how to collect evidence &#8212; "basically, what a judge needs to authorize an arrest warrant," Rich said. All 90 police investigators in the province will eventually take the class.

The task force is also interviewing each of the approximately 600 prisoners in the province. They ask if prisoners are being treated well, and about the progress of their cases: Did they get to see an attorney? How long did they have to wait before their trial?

The prisoners are generally well-cared for, members of the task force said. But throughout the province, prisoners awaiting trial are kept in the same cells with people who have been convicted of crimes &#8212; often putting older, hardened criminals in contact with younger people accused of minor crimes.

"You have guys who have received the death penalty stuck in there with people who have stolen cars," Oates said.

A major problem at Wasit&#8217;s courthouses and jails is a lack of money.

On a recent visit to the Numaniyah jail, the Americans delivered a sack of basic medicines for the inmates that the jail couldn&#8217;t afford &#8212; lice removal shampoo, hydrocortisone cream, eye drops and pain relievers. Even one of the jailers begged the Americans to give him some eye drops for himself.

Even a little bit of money would have gone a long way at the Numaniyah courthouse, where the lights suddenly turned on as the Americans were finishing their interview with the judge.

Before they left, they asked the judge if there was anything they could do to help him.

"It would be great if you could get us a generator," he said.