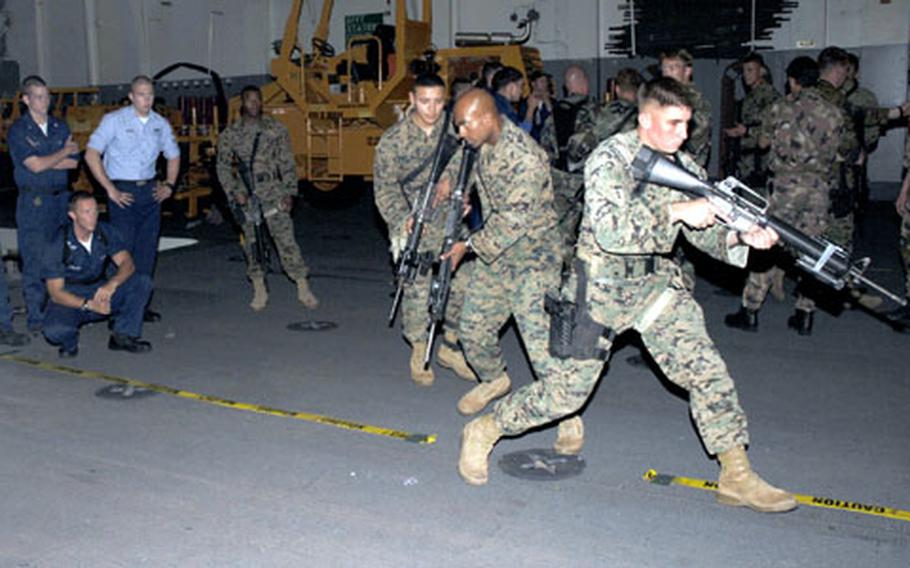 &#8220;One reason we&#8217;re doing these exercises is to help [the nations] improve their proficiency and get these regional countries working closer together in maritime-related activities so they can share information and share capabilities,&#8221; Looney said in a telephone interview from the lead ship, the USS Nashville.

As the U.S. military continues to shift its concentration in the fight against terrorism to Africa, the Barbary Thunder exercises &#8212; which started June 23 and run through Thursday &#8212; are focused on improving cooperation and at-sea skills of troops from Morocco, Algeria and Tunisia, with a complement of liaison officers from France, Italy and Spain, Looney said.

A Moroccan and an Italian helicopter joined two U.S. Navy helicopters aboard the Nashville and crews worked to learn each other&#8217;s tactics and techniques, said Looney, also the commodore of Amphibious Squadron 2.

Crews also &#8220;worked together on maritime and navy skills such as ship handling, maritime interdiction, refueling and things of that nature,&#8221; Looney said.

One of the most important lessons, however, is the opening of dialogues between NATO participants and the North African nations, said Italian Lt. j.g. Francesco Rima, assistant operations onboard the Italian frigate Granetiere.

&#8220;We need to know how the other countries work to achieve good integration in the future,&#8221; he said.

Some U.S. officials were pleased with the commitment for cooperation voiced by the African representatives, said Lt. Cmdr. Richard Guzman, CTF-64 staff planner and liaison officer between the participating nations.

For example, during one scenario a U.S. aircraft tracked a suspicious vessel, faked running out of fuel and had to abort the chase. Algerian officials were ready to take up the hunt, he said.

Not all the lessons were so militaristic in nature. U.S. cooks from the Nashville, for example, taught cooks aboard Italian vessels how to prepare meals en masse, while an Italian cook returned the favor by divulging secrets to pizza-making while afloat, Looney said.