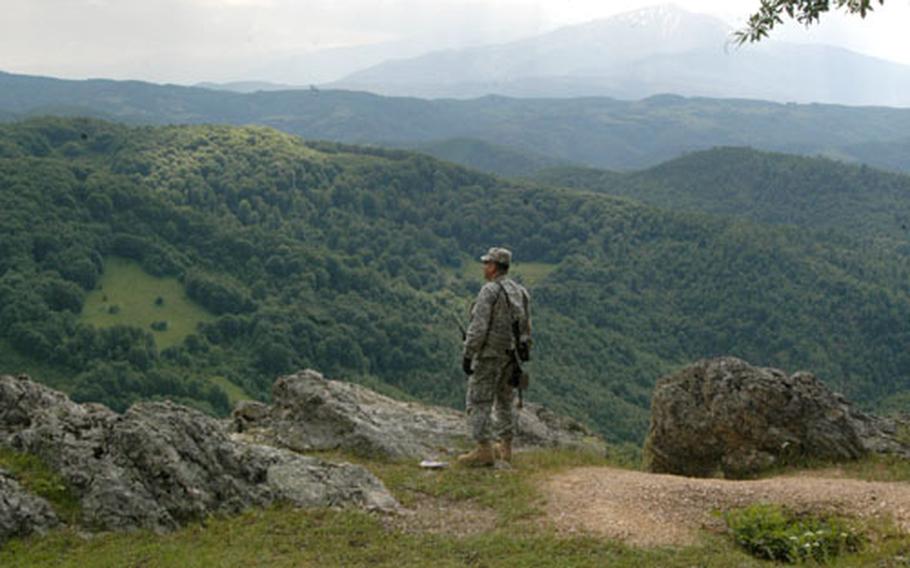 Staff Sgt. Luis Rivera looks toward the border of Macedonia from a viewpoint in the mountains of Kosovo during a recent patrol. Rivera and his troops meet routinely with Kosovo Border Police and their counterparts across the border to monitor events between the two countries. (Kent Harris / S&S)

Staff Sgt. Luis Rivera looks toward the border of Macedonia from a viewpoint in the mountains of Kosovo during a recent patrol. Rivera and his troops meet routinely with Kosovo Border Police and their counterparts across the border to monitor events between the two countries. (Kent Harris / S&S) 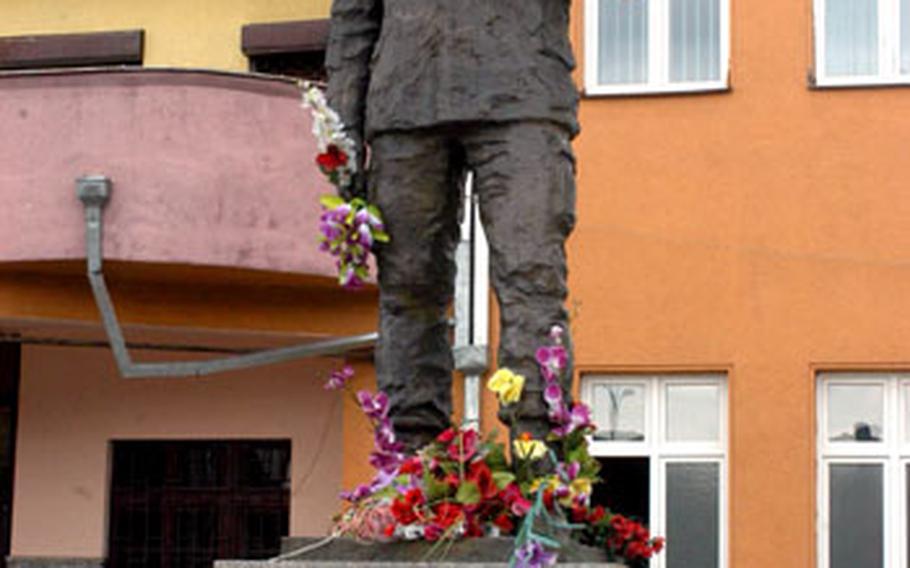 This statue of Agim Ramadani stands in a prominent position in downtown Gnjilane. Ramadani was an ethnic Albanian who was a member of the Serbian army before fighting broke out in Kosovo. He left the army and was later killed fighting for rebel forces. Such statues and memorials honoring those killed a decade ago are located all over Kosovo. (Kent Harris / S&S) 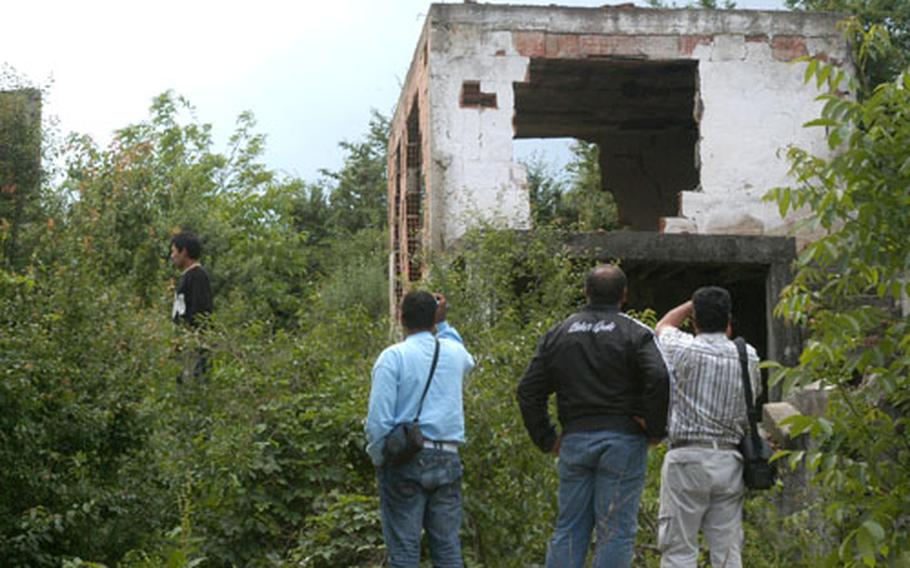 Ethnic Roma refugees who used to live in the village of Perlepnica on the outskirts of Gnjilane, Kosovo, survey one of the ruined homes they hope to return to. Ten years after NATO forces entered Kosovo, ethnic divides are still clearly evident. (Kent Harris / S&S) 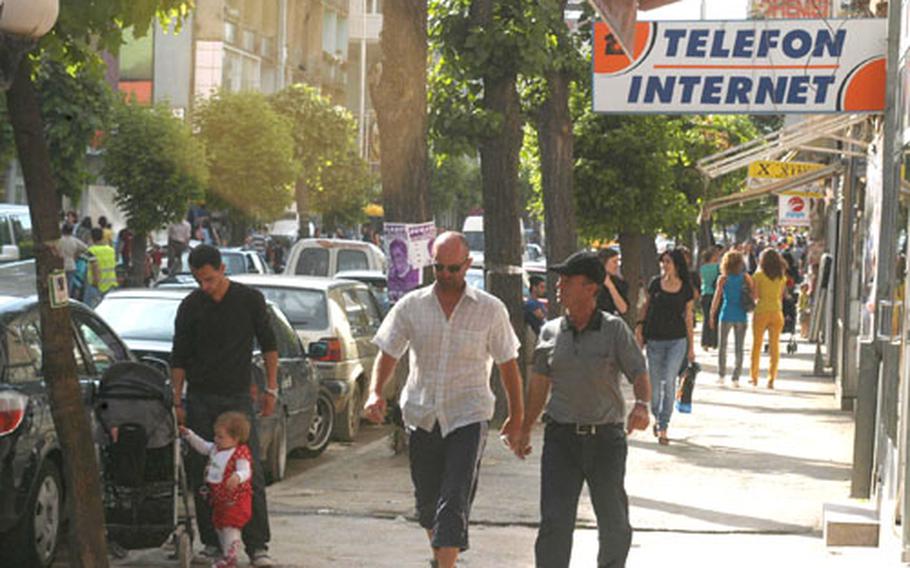 Squint a bit and the city of Ferizaj, the closest large population center to Camp Bondsteel in Kosovo, resembles other European cities. Local residents have cleaned up their cities considerably from the days that U.S. troops first entered the country. Small businesses are everywhere, but a large percentage of the population is unemployed. (Kent Harris / S&S) 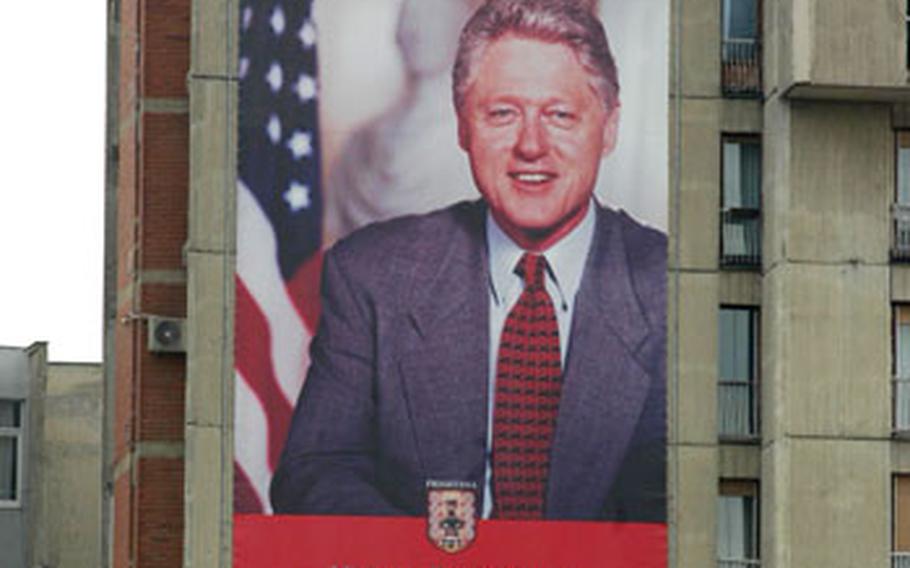 U.S. troops — and political leaders such as former President Bill Clinton — are popular in Kosovo, a country where U.S. troops have been serving a decade. This billboard of Clinton is posted above the street bearing his name in the capital of Pristina. (Kent Harris / S&S)

About a dozen years ago, not many Americans had heard of a place called Kosovo.

The small province in southern Serbia &#8212; bordered by the former Yugoslav Republic of Macedonia to the south and Montenegro to the east &#8212; didn&#8217;t make headlines very often. At least until 1998, when tensions flared into open hostility between the predominantly ethnic Albanian population and Serbian forces directed from Belgrade.

Amnesty International estimates that 9,000 civilians, most of them ethnic Albanians, were killed as Serbian forces took on the paramilitary Kosovo Liberation Army, or KLA. Hundreds of thousands of refugees fled their homes and the province as fighting intensified.

Ten years ago this weekend, NATO troops entered Kosovo after Serbia agreed to withdraw its forces following a 78-day allied bombing campaign. At the mission&#8217;s peak, some 50,000 NATO troops, including 7,000 Americans, kept the peace in Kosovo. By 2003, the number fell to 17,500, including 3,000 Americans.

On Thursday, NATO defense ministers decided to further downsize troop levels in Kosovo, from 15,000 to 10,000.

Today, about 1,400 Americans provide peace and security in southeastern Kosovo from Camp Bondsteel, a sprawling base built on a series of hills shortly after U.S. troops entered the area.

Not much has changed at Bondsteel since the early years following the buildup. Troops live in rows of SEAhuts, shop at the post exchange and eat at the two dining facilities.

Outside the wire, some changes are evident. The roads are better, featuring fewer of the large potholes that some joked were caused by NATO bombing. The cities are cleaner, but piles of garbage still dot the countryside. Fewer generators hum outside shops in those cities, though some rural villages still lack power about half the time. Car washes and counterfeit CD shops &#8212; once frequented by U.S. troops &#8212; have largely been replaced by restaurants and gas stations.

Change is harder to see on other fronts.

The two main population groups &#8212; ethnic Albanians and ethnic Serbs &#8212; are still largely divided into separate communities. Tensions remain, even if open hostility does not.

In a March report, Amnesty International said more than 1,900 people remain unaccounted for &#8212; some ethnic Albanians taken by Serbian forces and others ethnic Serbs believed to have been captured by the KLA.

There appears to be far more trust in U.S. and KFOR troops than in local governments.

"The Kosovo population is still not fully integrated into the institutions and government," said Qemaji Mustafa, the mayor of Gnjilane, the largest city in Multinational Task Force (East). "Especially, the problems with the Serbian population."

Mustafa is referring to how a majority of the Serbian population continues to boycott elections and ignore local governments, and more so after the country declared its independence from Serbia last year,

"The Serbs in Kosovo, Serbian government in Belgrade, Serbs around the world will never accept the new reality," said Nesa Vesic, an ethnic Serb who has a radio show in the Serbian town of Klokot, a short drive from Bondsteel.

Many municipalities today have deputy mayors who are ethnic Serbs. Serbs are generally allowed to travel and conduct business freely. KFOR patrols don&#8217;t have to escort them anymore. That frees up U.S. troops to focus on two interlocking efforts in their sector.

Capt. Eddie Morgan, a National Guardsman from Eureka, Calif., is part of a Liaison Monitoring Team. He and a partner travel around Gnjilane in a civilian vehicle. They wear military uniforms, but not extra protective gear. They carry concealed weapons. Essentially, they&#8217;re trying to be seen as nonthreatening.

It&#8217;s not uncommon for local citizens to ask them to resolve issues. Last week, Morgan was helping solve a dispute about a large tree that appeared ready to fall over on the Serbian church in Gnjilane or the adjacent clinic. Though U.S. troops could easily handle the job themselves, they want the local residents to do it.

Neither are Morgan&#8217;s counterparts, technically. Morgan jokingly refers to Capt. Michael Riley, commander of Company A, 185th Combat Arms Battalion, as the &#8220;muscle.&#8221;

But Riley and his men generally project a more militaristic posture. They drive in Humvees, wear full-body protection and are heavily armed.

Not that they&#8217;re constantly engaged in battles with anti-American factions like they would be in places such as Iraq or Afghanistan. Still, they&#8217;re ready if called upon. When they see crimes committed, they&#8217;ll temporarily take people in custody and hand them over to the Kosovo police.

Lt. Col. Lars Staack, whose Task Force Sabre is responsible for patrolling the greater Vitina municipality, said both local law enforcement and government agencies have a ways to go to reach Western standards.

Soldiers from the 1st Squadron, 18th Cavalry Regiment patrol their sector every day, looking for trouble spots and working with Kosovo police and their Kosovo Border Police counterparts.