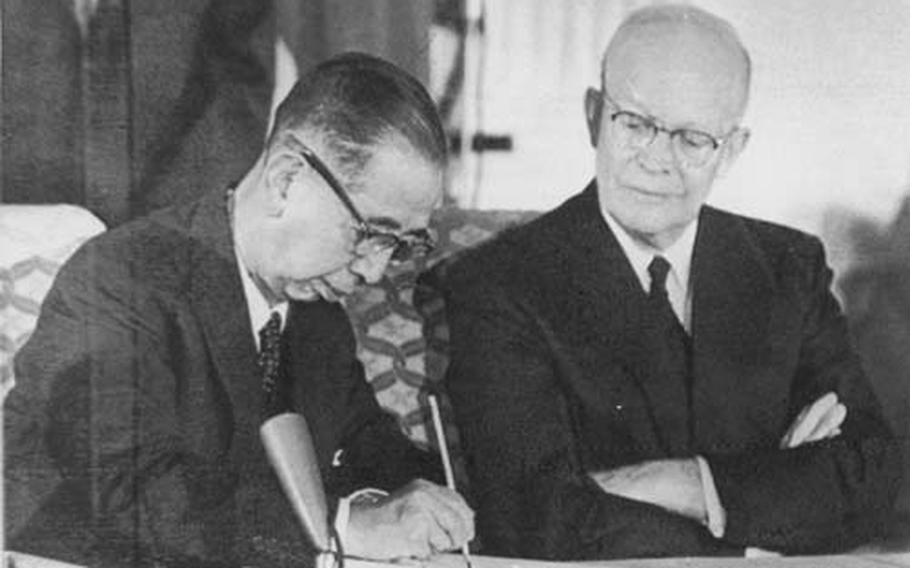 Jan. 19, 1960 Japan Prime Minister Nobusuke Kishi signs the U.S.-Japan military alliance pact on Jan. 19, 1960 with U.S. President Dwight D. Eisenhower looking on. The 50th anniversary of the signing is Tuesday, but the alliance has been strained in recent months over a controversy about basing U.S. Marine aviation units on Okinawa. treaty with President Eisenhpwer looking on. (File/AP)

CAMP FOSTER, Okinawa &#8212; Tuesday marks the 50th anniversary of the American treaty with Japan that allowed the U.S. military to keep a strategic foot in the door in the Western Pacific and provided Japan a powerful security umbrella.

But while simple ceremonies of the anniversary are scheduled for Tuesday at a handful of bases in Japan, they will be held amid a backdrop of controversy that has strained the alliance in recent months. At the center of the issue is the reluctance of Japan&#8217;s new government to accept a 2006 agreement to build a new Marine Corps air station in northeast Okinawa.

Japan&#8217;s new left-center ruling coalition, which in August swept from power the party that had led the country since the early days of the U.S.-Japan pact, says it needs to review the 2006 plan and perhaps move Marine air operations elsewhere.

The U.S., on the other hand, has steadfastly contended that Camp Schwab is the only viable relocation site for Marine Corps Air Station Futenma and is, indeed, the linchpin of the entire plan to realign U.S. troops throughout Japan and move some 8,000 Okinawa-based Marines and their families to Guam.

On Friday, the coalition again stood its ground, when Mikio Shimoji, a senior member of a subcommittee studying alternative sites, insisted after completing a tour of Japanese communities that moving Marine air units from Futenma, in urban Ginowan to Kadena Air Base, also on Okinawa, is still the best alternative to building a new facility.

"My trip to the possible relocation sites (for fighter jets and Marine helicopters) convinced me that our packaged relocation idea is the best and the most practical proposal," Shimoji said during a news conference Friday in Naha, Okinawa&#8217;s capital.

Shimoji advocates moving the bulk of Futenma operations to Kadena, while moving some Marine helicopter training to Japan Self-Defense Force bases in Nagasaki and Marine Corps Air Station Iwakuni on Japan&#8217;s main island of Honshu. He dismissed a concern recently expressed by Gen. Gary North, commander of Pacific Air Forces, that moving the Marines to Kadena was a bad idea because it simply would move noise and safety concerns from the Futenma area a few miles away to the sprawling Air Force base &#8212; also in an urban area.

Shimoji&#8217;s plan includes stepped up training on Ie Shima, an island near Okinawa, and the Higashi Fuji training ground. To reduce noise levels at Kadena, Shimoji suggests the U.S. move flight training for F-15s to Misawa and conduct training by visiting aircraft at Kansai Airport in Osaka.

Shimoji said the reactions from mayors of municipalities hosting the military bases and the international airport were overall very favorable.

"If the U.S. military can use Kansai Airport and conduct training in the region, I cannot imagine that it would be disadvantageous," he said.

Shimoji also pointed out that Japan enacted a contingency law in 2003 that gives the U.S. military access to every port, airport and road in the country during emergencies. His subcommittee is scheduled to forward its recommendations to Prime Minister Yukio Hatoyama at the end of the month.

Last week, in a meeting with Secretary of State Hillary Rodham Clinton, Japan Foreign Minister Katsuya Okada said the alliance must continue to be "sustainable for the next 30 or 50 years." But he hedged on the Futenma issue, promising only to "come up with a conclusion by May, so that there will be a minimum impact on the Japan-U.S. alliance."

Anniversary ceremonies marking the Jan. 19, 1960, signing of the alliance pact will be held at Sasebo and Yokosuka naval bases and Naval Air Facility Atsugi. Neither U.S. Forces Japan &#8212; whose mission revolves around maintaining and strengthening the alliance &#8212; nor bases on Okinawa have planned events Tuesday.

"This is a tremendous milestone, demonstrating the treaty&#8217;s lasting impact in the Asia-Pacific Theater," Lt. Gen. Edward Rice Jr., commander of U.S. Forces Japan and 5th Air Force, said in a statement released Saturday. "This treaty is indicative of our strong partnership with the Japan Self-Defense Forces and Japan officials we share every day."