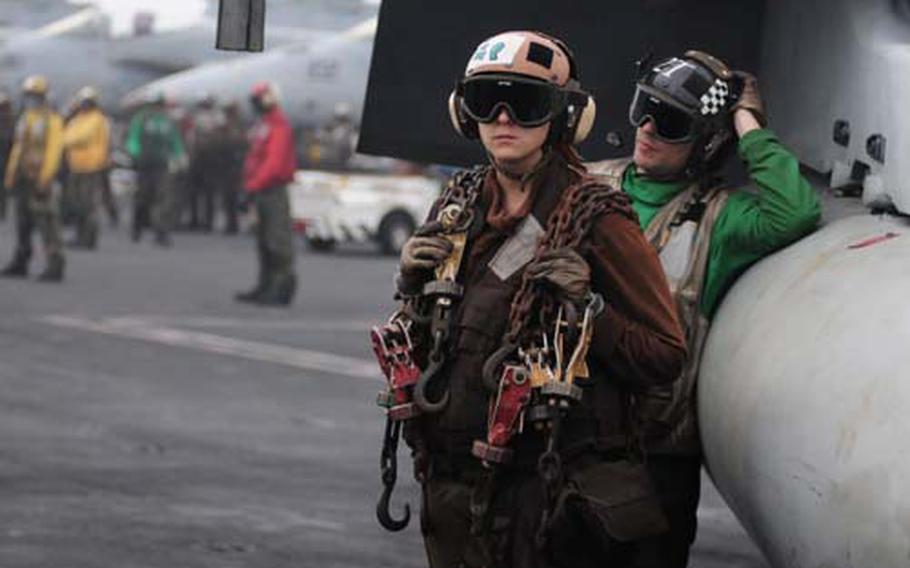 USS George Washington sailors stand by Friday to recover and secure their F/A-18 warplanes after the fighter-attack jets return from missions in support of this year&#39;s ANNUALEX, the maritime manuevers between the U.S. and Japan. (Matt Orr / S&S)

USS George Washington sailors stand by Friday to recover and secure their F/A-18 warplanes after the fighter-attack jets return from missions in support of this year&#39;s ANNUALEX, the maritime manuevers between the U.S. and Japan. (Matt Orr / S&S) 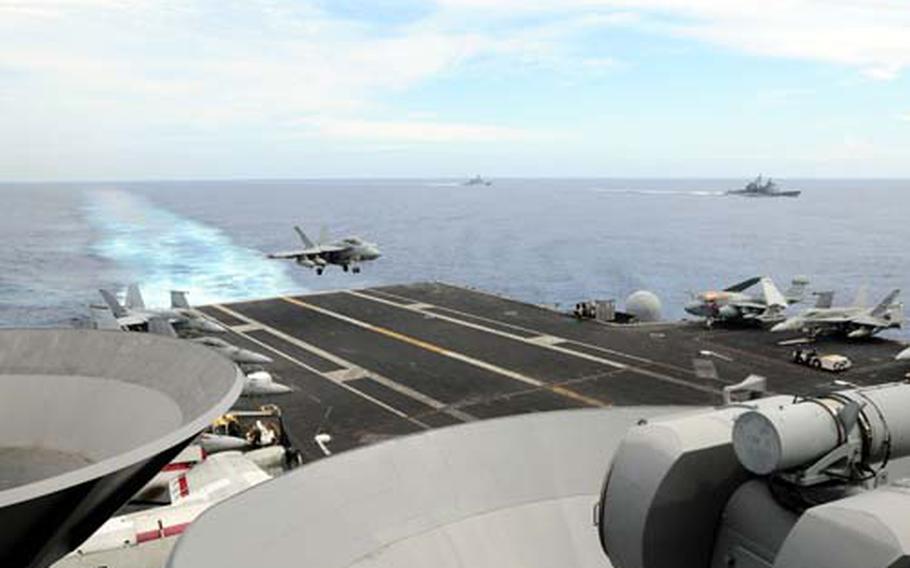 A sailor sprints away from an F/A-18 Hornet seconds before the aircraft catapulted from the flight deck of the USS George Washington on Friday. He&#39;d just given the thumbs up from the front wheels of the combat jet, indicating the pilot could take off. Hornets are catapulted off the deck, hitting 140 mph in three seconds to get enough forward momentum to launch from carrier. (Matt Orr / S&S) ABOARD THE USS GEORGE WASHINGTON &#8212; In a scene reminiscent of Tom Cruise&#8217;s &#8220;Top Gun,&#8221; a combat jet pulled up to the aircraft carrier&#8217;s catapult. Hand salutes were exchanged between the pilot and ground crew and, moments later, the plane screamed down the short runway, hitting 140 mph in just three seconds.

This year&#8217;s ANNUALEX was in full gear Friday. Ships and aircraft from the U.S. Navy and the Japan Maritime Self-Defense Force filled the ocean and skies off the coast of Okinawa for the annual naval maneuvers, which started last Tuesday and will conclude Wednesday. With 8,500 U.S. sailors participating, ANNUALEX is the biggest yearly exercise between the two nations, officials said.

Capt. Ross Myers, the commander of Carrier Air Wing 5, embarked aboard the George Washington, said the annual exercise is key to the two countries&#8217; warfighting skills.

&#8220;We learn valuable lessons working with each other, which allows us to operate at our full potential during a time of conflict,&#8221; Myers was quoted as saying in a Navy news release. &#8220;Having JASDF pilots on board helps us gain a greater understanding of each other&#8217;s capabilities.&#8221;