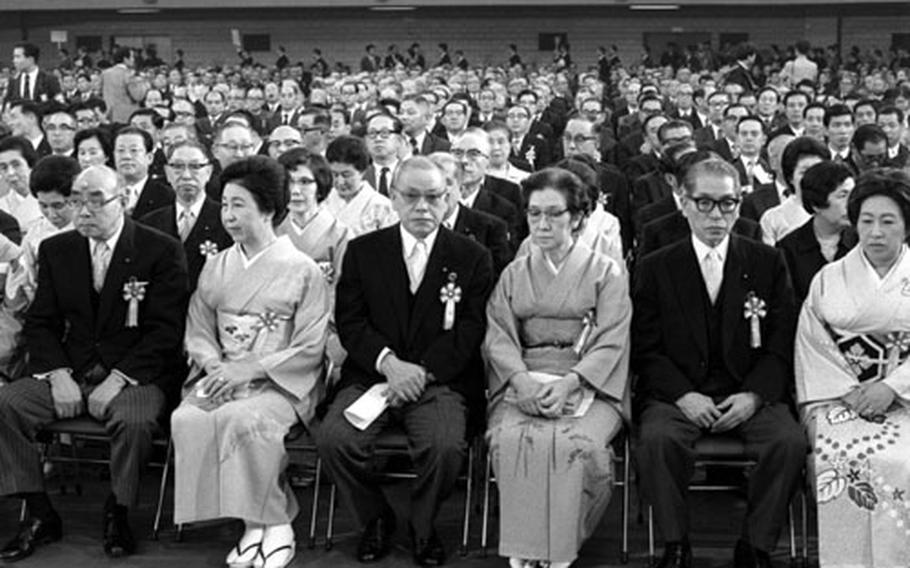 Dignitaries await the start of the ceremony. (Ralph Payne/Stars and Stripes) An overview of Tokyo's Budokan Hall during the reversion ceremony. (Ralph Payne/Stars and Stripes) 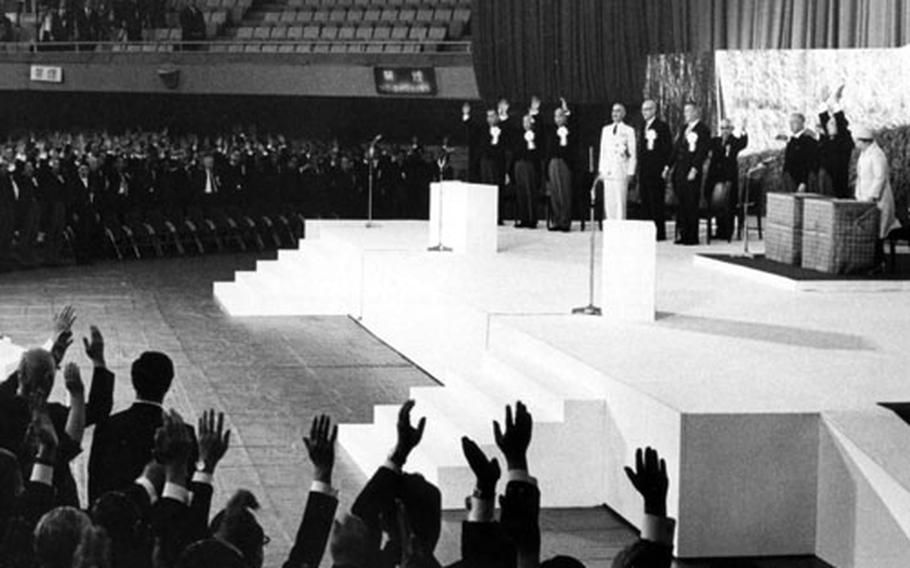 The crowd at the Budokan Hall offers a cheer at the end of the ceremony. (Ralph Payne/Stars and Stripes)

TOKYO &mdash; History was bittersweet at the Okinawa reversion ceremony here Monday morning at the Nihon Budokan. For the older members of the 10,000 Japanese in attendance the dignified affair recalled memories of a bloody battle 27 years ago.

In an address, which was interrupted by applause six times, Prime Minister Eisaku Sato called upon "the spirits of the millions who sacrificed their dear lives in the last war."

The prime minister pointed out the rarity of a conquered land regained through peaceful diplomatic negotiations. He acknowledged that U.S.-Japan relations have entered a new era, and called for "mutual cooperation with broader reliance and understanding."

The ceremony was particularly poignant for Sato. It is no secret that the reversion he strived for culminates his eight year tenure in office.

(In a press conference later Monday, Foreign Minister Takeo Fukuda said Sato had an "obsession" to get Okinawa back.)

Sato is expected to resign after the last day of the current Diet session (scheduled for May 26). Some political analysts expected him to step down on Reversion Day.

Sato received unexpected praise from Vice President Spiro T. Agnew, the U.S. representative to the affair. Altering the last sentence of his prepared text, Agnew said that Sato "has worked hard and effectively to bring about this day, and without (his) leadership this reversion could not have been realized."

The vice president then handed Sato the reversion proclamation signed by President Nixon while the crowd broke out in thunderous ovation.

Earlier, the audience greeted Agnew with a round of applause when he walked on stage followed by U.S. Ambassador to Japan Robert S. Ingersoll and Lt. Gen. James B. Lampert, former high commissioner of the Ryukyu Islands.

A large Japanese flag hung from the center of the Budokan's domed roof and another was suspended directly behind the center stage seats of the Emperor and the Empress.

Emperor Hirohito praised the Okinawan people for their "great sacrifices" during and after World War II their "untiring endeavors" that made reversion possible.

Terming the reunification "our long cherished desire," he called upon mainlanders and Okinawans to "further cooperate with each other and bend their efforts to establish and develop a peaceful and affluent Okinawa Prefecture."

Four "representatives of youth," one couple from the newly acquired 47th prefecture and another from the mainland made "expressions of determination" for the new era. Their closing handshakes, received by a hearty applause, demonstrated the unity between the motherland and the regained territory.

In addition to regular police, riot squad troops wearing protective helmets and padded arm protectors swarmed the ceremony site and were scattered around the side streets and main arteries. No visible demonstrations occurred during the proceedings, however. About 15 students hurled fire bombs at a freight train carrying U.S. Air Force jet fuel between Yokohama and Tokyo, UPI reported.

There were dozens of other protest demonstrations, rallies and marches but, aside from a few minor skirmishes, no violence erupted.

Most of the factions were protesting the retention of U.S. military installations on the Ryukyu Islands after reversion.