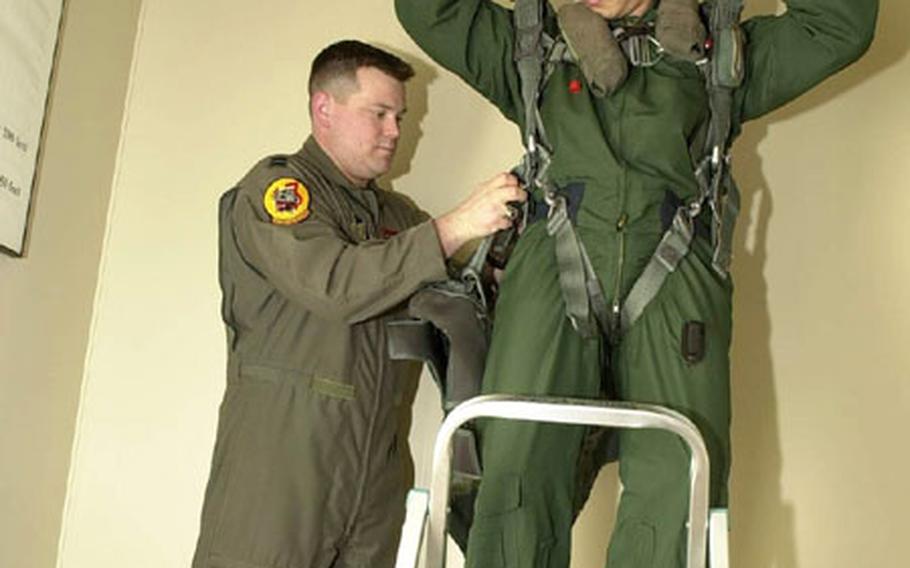 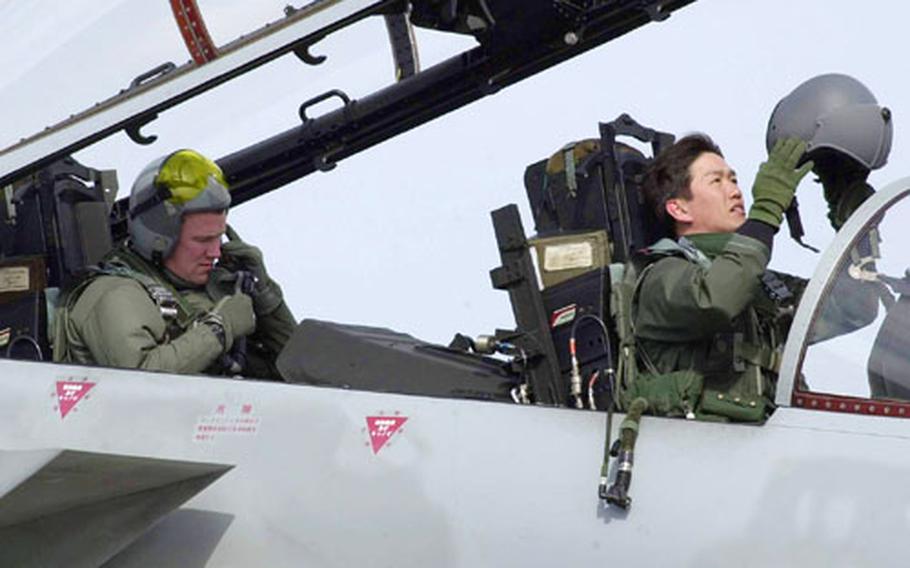 Capt. David Sundlov checks his harnesses in the back seat of a Japanese F-15 fighter at Misawa Air Base, Japan, as Capt. Jun Ikeda dons his helmet. (Wayne Specht / S&S) 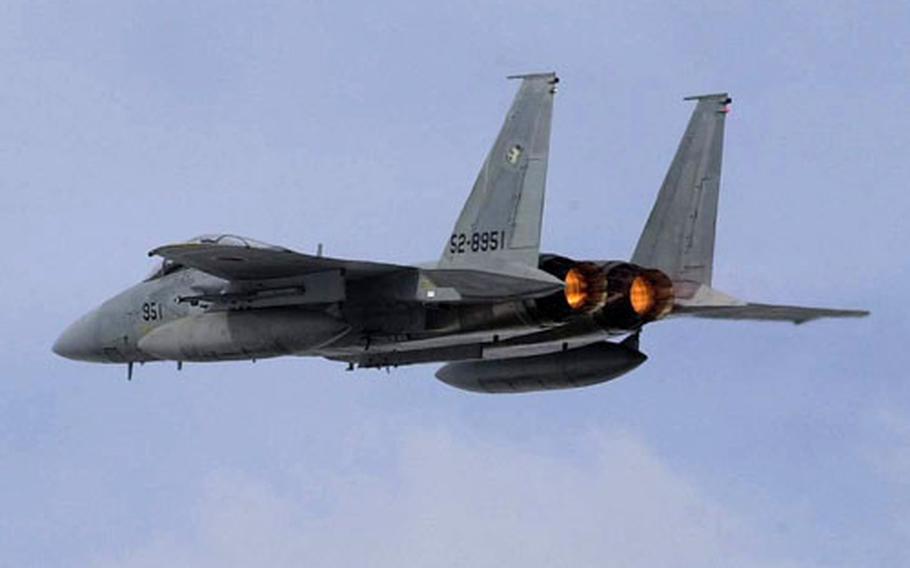 MISAWA AIR BASE, Japan &#8212; All air wars should be like this: A one-day affair without casualties, punctuated by a renewed appreciation for the airmanship of your strongest ally.

In a nutshell, that summed up Seikan War, a bilateral exercise between American and Japanese Air Self-Defense Force pilots played out here last week.

It was planned as a two-day exercise, but Friday&#8217;s flying activities were canceled after snow moved into the Misawa area, dropping ceilings.

By pooling the resources of JASDF and the Air Force, &#8220;we get to fight a lot more airplanes than we get to fly with on a daily basis,&#8221; Stambaugh said.

Flying activities took place high over the Sea of Japan off the west coast of northern Honshu, where offensive and defensive counter-air maneuvers were employed.

Bombings during the exercise were simulated.

&#8220;We learned the operational concepts of the U.S. Air Force. They are the world leader of air power, and to build our bilateral operational capability,&#8221; said Col. Yuji Okamura, defense and operations division chief for the Northern Air Defense Force.

As part of an exchange program during the exercise, several Air Force pilots were given the opportunity to fly in the F-15J, while the Air Force reciprocated by allowing Japanese pilots some air time in the F-16.

During his sortie, piloted by Capt. Jun Ikeda of the 201st Squadron from Chitose Air Base on Hokkaido, Sundluv and three other F-15s defended an imaginary ship on the Sea of Japan.

&#8220;We used various manuevers and tactics to defend it against other airplanes coming down,&#8221; said Sundluv, the 35th Fighter Wing&#8217;s deputy weapons officer.

He said the performance between the twin-engine F-15 and single-engine F-16 is similar.

He said the F-16&#8217;s role includes air-to-air and air-to-ground missions, as well as suppression of enemy air defenses, while the F-15&#8217;s forte is primarily in the air-to-air arena.

Ikeda, 30, scheduled to fly in an F-16 during the exercise, said he wanted to learn tactics from those pilots.

&#8220;The U.S. Air Force has a strike mission. They fly both offensive and defensive tactics, and I&#8217;m excited to take part in this exercise,&#8221; said Ikeda, who has accumulated 280 hours of flight time in the F-15 during a seven-year JASDF career.

Sundluv said flying in Seikan War gave him a better appreciation for his Japanese allies.

Sundluv noted he wasn&#8217;t ready to make the transition to the twin-engine F-15 just yet. He retains a special fondness for the F-16.