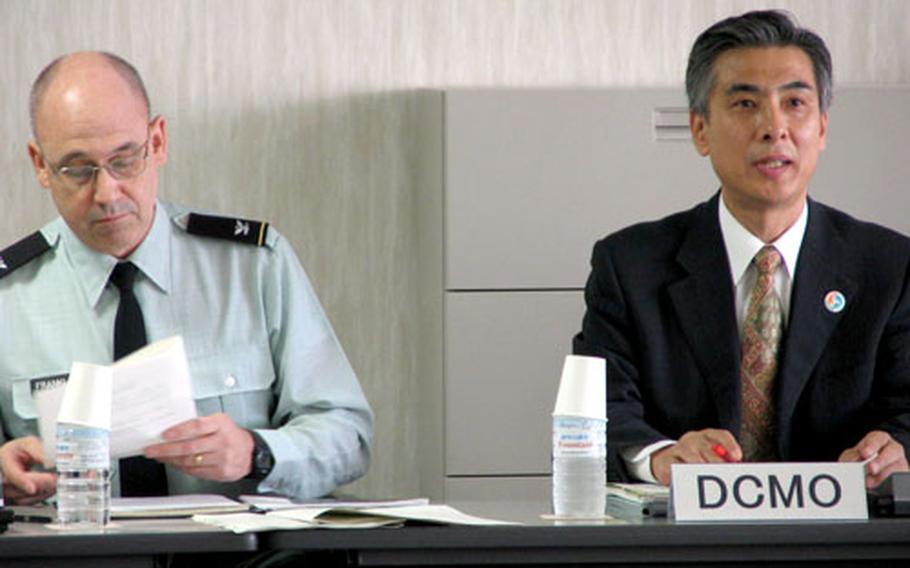 U.S. Army Col. Mark R. Franklin, chief of the Okinawa Area Field Office of U.S. Forces Japan, and Mitsuho Kayashima, Tokyo&#39;s director for Crisis Management in Okinawa, co-chair Tuesday&#39;s crisis management meeting. The committee was formed in response to confusion at the scene of the crash of a Marine helicopter in the city of Ginowan in August 2004. (David Allen / S&S)

The meeting &#8220;was successful in achieving our goals &#8230; of mutual cooperation between Japan and the U.S. relevant agencies,&#8221; stated a news release issued after the daylong meeting.

&#8220;We agreed to hold a joint disaster drill in the not-so-distant future,&#8221; Mitsuho Kayashima, director for Crisis Management in Okinawa, said at a briefing for media after the meeting. &#8220;The drill will involve all four branches of U.S. forces,&#8221; he said, adding that the details are pending.

Kayashima termed Tuesday&#8217;s meeting &#8220;very fruitful and significant,&#8221; building on guidelines established in 2005 and &#8220;exchanging ideas on the details.&#8221; Discussions included differences between the two communities, he said, such as structures of each organization.

Tuesday&#8217;s meeting was the crisis team&#8217;s second. It&#8217;s co-chaired by Kayashima and Army Col. Mark R. Franklin, chief of the Okinawa Area Field Office, U.S. Forces Japan. Kayashima is the second official the national government tapped to coordinate the Crisis Management Committee, a post created in 2004 after a Marine helicopter crashed that August on the Okinawa International University campus next to Marine Corps Air Station Futenma. After the crash, local officials and area residents said Marines initially barred police and firefighters from conducting their own on-site investigations.

During the crisis team meeting in November 2005, it was agreed that the U.S. military would hold disaster drills with national Japanese forces and Okinawa agencies at least yearly. Last March, the first paper drill was held on Kadena Air Base.

Taking part in Tuesday&#8217;s meeting were 42 officials representing the U.S. military and Japan and Okinawa agencies, including representatives from all U.S. services on Okinawa.