U.S., Japan kick off exercise amid tensions on Korean peninsula 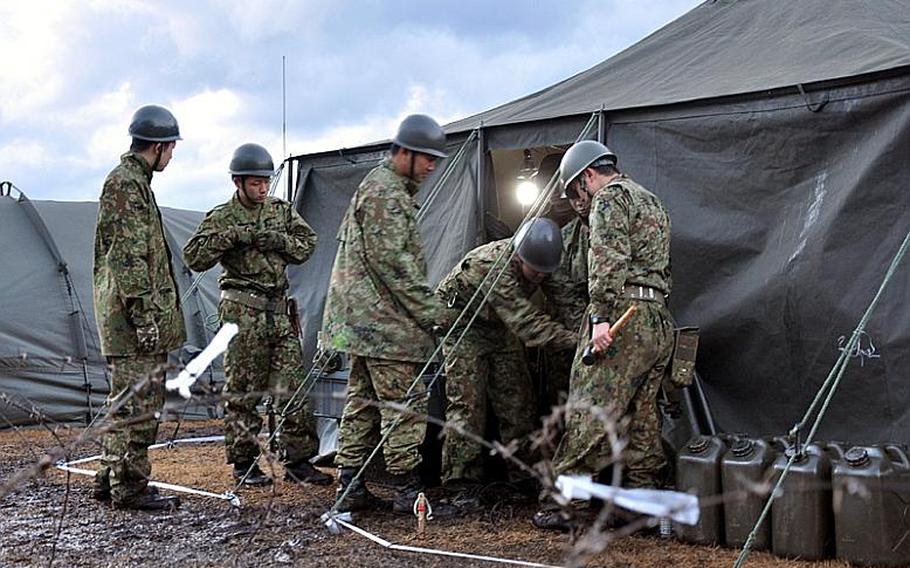 Members of the Japan Ground Self-Defense Force work on a tent at a bivouac site on Misawa Air Base, Japan, on Friday, the first day of Keen Sword 2011. The exercise includes more than 44,000 U.S. and Japanese troops across the country. Misawa's portion of the exercise will focus on a &#39;guard and protect&#39; mission of the base. (T.D. Flack/Stars and Stripes)

YOKOTA AIR BASE, Japan &mdash; The U.S. and Japan kicked off a military exercise Friday under the watchful eye of South Korean observers as tensions mount on the Korean peninsula.

The biennial Keen Sword exercise comes two days after a U.S.-South Korea sea exercise, and 10 days after a North Korean artillery attack on South Korea&rsquo;s Yeonpyeong island. Keen Sword will bring together 34,000 Japanese troops and 10,000 U.S. servicemembers, plus a combined 430 aircraft and 60 ships for missile-defense and other air, land and sea operations, officials said.

Although an unspecified number of South Korean officers will observe parts of the exercise &mdash; the first such participation by the country in the long-standing U.S.-Japan endeavor &mdash; the focus is on the defense of Japan, said U.S. military spokesman Lt. Col. Kenneth Hoffman.

It is unclear what role Japan would play should conflict break out on the Korean peninsula, but its anti-submarine warfare and air and sea reconnaissance units would likely be invaluable assets to U.S. and South Korean operations in such an event, said Michael Auslin, director of Japan studies for the American Enterprise Institute in Washington.

The inclusion of South Korean observers &ldquo;sends a strong political message in crisis like this&rdquo; about the solidarity among the three countries, particularly considering their collective rebuff of China&rsquo;s proposal to negotiate with North Korea in the aftermath of the latest attack, Auslin said. The countries this week rejected Beijing&rsquo;s suggestion of returning to the so-called six party talks &ndash; a forum including the U.S., the two Koreas, Japan, Russia and China aimed at ending North Korea&rsquo;s nuclear program.

The United States and the international community have been urging China &mdash; one of North Korea&rsquo;s few allies &mdash; to intervene in the current situation to help tamp down Kim Jong Il&rsquo;s regime.

But any response to North Korea stands to heighten tensions with China, which on Friday criticized the U.S.-Japan exercise for potentially escalating the current crisis, according to China&rsquo;s People&rsquo;s Daily.

Along with testing the U.S.-Japan missile defense operations, Keen Sword will include practice for air and sea operations to defend Japan&rsquo;s outlying islands, securing U.S. and Japanese bases, and search and rescue activities, officials said.

U.S. officials emphasized that the exercise is not a response to the Nov. 22 attack that killed two South Korean marines and two civilians.

&ldquo;Keen Sword 2011 has no relationship to any particular area of the world and has no connection with existing or perceived political or geographical situations, nor is it directed at any nation,&rdquo; Hoffman said.

The caption for the accompanying photo has been corrected from the original version.