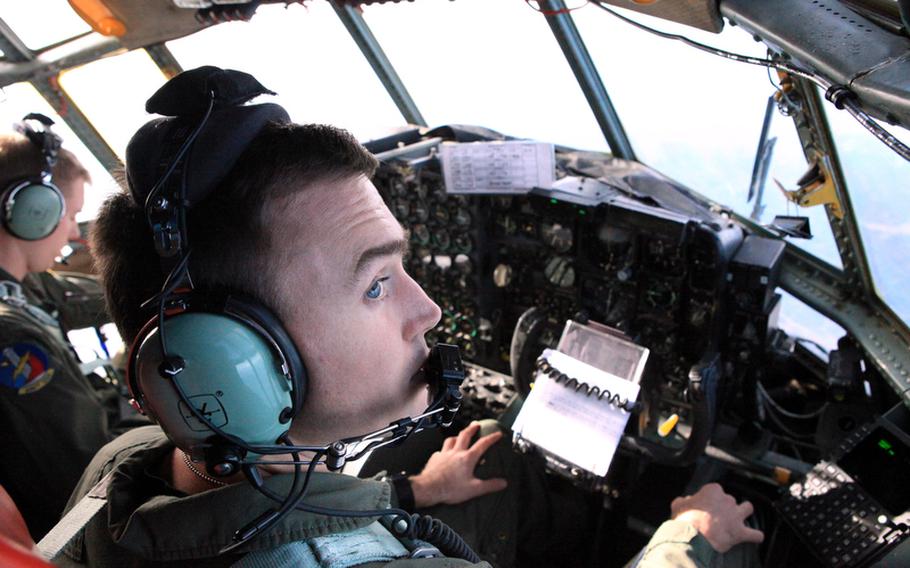 Capt. William Dunn, right, observes the conditions outside his C-130 as it flies toward the Sea of Japan on Monday as part of Keen Sword, a U.S.-Japan training exercise. (Grant Okubo/Stars and Stripes)

Capt. William Dunn, right, observes the conditions outside his C-130 as it flies toward the Sea of Japan on Monday as part of Keen Sword, a U.S.-Japan training exercise. (Grant Okubo/Stars and Stripes) 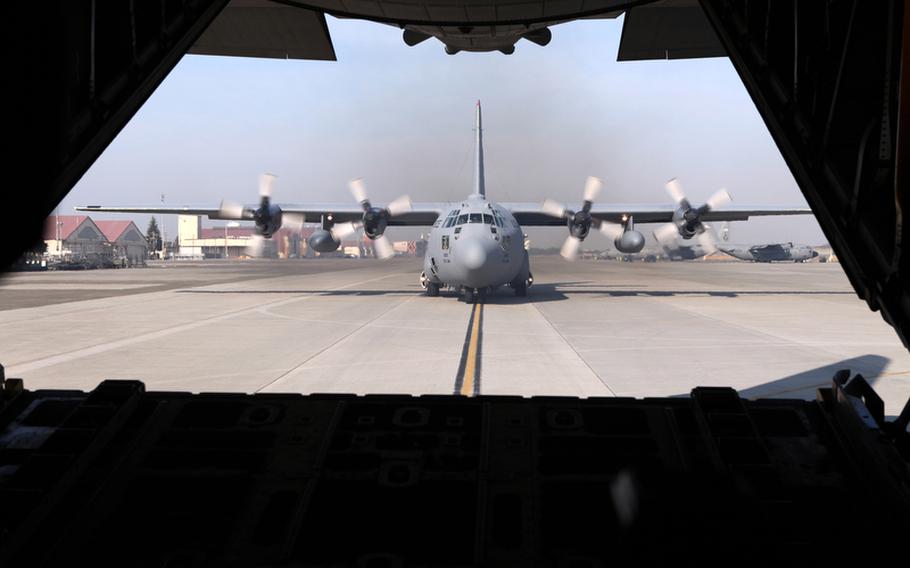 A C-130 out of Yokota Air Base, Japan, prepares for takeoff on Dec. 6, 2010. C-130s out of Yokota were flying over the skies of Japan as part of Keen Sword, a U.S.-Japan training exercise. (Grant Okubo/Stars and Stripes) Col. Otto Feather, 374th Airlift Wing Commander, speaks with reporters Monday before Keen Sword, a U.S.-Japan training exercise, which flew over parts of Japan and over the Sea of Japan. (Grant Okubo/Stars and Stripes) Airmen from the 374th Airlift Wing at Yokota Air Base, Japan, make some last-minute preparations before Keen Sword, a U.S.-Japan training exercise. (Grant Okubo/Stars and Stripes) 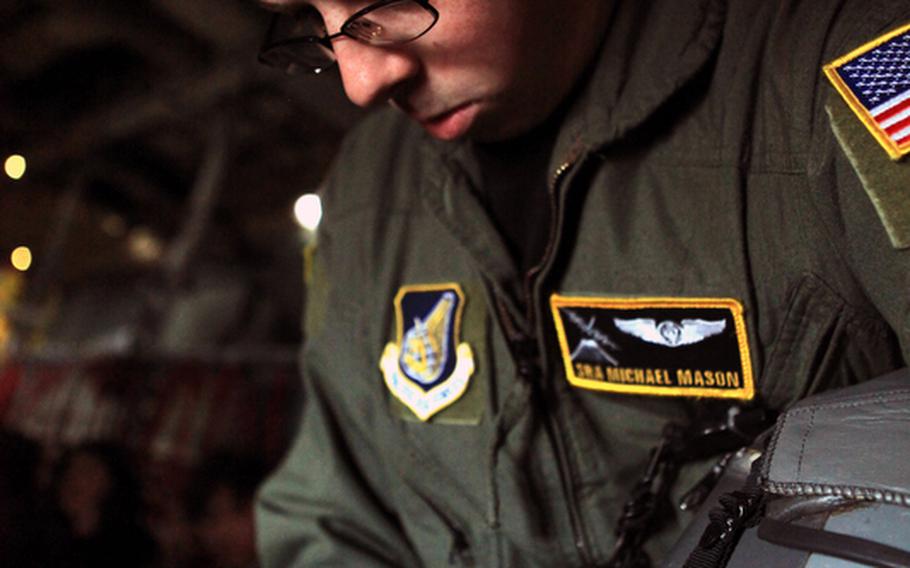 Senior Airman Michael Mason, 374th Airlift Wing, makes some last-minute checks inside a C-130 before it takes off to participate in Keen Sword, a U.S.-Japan training exercise over Japan. (Grant Okubo/Stars and Stripes) 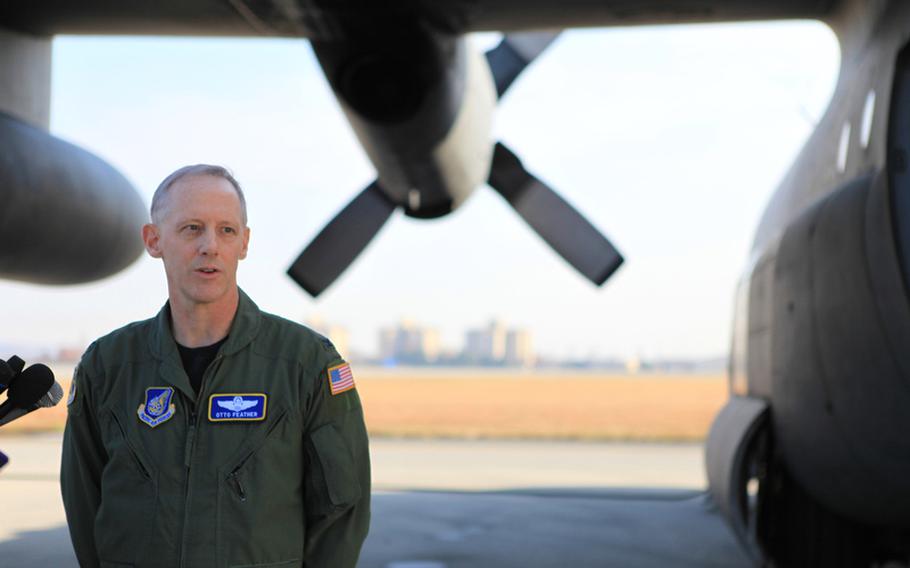 Col. Otto Feather, 374th Airlift Wing Commander, speaks with reporters before C-130s take off to participate in Keen Sword, a U.S.-Japan training exercise, which flew over parts of Japan and over the Sea of Japan. (Grant Okubo/Stars and Stripes)

YOKOTA AIR BASE, Japan &mdash; U.S. and Japanese fighter jets practiced combat and humanitarian missions on Monday &ndash; training that could become real if the crisis on the Korean peninsula continues to escalate.

Eight U.S. F-16s and 12 Japanese F-15s conducted simulated air and maritime strikes and defense operations over the Sea of Japan during the fourth day of the bilateral Keen Sword exercise. On the other side of the sea, South Korean officials announced it would test-fire artillery at 29 locations this week &ndash; including the border island that North Korea attacked two weeks ago.

While all parties involved say the U.S.-Japan training and the South Korea artillery fire were planned well before North Korea&rsquo;s Nov. 23 artillery strike that killed four on Yeonpyeong island, there is a strong message directed toward the North: Any further provocations from North Korea could be met with serious resistance from the three allies.

For the first time, South Korean officials were invited to take part as observers in the Keen Sword exercise. And while Japan&rsquo;s pacifist constitution limits its military engagements to self defense, the country&rsquo;s prime minister made it clear last week that the country would lend forces to actions directed against Kim Jong-il&rsquo;s regime.

&ldquo;We will cooperate with South Korea, as well as the United States, and the three of us together will decisively counter North Korea&rsquo;s reckless and outrageous acts,&rdquo; Prime Minister Nato Kan said last week.

A humanitarian relief plan for North Korea was expected to be discussed at a meeting Monday in Washington between the United States, Japan and South Korea, Japan&rsquo;s Asahi Shimbun reported Monday.

In 2003, Japan estimated as many as 150,000 North Korean refugees could flood Japan if a conflict break out on the peninsula. But little has been done in preparation, the newspaper reported.

U.S. military officials have said the relocation of Japan&rsquo;s Air Defense Command from nearby Fuchu to Yokota will enhance cooperation on the U.S.-Japan missile defense shield, established in the wake of North Korea&rsquo;s 1998 Taepodong-1 ballistic missile test. But whether Japan would deploy its missile defense assets &mdash; including sea and land-based radar, tracking and engagement technology &mdash; and other military resources should conflict erupt on the Korean peninsula is unclear.

Late last week, China criticized the Keen Sword exercise as an obstacle to easing tensions on the Korean Peninsula, and it reiterated its call for increased diplomatic efforts, the Washington Post reported.

&ldquo;Brandishing of force cannot solve the issue,&rdquo; Chinese Foreign Ministry spokeswoman Jiang Yu said. &ldquo;Some are playing with knives and guns while China is criticized for calling for dialogue. Is that fair?&rdquo;

When asked to comment on whether the timing of the Keen Sword exercise could escalate tensions with North Korea, Air Force Col. Otto Feather, commander of the 374th Airlift Wing at Yokota: &ldquo;We wouldn&rsquo;t curtail this because of the recent incident.&rdquo;

The situation in North Korea has not changed the timing, tempo or crux of the Keen Edge exercise, according to exercise spokesman Capt. David Herndon.

The captions on the accompanying photos have been corrected from the original versions.