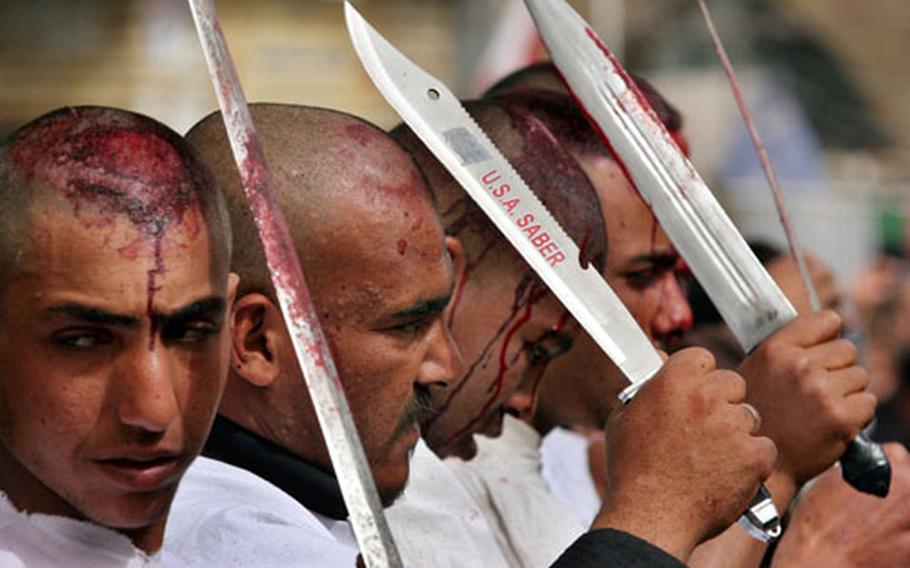 Iraqi Shiite Muslims flagellate themselves during a procession in Karbala on Monday. A million Shiite Muslim pilgrims descended on the holy city of Karbala to mark the 40th and final day of mourning for Imam Hussein, the Prophet Muhammad’s grandson, who died in Karbala in 680. (Hadi Mizban / AP)

American and Iraqi troops are undertaking a massive security operation aimed at preventing sectarian attacks on throngs of Shiite pilgrims in Karbala.

By late Monday afternoon, no incidents had been reported in the city, which attracted an estimated 5 million pilgrims from throughout the Middle East. Monday marked the end of Arba&#8217;een, a major Shiite holiday.

The threat of sectarian violence has been among the highest concerns since the Feb. 22 bombing of a Shiite shrine in Samarra; that attack sparked a wave of reprisals between Sunni and Shiite factions.

Security in the area included American air cover and numerous Iraqi army checkpoints along the roads around Karbala packed with pilgrims on foot.

Tully and others have been working on the security plan with Karbala officials. Of particular concern is the area around the Hussein shrine downtown, where the pilgrimage culminates.

The security operation involved moving U.S. and Iraqi forces into the area from other regions. To fill the voids left by those moves, the U.S. command in Baghdad called up a 1st Armored Division battalion that had been on ready reserve in Kuwait.

Under a plan dubbed Operation Scales of Justice, those troops have taken up security positions in Baghdad.

&#8220;We have kicked off &#8216;Scales of Justice&#8217; to give Iraqis confidence that the Iraqi security forces and coalition forces, particularly in Baghdad, are there in larger numbers, are there, they see them on the street a lot more &#8230; I think that operation is having the effect we want inside Baghdad,&#8221; Lt. Gen. Pete Chiarelli, commander of Multi-National Corps-Iraq, said in a briefing with Pentagon reporters on Friday.

But Chiarelli was hesitant to attribute all of the violence of recent weeks to sectarian fissures.