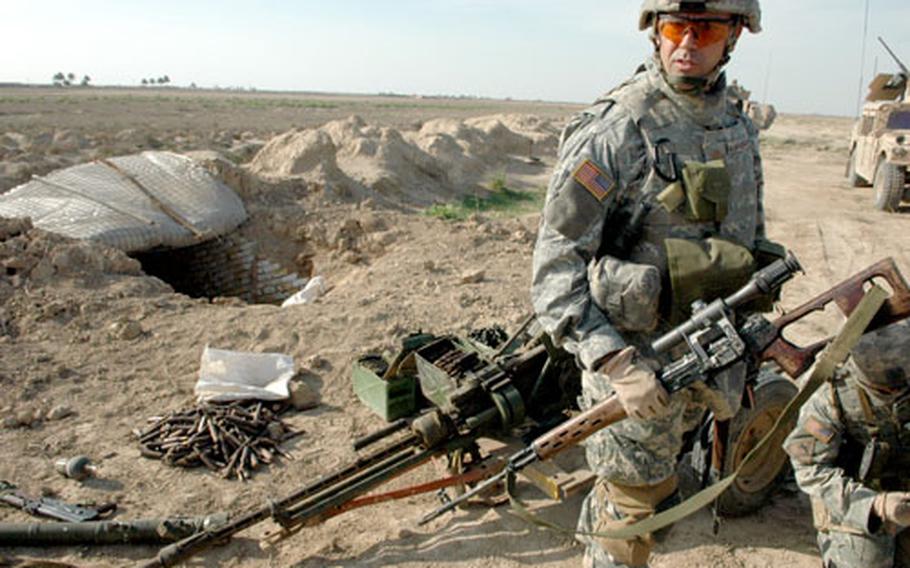 Maj. John Digiambattista inspects the anti-aircraft gun and other weapons found during the chase of several insurgents. (Andrew Tilghman / S&S)

Maj. John Digiambattista inspects the anti-aircraft gun and other weapons found during the chase of several insurgents. (Andrew Tilghman / S&S) 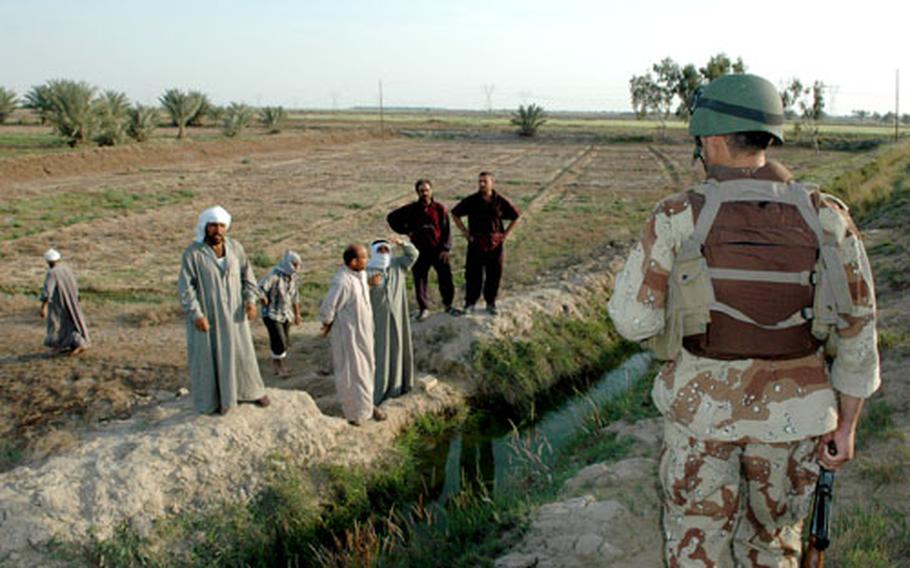 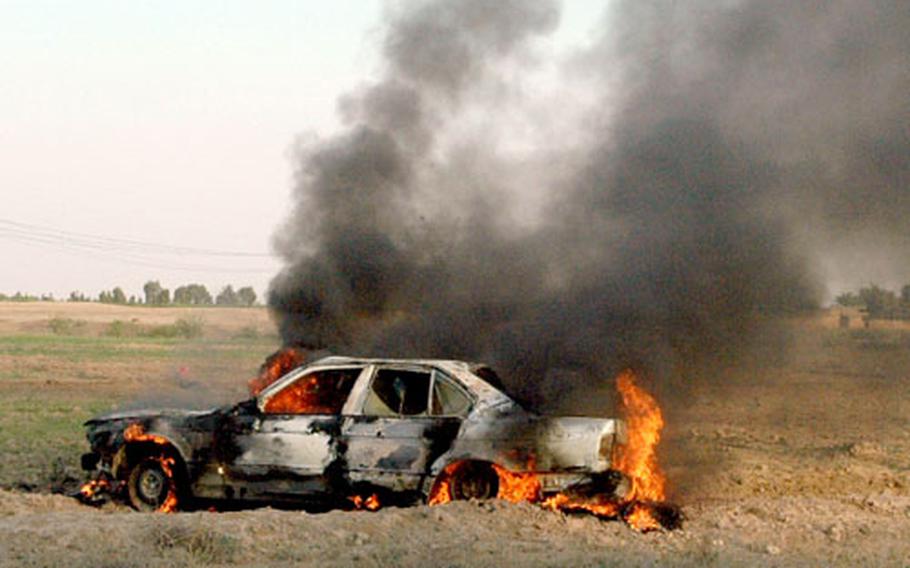 A car used by insurgents burns Friday after it is abandoned during a firefight with U.S. and Iraqi troops. (Andrew Tilghman / S&S) 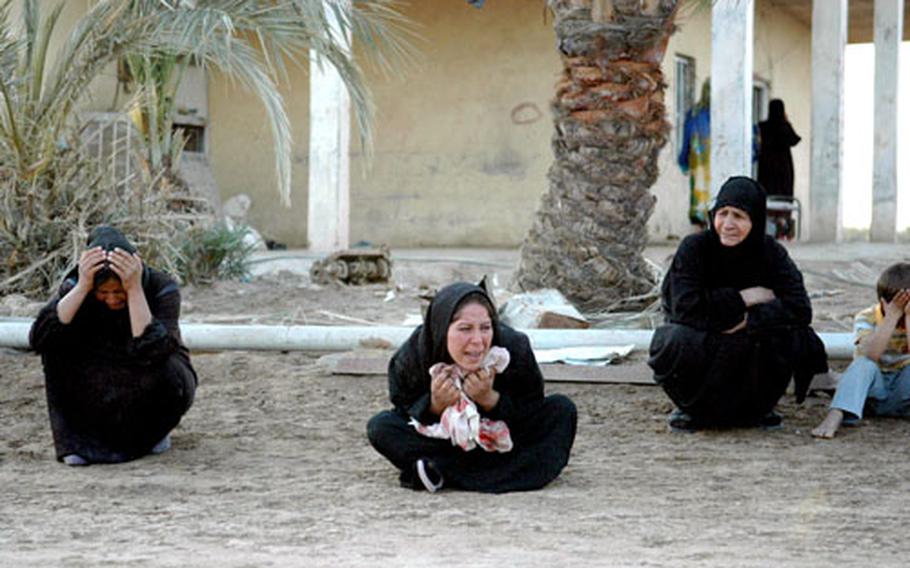 Iraqi women in a farming village mourn the loss of the men who were killed last week when a group of Sunni insurgents massacred 18 Shiite villagers. (Andrew Tilghman / S&S)

BAQOUBA, Iraq &#8212; More than a dozen insurgents suspected in the mass killing of 18 Shiites last week were arrested or killed Friday after U.S. and Iraqi army soldiers spent several hours chasing them through the rural farmland north of Baghdad.

The insurgents were spotted Friday in the flat and lawless area known to U.S. soldiers as &#8220;Road Warrior land,&#8221; which runs along a historic dividing line between the mostly Shiite areas of northwestern Baghdad and the Sunni villages of Diyala province.

Iraqi soldiers began chasing the team of insurgents after finding them loaded into seven cars roaming a main road and trying to hijack a cement truck early Friday afternoon.

After the insurgents scattered, about 200 Iraqi soldiers and nearly 100 U.S. troops scoured the area and eventually killed four, wounded one, detained 10 and pushed three others into the hands of local armed villagers, soldiers said.

&#8220;This is going to have a huge impact,&#8221; said Lt. Col. Thomas Fisher, commander of the 1st Battalion, 68th Armor Regiment, 4th Infantry Division. &#8220;These are the people who have been causing a lot of problems and to have them out of the way is going to really help to settle things down.&#8221;

The unexpected firefight marked the first time that the U.S. troops and the Iraqi army in western Diyala have successfully coordinated an operation without advanced planning, Fisher said.

The U.S. and the Iraqi army have no common communications equipment, forcing U.S. soldiers and Iraqi soldiers to coordinate through interpreters during face-to-face meetings.

A group of local Shiite villagers told U.S. and Iraqi soldiers that the men captured and killed on Friday were the same as those who appeared last week dressed in Iraqi army uniforms and masks and massacred 18 Shiites at a local store.

U.S. troops say they are part of a radical Sunni-dominated group known as Tawad W&#8217;al Jihad.

During the chase, which lasted for several hours and spanned miles of rural farmland, U.S. troops also found a large weapons cache that included several anti-aircraft weapons and dozens of mortar rounds buried in a large brick-walled repository.

A six-truck Iraqi army patrol found the insurgents trying to hijack the cement truck and chased the roughly 20 men in sedans toward a farmhouse. The Iraqi soldiers dropped back after insurgents in the house fired machine guns and rocket propelled grenades.

As more Iraqi and U.S. soldiers arrived, the soldiers killed four men, while seven cars carrying the insurgents scattered in all directions. U.S. troops saw one pair of cars heading north and chased them into a nearby farm, where three men were eventually detained.

Those insurgents were apparently running toward a large weapons cache that the soldiers found as they searched the area.

Iraqi and U.S. troops chased several other cars into farmland in the opposite direction. As U.S. helicopters buzzed overhead, several insurgents jumped out of their cars and swam across the narrow Diyala River.

Several men from the local Shiite villages also grabbed weapons and joined in the fight. As at least three insurgents swam across the river, villagers said they contacted residents of the village on the far bank who came out and detained the fleeing men.

U.S. troops Saturday were still searching for the men allegedly detained by the villagers.

While the insurgents were likely radical Sunnis who had killed and harassed local Shiite villagers, U.S. troops here do not consider the violence sectarian in nature.

They say the insurgents were not killing people simply based on hate, but to stir up sectarian tensions and civil unrest. They said the attack was similar to many recent ones aimed at inflaming local tensions and undermining the fledgling democracy, which more direct attacks on U.S. and Iraqi security forces have failed to do.

&#8220;When I think of sectarian violence, I think of people killing each other because of their religion. In this case they were not killing people because of who they are, but because they want to start a civil war,&#8221; Fisher said.

&#8220;It comes down to motivation. This was terrorism in is rawest form, trying to spark something that would tear people apart.&#8221;

While several insurgents likely escaped Friday, the majority was either captured or killed. While that may have a calming affect in the near term, troops expect other instigators to return to the volatile area.