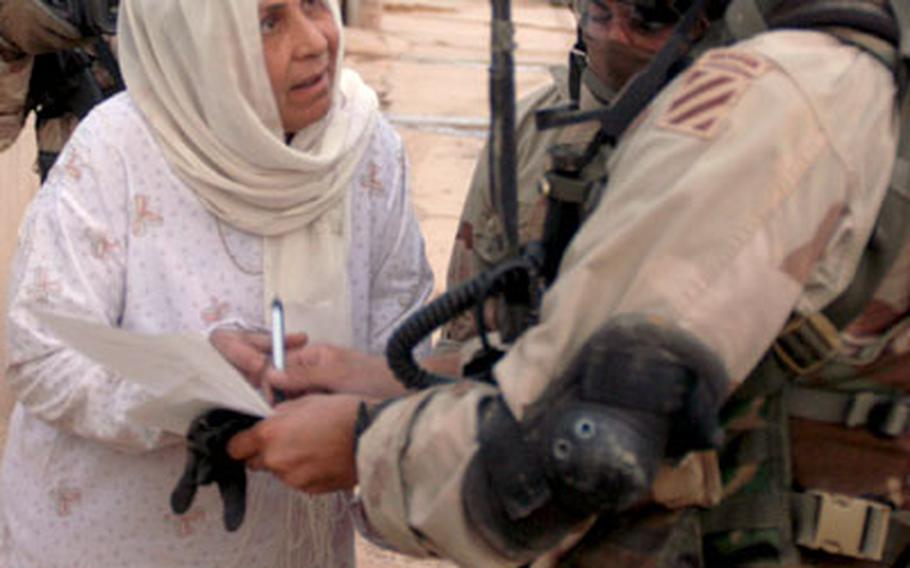 Capt. Derrick Hernandez offers financial compensation to a homeowner who had her door damaged during the search. (Kevin Dougherty / S&S)

Capt. Derrick Hernandez offers financial compensation to a homeowner who had her door damaged during the search. (Kevin Dougherty / S&S) 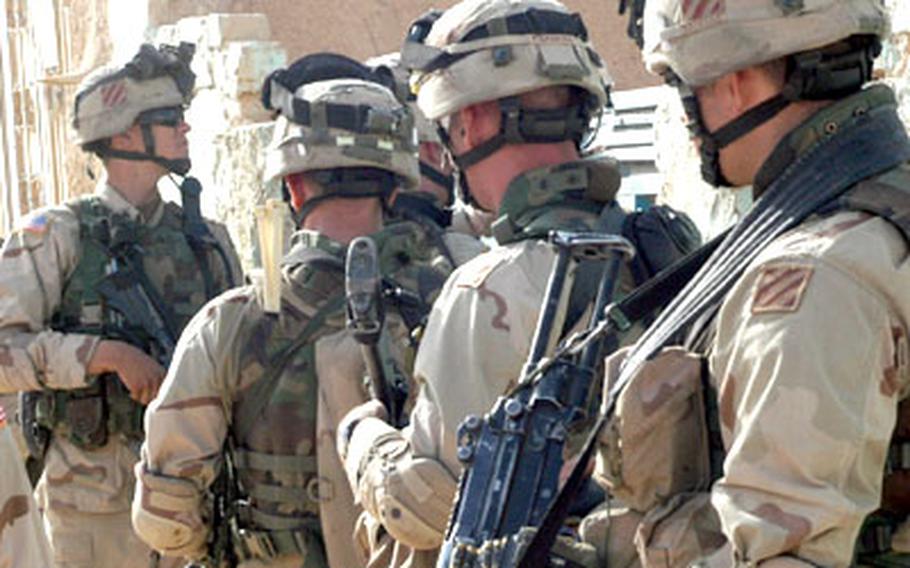 Third Infantry Division troops based near Beiji, Iraq, prepare to rush into a courtyard on the north edge of town. The soldiers are with Company B, 2nd Battalion, 7th Infantry Regiment, 1st Brigade. (Kevin Dougherty / S&S)

BEIJI, Iraq &#8212; The old man in a flowing white robe caught the hard-charging Americans off guard.

For the soldiers, this humble abode was the last one they would check, though at the time, they didn&#8217;t know it. A cordon-and-search operation often ends abruptly, when commanders compare notes and declare an area swept.

Such was the case when this band of 3rd Infantry Division soldiers entered a courtyard and came face to face with 72-year-old Anwar Abdullah. Before Capt. Derrick Hernandez could turn to his interpreter for help, Abdullah rendered his presence unnecessary.

An English-speaking Iraqi elder is a rare find.

Sgt. George Morris gave the final intel update to the soldiers of Company B, 2nd Battalion, 7th Infantry Regiment. Over the last 24 hours, he says, there had been &#8220;nothing of significance.&#8221; No small-arms fire. No roadside bombs. No car bombs.

Getting &#8220;out there&#8221; was touch-and-go up until that point. A blistering sandstorm had blown through Iraq just hours earlier, causing a 90-minute delay.

The sand at Forward Operating Base Summerall has the consistency of talcum powder. One soldier described the sandstorm as a cross between &#8220;a blizzard and fog with grit.&#8221; By the time the task force left for Beiji, the storm had eased considerably, though the air remained a murky, muddy mist.

As he nears the base gate, Hernandez cuts off the song in his Humvee to play a rendition of the regimental song, a move that draw jeers from his gunner, Sgt. Bobby Stepro, and his driver, Spc. Brian Krutcher. So, for good measure, along with a dash of insubordination, he plays it again.

The operation was one in an ongoing series of maneuvers designed to decapitate the insurgency in Beiji. Around 600 soldiers, including 200 Iraqis, participated in Monday&#8217;s mission.

Once outside the gate, the convoy turns onto Highway 1; all the vehicles have their lights turned off.

Krutcher and the other drivers use night-vision goggles to see. Hernandez, Krutcher and Stepro knock fists, wishing each other well.

Various delays have set Bravo Company back 30 minutes. By the time Hernandez&#8217;s vehicle reaches its first objective, the day is dawning. Still, much of Beiji appears to be asleep.

The soldiers make a beeline for a corner house. Minutes later, they reappear. It seems no one has lived in the house for a week. They move on to their second objective, hoping to find what the military calls &#8220;people of interest&#8221; or &#8220;high-value targets.&#8221;

The second stop produces a better result, in the sense that at least three men and two women occupy the house. The men stand spread-eagle along a fence, while the women sit on the ground. Soldiers search the house.

Hernandez reveals that his men are looking for high-value target No. 4, though, as it turns out, he&#8217;s not at this house. The only item of interest is information the family has on &#8220;How to Build a Baath Democracy.&#8221;

The captain hands the owner of the house, an elderly woman, $5 for slightly damaging her metal front gate. He thinks twice, and exchanges it for a $20 bill.

By the time the team reaches the house where Abdullah lives, the rest of the battalion-level operation is winding down.

&#8220;I was a teacher at the school in Beiji,&#8221; Abdullah says. He rattles off the courses he taught: Arabic, English, history and geography.

For a few minutes, Hernandez and the Army interrogator engage the man in conversation, hoping to glean from him some useful information. The man tells them his birth year, when he became a teacher, when he retired and other personal tidbits. He then offers them tea, but the interrogator begs off.