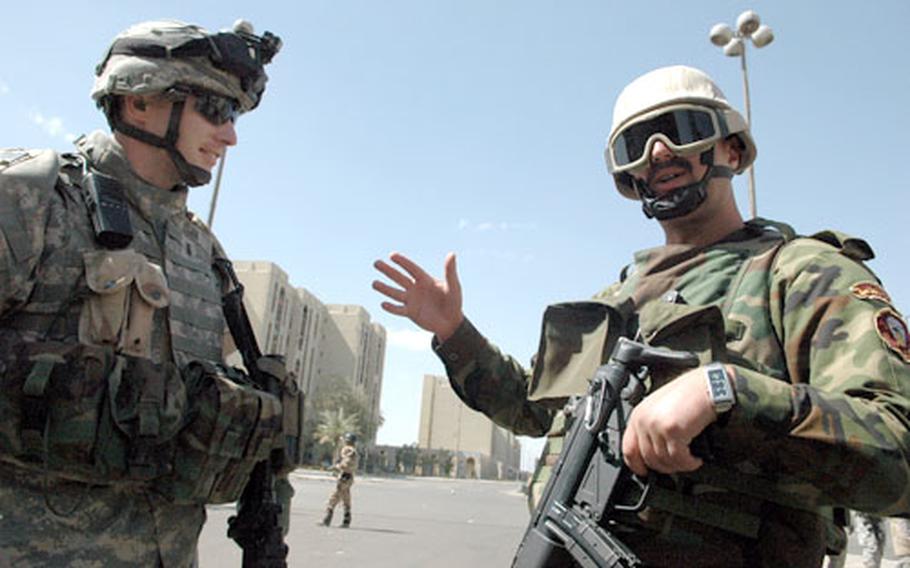 First Lt. Mike Egan and an Iraqi soldier talk at a traffic checkpoint in downtown Baghdad, as Iraqi government officials took their oath of office in the nearby International Zone. (Andrew Tilghman / S&S)

First Lt. Mike Egan and an Iraqi soldier talk at a traffic checkpoint in downtown Baghdad, as Iraqi government officials took their oath of office in the nearby International Zone. (Andrew Tilghman / S&S) 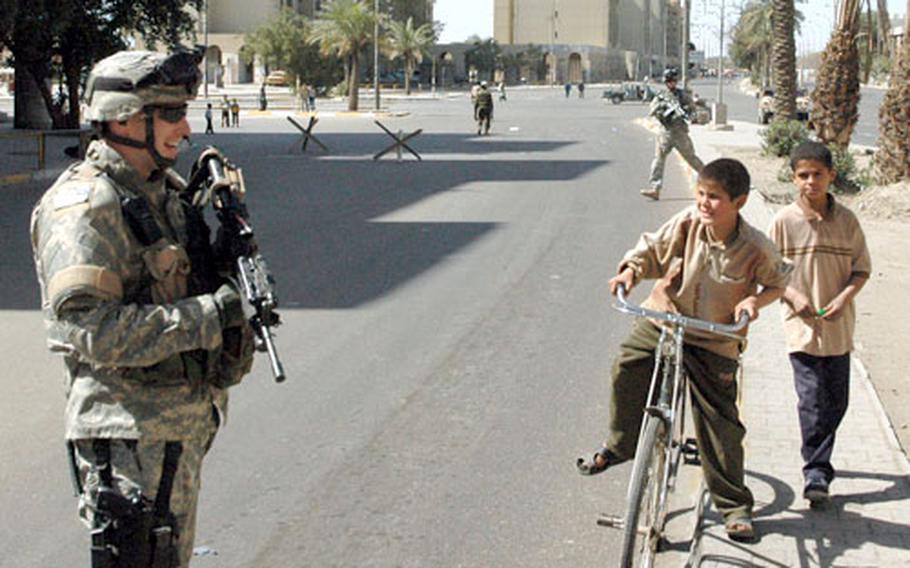 Throngs of children played soccer in the usually bustling downtown streets, as the Iraqi army and Iraqi police manned checkpoints across the capital to enforce a citywide vehicle ban.

U.S. troops also traveled throughout the city in a show of force designed to reassure concerned residents.

&#8220;The idea is to be seen by as many people as possible, to make people feel like we are making their neighborhood more secure,&#8221; said 1st Lt. Mike Egan as his Humvee patrol sped down a palm tree-lined boulevard of shops and offices.

U.S. troops say the government negotiations offer a critical window of opportunity to help reduce the rising sectarian tensions that have fueled dozens of deadly attacks on civilians over the past several days.

&#8220;Civil unrest is a possibility, but I think we have a very good opportunity to divert that, and one of the things that needs to happen is the seating of this government,&#8221; said Lt. Col. Mark Meadows, commander of the 1st Squadron, 71st Cavalry Regiment of the 10th Mountain Division.

Meadows&#8217; roughly 400 soldiers operate in an area controlled by the Iraqi army, a large swath of neighborhoods on the western bank of the Tigris River that includes many key business districts and affluent residential areas.

The squadron serves as a large-scale military transition team providing ongoing support and assistance to an Iraqi brigade. Typically they operate joint patrols with the Iraqi soldiers, but on Thursday they patrolled independently as many Iraqi soldiers manned checkpoints.

The squadron reported no attacks on U.S. troops as the government negotiations got under way Thursday.

Yet the U.S. soldiers reported violence elsewhere. On Wednesday night, soldiers found three bodies on a roadside in eastern Baghdad. On Thursday, three other men were found at nearly the same location and killed in a similar fashion, bound and shot execution-style. The identity of the victims and the motivation for the killings remained unclear.

Meanwhile, residents waited anxiously for news about their new government.

&#8220;We voted for them, now we want results. We want a solution to the problems in this country,&#8221; said Mohamed Saad Humadi, a 42-year-old Baghdad who sits on his local neighborhood council.

Humadi was shopping at a fruit stand near Haifa Street on Thursday afternoon when he said he was pessimistic about the prospects for a new government.

Abed Al-Kareem Saba, an unemployed father of four who lives in the Haifa Street neighborhood, said his religious faith gave him cause for optimism.

&#8220;God willing, they will form a new government and things will get better for this country,&#8221; Saba said.