A paratrooper with Alpha Troop, 5th Squadron, 73rd U.S. Cavalry Regiment signals a local man and his donkey through an intersection in the Fadhil neighborhood of east Baghdad. U.S. forces here are working to build up a nascent Iraqi army and government presence after the arrest of a local militia leader last month who essentially ran the area. (Geoff Ziezulewicz / S&S)

A paratrooper with Alpha Troop, 5th Squadron, 73rd U.S. Cavalry Regiment signals a local man and his donkey through an intersection in the Fadhil neighborhood of east Baghdad. U.S. forces here are working to build up a nascent Iraqi army and government presence after the arrest of a local militia leader last month who essentially ran the area. (Geoff Ziezulewicz / S&S) 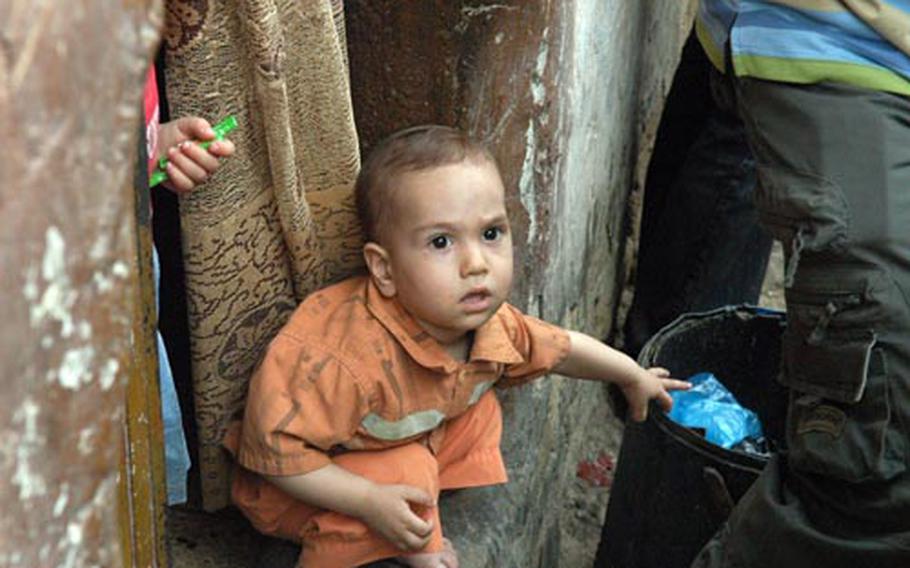 A child looks on as soldiers and local politicians figure out which trash piles to clean up in the maze-like “mahallas” in Baghdad&#39;s Fadhil neighborhood last week. (Geoff Ziezulewicz / S&S) 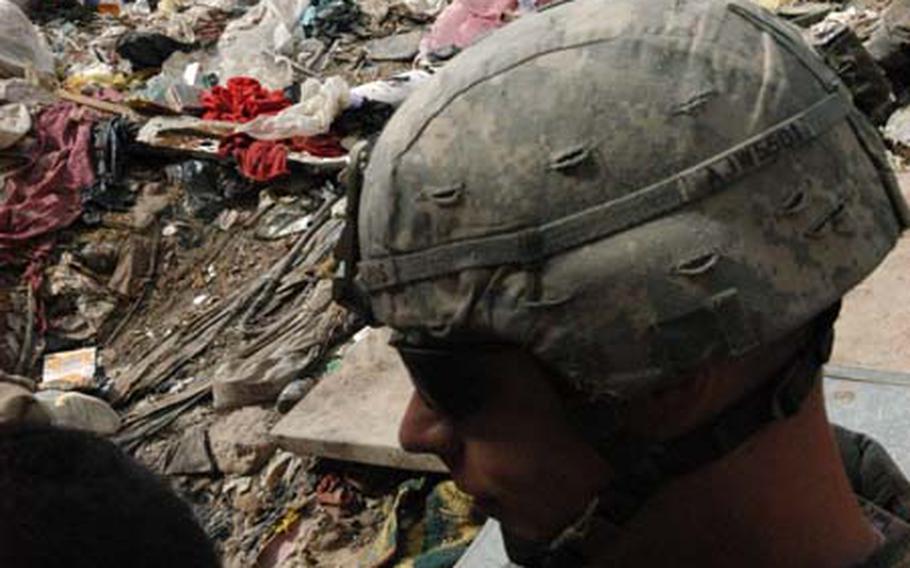 A woman is scolded by U.S. paratroops last week after her son was seen with a realistic-looking toy gun in Baghdad&#39;s Fadhil neighborhood. (Geoff Ziezulewicz / S&S) Sgt. Walter Jackson of Alpha Troop, 5th Squadron, 73rd U.S. Cavalry Regiment stands next to trash coming out of the windows last week in Baghdad&#39;s Fadhil neighborhood. Jackson and other paratroops stationed in the area were leading civil affairs soldiers and local politicians around to see which of the giant garbage piles should be cleaned up first. (Geoff Ziezulewicz / S&S)

BAGHDAD &#8212; American forces in Baghdad&#8217;s Fadhil neighborhood are continuing to help solidify Iraqi government efforts following the March 28 arrest of a local militia leader that left a power vacuum &#8212; one that U.S. commanders say insurgent groups may look to exploit in the near future.

And while disarmed "Sons of Iraq" members are still getting paid while manning checkpoints with the Iraqi army, U.S. troops are working to get official security forces able to stand on their own.

In the end, the Fadhil "Sons of Iraq" members, now disarmed and largely stripped of their authority in the area, will be a key going forward.

If the Iraqi government doesn&#8217;t pay them, some may turn back to insurgents groups to get paid, 1st Sgt. Robert Cobb, of Troop A, 5th Squadron, 73rd Cavalry Regiment, said.

"Which way will it turn?" he said. "Will the government follow through and give them jobs, or will they seek employment elsewhere? It&#8217;s the highest bidder."

For now, the military is using the "Sons of Iraq" members&#8217; local knowledge to help weed out suspicious characters entering the area.

Adil Mashhadani, the leader of Fadhil&#8217;s "Sons of Iraq," was arrested on extortion and terrorism charges last month by Iraqi forces.

Before his arrest, Mashhadani&#8217;s group was the only Iraqi security or governing presence in this neighborhood of about 50,000.

Mashhadani, himself a former insurgent before siding with the United States in 2007, allegedly had his hand in various insurgent groups, from al-Qaida in Iraq to the Mahdi Army. American commanders here say those groups may be looking to exploit his absence as the Iraqi army and government work to establish a presence here and gain local trust.

The fact that Fadhil remains up for grabs makes continued support of the Iraqi government&#8217;s efforts that much more critical, said Lt. Col. David Buckingham, commander of the cavalry regiment, part of the 82nd Airborne.

"We are concerned about who fills the vacuum," Buckingham said. "If [Iraqi soldiers] don&#8217;t fill the vacuum, someone else will."

Mashhadani&#8217;s arrest prompted an eight-hour firefight between his supporters and U.S. and Iraqi forces on the night of March 28. The "Sons of Iraq" were disarmed the day after the fight, but Buckingham said Mashhadani also has a couple hundred acolytes outside the group&#8217;s ranks.

Anti-tank mines, rocket launchers and other ordnance far beyond the group&#8217;s standard-issue AK-47s were found in some "Sons of Iraq" residences after the fight.

Buckingham said payment irregularities with other "Sons of Iraq" groups earlier this year were the result of bureaucratic fumbling.

"As with any bureaucracy, there&#8217;s hiccups in it," he said. "Shoot, the Army occasionally messes up my pay."

Despite questions regarding the Iraqi army&#8217;s ability to control Fadhil, these Iraqi soldiers are better than the ones Cobb saw during his 2007 deployment to Diyala province.

While challenges still exist, Cobb said, he sees the Iraqi soldiers gaining confidence and self-esteem while learning to make operations intelligence-driven instead of at random.

The United States is turning over control and pay of these groups, which were a stopgap measure established by U.S. forces across the country in 2007 to quell the bloodshed on both sides, to the Iraqi government. Iraqi officials say group members will be hired by the Iraqi ministries and security forces.

But there are not enough slots in the Iraqi security forces to accommodate them all, and Iraqi politicians have expressed ambivalence about the status of the members, who numbered about 100,000, making their future status uncertain.

"Counterinsurgency is always about the population," Buckingham said. "There is usually a small portion that is permanently hostile. There might be a small portion that&#8217;s extremely friendly, then there&#8217;s the large middle group that you&#8217;re fighting for. The Iraqi government is now winning over most of them."

The civil projects and Iraqi army presence were not in this area before, and the locals relied on Mashhadani for many of their needs, said Capt. Nicholas Bajema, Troop A executive officer.

While the U.S. military has trumpeted Iraqi forces taking the lead since the U.S.-Iraq security agreement went into effect Jan. 1, Iraqi troops were largely absent or showed up late to some missions last week.

While that confounded some of the Americans, U.S. forces need to realize that the Iraqis are going to do it their own way, said Capt. Frank Rodriguez, Troop A commander.