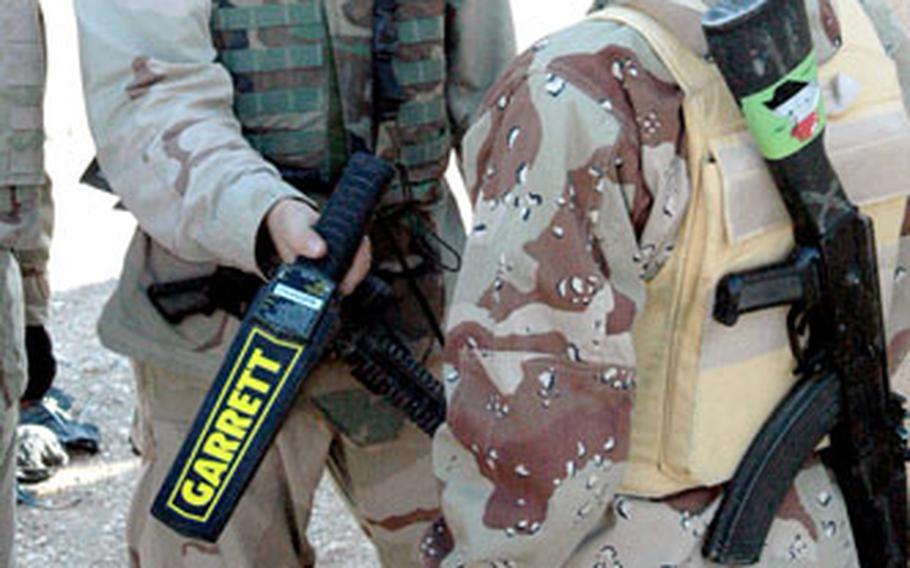 Sgt. Brian Griggs, of Fox Troop, Sabre Squadron, 3rd Armored Cavalry Regiment hands a metal detector to an Iraqi army soldier on Tuesday after demonstrating how to use it at the Rawabi School polling site in Tal Afar. (Monte Morin / S&S)

&#8220;I feel very good,&#8221; said Iraqi army Sgt. Maj. Caesar Nazar, 26. Like the rest of his fellow soldiers stationed at a school used as a polling site in Tal Afar, the tip of one of Nazar&#8217;s index fingers had been painted brown to show he had already voted.

In the last year, Nazar said his company had lost 11 soldiers, but he said he was very optimistic about the future of Iraq and the city.

Prior to September, incidents of insurgent attacks on U.S. and Iraqi military were heavy and routine. After the 3rd Armored Cavalry Regiment and the 3rd Iraqi Army Division staged an offensive there, attacks have fallen off tremendously.

Although this ancient city in northwestern Iraq has thus far avoided any serious violence in the run-up to the election, at least one Iraqi police officer was injured when he was shot at a city polling site. Also, U.S. and Iraqi forces were alerted to the theft of nearly 30 polling site access badges Sunday night in Mosul.

At roughly a dozen polling sites scattered throughout the city, U.S. soldiers from the 2nd or &#8220;Sabre&#8221; Squadron of the 3rd Armored Cavalry Regiment met with their Iraqi counterparts to help prepare defenses and procedures at the polling sites. In at least one case, the regiment&#8217;s commander, Col. H.R. McMaster, personally inspected the polling site.

Andrade&#8217;s company, like others in the regiment, have been working closely with Iraqi army units. He said the Iraqis have made incredible strides.

The raid, in which more than 70 suspected insurgents were taken into custody, is one of a series the Americans and Iraqis have undertaken in an effort to keep Tal Afar from falling back into the hands of insurgents.

While Andrade&#8217;s 3rd Platoon had helped clean and paint the Rawabi School site two months ago, the soldiers found it strewn with trash on Tuesday. They quickly rounded up a group of local youths outside and paid them to clean the grounds.

The youths were slow to begin the work, but Sgt. Brian Griggs, 38, of Phoenix, soon got them working with his own Tom Sawyer strategy.