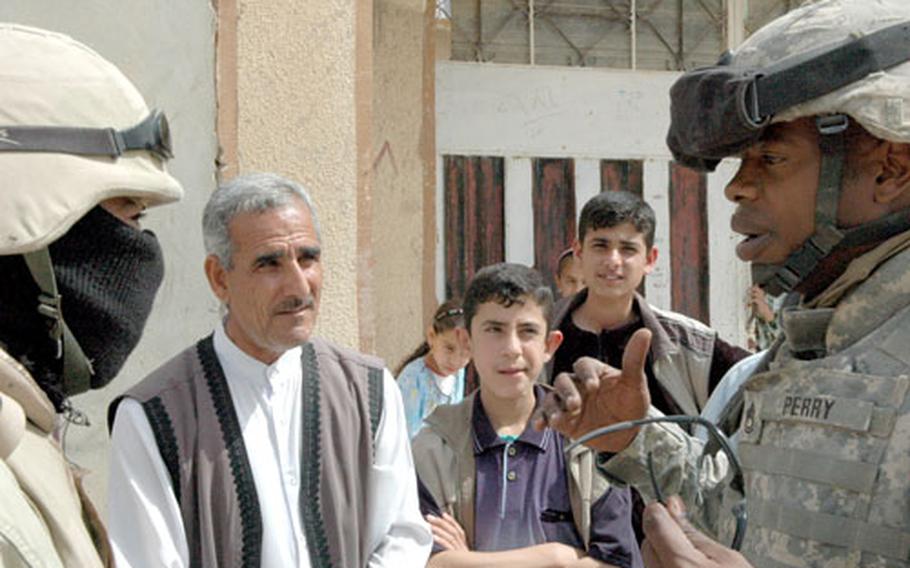 Sgt. 1st Class Melvin Perry, 33, of Atlanta, uses an interpreter to talk to residents in the Qadasiya neighborhood of Tal Afar, Iraq, one day prior to a roundup of military-age men there on Saturday. The neighborhood has been a refuge for insurgents, according to commanders. (Monte Morin / S&S)

Sgt. 1st Class Melvin Perry, 33, of Atlanta, uses an interpreter to talk to residents in the Qadasiya neighborhood of Tal Afar, Iraq, one day prior to a roundup of military-age men there on Saturday. The neighborhood has been a refuge for insurgents, according to commanders. (Monte Morin / S&S) 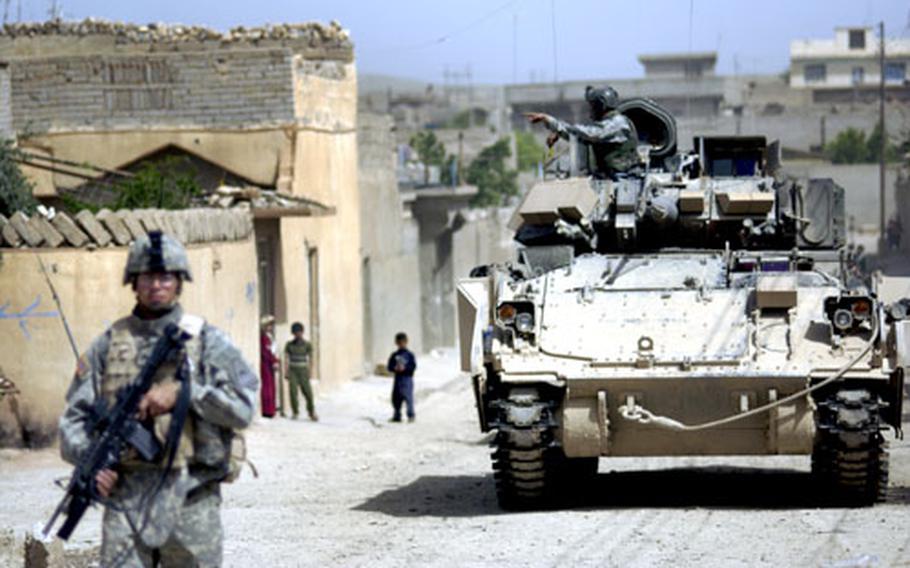 TAL AFAR, Iraq &#8212; It was the single largest military operation waged in this ancient city since armored cavalry units recaptured it from insurgents almost seven months ago, and it was completed without a single shot fired.

In a vivid example of the curious nature of counter-insurgency warfare in Iraq, U.S. and Iraqi soldiers captured 100 suspected insurgents during a daylong roundup of fighting-age men in one of the city&#8217;s most notorious neighborhoods Saturday. At least one of the detainees is the suspected ringleader of a bloody campaign of roadside bombings and ambushes waged here over the past several weeks.

The operation, dubbed &#8220;Duke Storm,&#8221; involved roughly a battalion each of U.S. and Iraqi army soldiers, who rolled out at dawn and encircled an entire neighborhood in the Qadasiya district and detained every male resident ages 18 to 65. In all, just under 1,200 Iraqi men &#8212; roughly 5 percent of the city&#8217;s population &#8212; were held for questioning and paraded before captive insurgents who are now cooperating with the U.S. military to help finger terrorists.

The roundup followed several weeks of heightened attacks, which included at least two car bombings and the death of one U.S. soldier who was killed by a roadside bomb.

While no shots were fired during the operation, it brought an abrupt halt to the attacks.

&#8220;If nothing else this disrupted the enemy,&#8221; MacFarland said. &#8220;The enemy felt this was a safe place for them to hang their heads &#8230; in Northern Ireland they used to say that there were very few people in the IRA, but almost all the Catholics left their back door open for someone to hide in if they were being chased by the Tommies. I&#8217;m trying to get the people of Tal Afar to lock their back doors.&#8221;

The operation began at dawn, as soldiers from the 2nd or &#8220;Dukes&#8221; Battalion of the 37th Armored Regiment and the 2nd Brigade of the 3rd Iraqi Army, as well as local Iraqi police officers, cordoned off the neighborhood with tanks, armored vehicles and razor wire.

As soldiers moved in to detain men from each household, street by street, a Humvee with a loudspeaker rolled through the dusty avenues and blared a &#8220;non-interference&#8221; message in Arabic. The message said that all men were being taken into custody in an effort to root out terrorists in the neighborhood.

At least one detainee was discovered hiding beneath a trapdoor in a home. A woman, who feigned illness, lay on a mattress over the door, officers said. Soldiers also discovered two partially assembled roadside bombs.

Among those who were held was a local sheikh, and the number two man in a network of local insurgent cells.

During their detainment at the school, the Iraqi men who were eventually released were given water and food and whiled away the hours sitting cross-legged and smoking cigarettes as Iraqi soldiers stood watch. For men who had been rousted out of their homes on their day off, they were a study in patience.

&#8220;Can you imagine what it would be like if you had over a thousand Americans sitting out here?&#8221; said Dukes Battalion Commander Lt. Col. John K. Tien. &#8220;We told them &#8212; the reason we did this is for your security. We know the terrorists are using you as a shield and trying to intimidate you. The object today is to show the terrorists that they can&#8217;t do this.&#8221;

Older men were held in schoolrooms, out of the direct sunlight.

The men were released one by one, after they were observed by a cooperating insurgent who was hidden from view. A U.S. soldier who oversaw the procession of men as they were led from the schoolyard joked with each one of them as they passed him in line. Even though few appeared to understand what exactly he was saying, most cracked a smile.

Tal Afar has fallen under heavy scrutiny ever since the 3rd Armored Cavalry Regiment recaptured it during a pitched battle in September. &#8220;Operation Restoring Rights&#8221; ended what commanders described as a savage campaign of intimidation, beheadings and assassinations by Baath Party loyalists and Muslim extremists.

Since that time, Tal Afar has evolved into a powerful symbol of the &#8220;Clear, Hold and Build&#8221; strategy of stabilizing Iraq. In fact, commanders suspect that insurgents stepped up their operations in Tal Afar after President Bush publicly hailed it as a model city in recent remarks.

The 1st Brigade of the 1st Armored Division assumed control of the area roughly three months ago. Since then, they have conducted foot patrols in all sections of the city &#8212; a practice that commanders say is more likely to foster cooperation from residents than vehicle patrols. In some neighborhoods, the patrols operate around the clock, with soldiers conducting random searches of vacant and occupied homes.