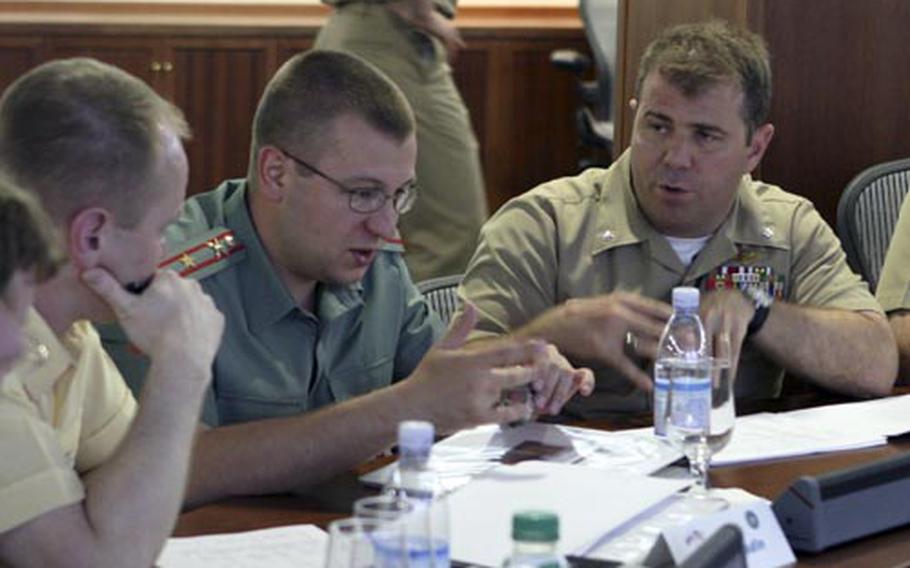 NAPLES, Italy &#8212; The U.S. Navy extended an open invitation this week to the Russian Federation Navy to join forces for missions on the world&#8217;s high seas.

Both marine forces have increased their presence around the globe. The U.S. Navy asked the Russians to join the Navy&#8217;s new maritime initiative, a plan much different from the sea-combat strategies of yesteryear &#8212; those of fighting in deep blue water to sink other navies or deliver missiles inland from the oceans. Now, focus is placed on maintaining safe seas, delivering humanitarian aid, disaster response and countering terrorism.

"The point that we brought out in discussions this week was that we highlighted our new maritime strategy and within that, specifically, the concept of global maritime partnerships," said Rear Adm. Tony Kurta, commander of Navy Europe-Africa plans and policy in Naples.

"We welcome seeing the Russian navy on the high seas anywhere, and look to any opportunity to increase cooperation between our two navies, particularly in global maritime partnerships," he said in an interview.

"We are involved in coordinated actions and we were able to reach mutual understanding of each other&#8217;s points of view," Dmitriev said of the two-day staff talks.

In the late 1960s, there were several incidents between forces of the U.S. Navy and the Soviet navy, including planes of the two nations passing near one another, ships bumping one another, and both ships and aircraft making threatening movements against those of the other side, according to a State Department rundown of the history leading to the agreement. In March 1968, the United States proposed talks to prevent such incidents from becoming serious. The Soviets accepted, and after a few years of talks, leaders signed the agreement.

The pact is reviewed every year, and topping the agendas are discussions of incidents that happen at sea between Russian and U.S. vessels. For example, in February, a Russian Tu-95 bomber flew about 2,000 feet over the USS Nimitz as it sailed the western Pacific Ocean as another Russian bomber circled the ship. Fighters from the Nimitz scrambled to intercept the bombers, though Navy leaders said the carrier did not prepare for battle.

Kurta and Dmitriev downplayed the occurrence.

"[I]t cannot be considered an &#8216;incident&#8217; under the agreement," Dmitriev said through a translator. "These occurrences serve as a foundation for further work on establishing the procedure of how to interact during activity, and I can also add that a working group meeting has been planned the next year to talk about these issues and to elaborate on the appropriate procedure."

"We certainly did, this year, discuss several incidents worldwide where our forces met on the high seas or in the air and we had very frank, open discussions," Kurta added. "Each side talked about the event from their point of view &#8212; then we send technical details back to the experts and we keep working them throughout the year."