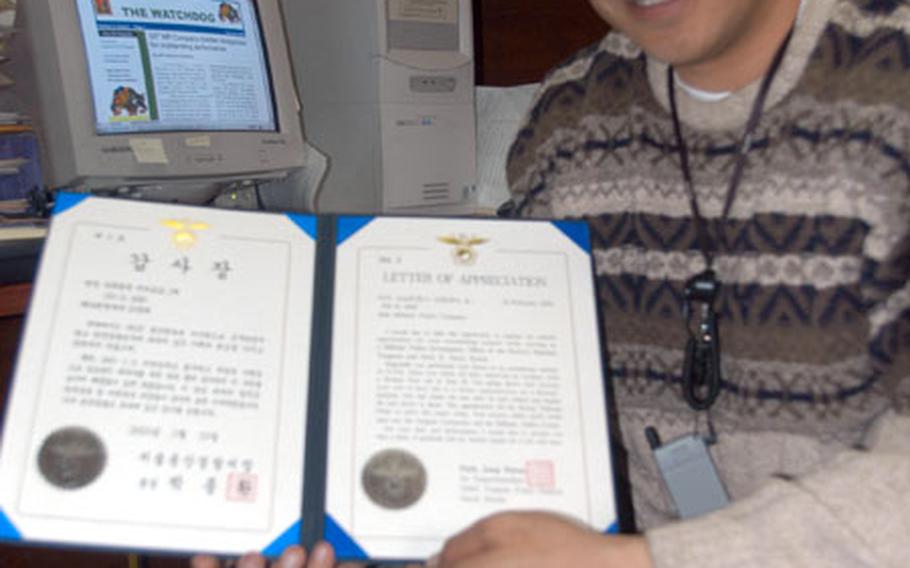 YONGSAN GARRISON, South Korea &#8212; Eagle eyes and fast action netted investigator Samuelu Iakopo Jr. a big catch after breakfast on a recent morning &#8212; a suspect in the death of a taxi driver.

After eating at the Dragon Hill Lodge around 10 a.m. Feb. 8, Iakopo, a 33-year-old investigator with the 55th Military Police Company, came on main post &#8212; and spotted an oddity.

Off-duty and riding in a base taxi, he noticed the driver of an off-base taxi clip another car. The taxi drifted, Iakopo said.

The man, Kim Tae-won, wearing a three-piece suit, ran off. Iakopo asked his taxi driver to stop, then ran after him.

He chased Kim behind buildings near Gate 10. Iakopo grabbed him; the man tried to squirm out of his jacket. The two crashed to the ground.

The chase ended with Iakopo atop the man, who squirmed and spoke Korean. The investigator said he used his cell phone to call military police.

But South Korean police already were part of the chase, Iakopo said. Kim and his friend, Yoon Hae-sun, 17, face charges in the robbery and death of the driver of their cab, 58-year-old Chong Young-ung of Seoul.

Yongsan Police said Kim and Yoon planned to assault a taxi driver. They entered Chong&#8217;s cab on Feb. 7, and he drove them outside of Seoul in Kyonggi Province, where Kim attempted to strangle Chong, police said.

They then put Chong in the taxi&#8217;s trunk, and Kim later beat Chong with a stick until he died, police said.

The next day, police said, a motel owner near Yongsan Garrison alerted them of a car in his parking lot. Kim got in the car, and police chased him until he drove onto base.

For his efforts, the U.S. Army gave Iakopo an Army achievement medal. Senior Superintendent Park Jong-hwan of the Yonsan Police Station presented an award certificate to Iakopo on Feb. 19.