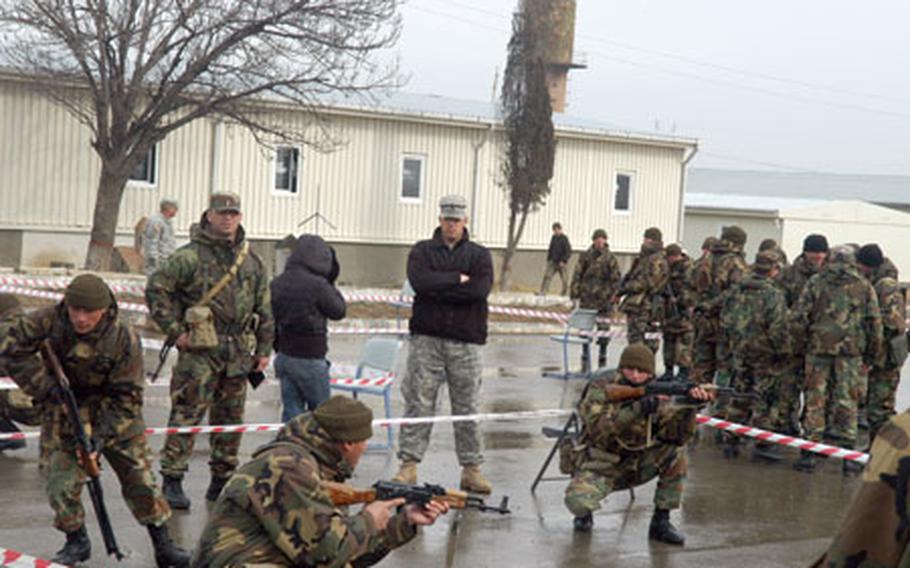 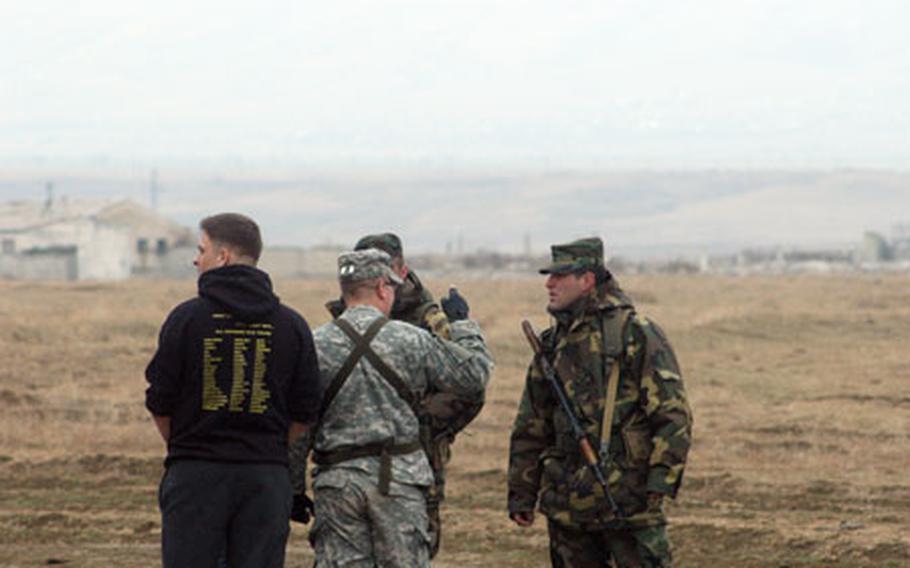 U.S. Army 1st Lt. Joshua Sims, center, dresses down a junior Georgian officer for not leading his soldiers during a roadside bomb exercise at Krtsanisi Training Area in the small post-Soviet state of Georgia. U.S. military personnel have been frustrated during nearly a year of training at times over the lack of officer leadership in combat situations. (Geoff Ziezulewicz / S&S)

American soldiers let off a loud yet harmless blast, and the Georgian soldiers jumped out of three trucks and went into response mode. Aside from the shouts of &#8220;bang-bang&#8221; substituting for blank rifle rounds, the scene resembled what these soldiers may face during an upcoming deployment to Iraq.

Soon, Army 1st Lt. Joshua Sims had seen enough. He emerged from his trench where he had detonated the fake bomb and stormed over to the head junior officer on the Georgian side.

&#8220;Where the [expletive] is your Kevlar?&#8221; Sims asked his Georgian equivalent, who had stood in the rear during the exercise.

&#8220;Once the guys dismounted the convoy, they did exactly what they were supposed to do,&#8221; Sims said after he finished dressing down the Georgian officer. &#8220;But the guy doing all the yelling and pushing and shoving was the first sergeant. The guy walking around with his hands in his pockets was the lieutenant.&#8221;

American forces in this former Soviet state of about 5 million in the Caucasus have seen a lot of incidences like the one that recently set Sims off.

As about 65 soldiers, sailors and airmen finish up nearly a year on the ground training a Georgian army brigade to NATO standards as part of the Georgia Sustainment and Stability Operations Program II, shaking local leadership out of its Soviet mentality has been a significant hurdle to military modernity.

Officers in the Georgian army are accustomed to commanding from a perch. They often don&#8217;t lead their squads or platoons in combat, but occupy a distant command position that is elevated from their soldiers, U.S. soldiers say.

Noncommissioned officers are used to getting orders strictly from the top down and don&#8217;t take the initiative to make decisions when they are needed in combat.

A solid NCO corps, something at the heart of the U.S. Army and other Western militaries, is still novel to the Georgian forces.

So along with working on marksmanship, mortars and other infantry training, U.S. soldiers are trying to change the mind-set of a military whose government wishes for a closer relationship with the Western world.

Sims worked to contain his exasperation after talking to the Georgian officer.

Different schools of thoughtWhile Georgia has been independent since the 1990s, a government with a pro-West and pro-NATO stance has only emerged in the past few years. The Georgian military is modernizing, but much still must be done.

Making NCOs more proactive, and officers more engaged, is a matter of moving the army and its leaders to a different mind-set altogether, said Army Lt. Col. Craig Jones, the training program&#8217;s commander.

NATO standards allow for more adaptation to the situation in front of soldiers and commanders, he said.

&#8220;Everyone maneuvered on a line, because it made it very easy for the commander to control,&#8221; Jones said of the old Soviet strategies. &#8220;We maneuver staggered and depending on how the terrain supports us. And we can use that to our advantage because our junior leaders actually lead.&#8221;

Change will come though, Jones said, noting that within the past year, Western-educated officials have been appointed to the majority of leadership positions in the Georgian Ministry of Defense.

It&#8217;s going to be harder to change that Soviet mind-set for some Georgian officers, Howell said.

The Georgian military doesn&#8217;t employ promotion boards, and oftentimes moving up the ranks involves connections and who a soldier knows as opposed to ability, Howell said.

Jones said the Georgians have been receptive to this different line of military strategy.

How soon these lessons will stick is unclear, Howell said.

U.S. personnel responsible for the training &#8212; set to end next month &#8212; have just 12 weeks to teach each battalion, and some said they hope their lessons and influence will linger after they&#8217;re gone. But there are no guarantees.