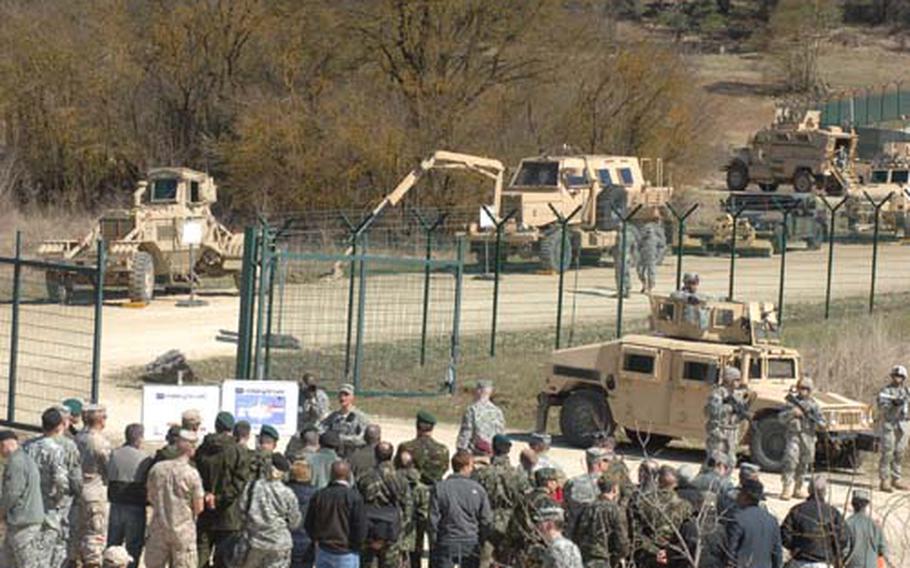 HOHENFELS, Germany &#8212; U.S. troops and personnel from 16 other nations swapped expertise this week on countering improvised explosive devices, the biggest killer of U.S. and coalition forces in Afghanistan.

Gary Carlberg, deputy chief of operations and training at the U.S. military&#8217;s Joint IED Defeat Organization, said the conference in Hohenfels is a response to Defense Secretary Robert Gates&#8217; call in February for more counter-IED equipment and training for International Security Assistance Force partners in Afghanistan.

&#8220;I think [boosting training for ISAF partners] is a game changer for Afghanistan,&#8221; Carlberg said Tuesday.

Carlberg said that U.S. forces are experts at the counter-IED fight by virtue of their experience in Iraq.

And, since the U.S. has newer equipment such as Mine-Resistant Ambush-Protected vehicles, insurgents are targeting coalition forces more often.

&#8220;Some of the counter-IED experts and key trainers from those nations can say: &#8216;These would be some great tools or processes that we could use to improve counter-IED training.&#8221;

Most of the nations attending the Multinational Counter-IED Conference this week provide Observer, Mentor and Liaison Teams that train Afghan forces, Carlberg said.

One of the soldiers participating at the conference, French Army Maj. Lionel Pechera, 34, said his military&#8217;s counter-IED efforts mirror the U.S. approach.

Lt. Col. David Ray, 40, of Olathe, Colo., a combat engineer and counter-IED trainer at the Hohenfels IED academy, said about 4,500 foreign troops have done counter-IED training at the academy in the last few years.

&#8220;We want to make sure all personnel who operate in support of ISAF arrive ready to operate at the same level. We expect them (partner nations) to generate their own counter-IED capabilities as a result of working with us,&#8221; he said.