U.S. hopes Afghans will grasp ‘a piece of freedom’ 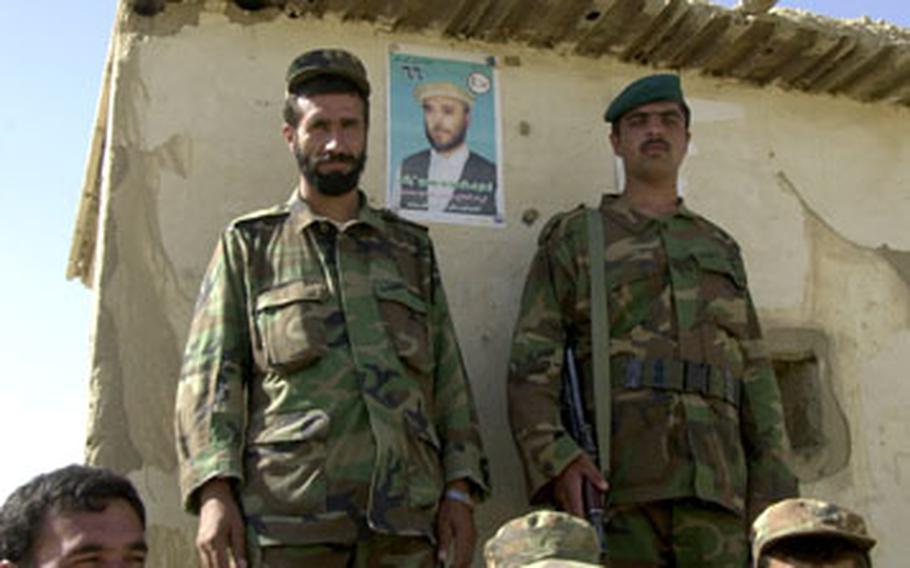 Afghan National Army troops stand next to a campaign poster outside their post in the town of Sayat on Saturday afternoon. The troops will perform security during Sunday’s election. (Steve Mraz / S&S)

BAGRAM AIR FIELD, Afghanistan &#8212; In a land said to cherish customs but abhor rules, millions of Afghans are set to further establish a democratic government Sunday by voting in their parliamentary and provincial council elections.

And following the election, a &#8220;blitz&#8221; of one- to two-month civil-military projects will be conducted across the country to show Afghans the benefits of their government and to erode faith in the insurgency.

Sunday&#8217;s vote should be as secure as possible, thanks in part to a relentless U.S. military offensive aimed at eradicating insurgents.

Champion noted that insurgent activity in recent weeks was less than what occurred during last year&#8217;s Afghan presidential election. U.S. and coalition forces are not anticipating a coordinated enemy attack during the election, Champion said in the release.

For Sunday&#8217;s election, coalition forces will provide a third ring of security around polling locations while the Afghan police and army take up the first and second rings of security, respectively.

&#8220;After the election, we will maintain that focus, but also you will see a blitz of civil-military operations around our area of responsibility to show the benefits of the election and to convince more and more Afghans that there are alternatives to the enemy&#8217;s way of life.&#8221;

Sunday&#8217;s vote marks the next step toward democracy for a nation that has experienced armed conflict and hostile rule for a majority of the past 25 years.

Roughly 5,800 Afghan candidates are vying for a spot in either the 249-seat parliament or one of 34 provincial councils.

Sgt. Mohammad Dawood of the Afghan National Army will perform election security around a polling location at Shabaz Khill School near Sayat on Sunday.

&#8220;We will be driving around town, checking out everywhere,&#8221; Dawood said through a translator.

In October, Afghans participated in a presidential election that saw Hamid Karzai voted in as the nation&#8217;s first democratically elected leader.

The parliamentary and provincial council elections to take place Sunday were originally scheduled for May. Security concerns and &#8220;technical matters&#8221; caused the election to be postponed. Initially, the parliamentary vote and presidential election were scheduled to occur in June 2004.

The elections are the final step of the Bonn agreement. The agreement, a plan to establish Afghan government, was drafted by Afghan groups at a United Nations-organized gathering after the Taliban were removed from power in late 2001.

One troop stationed at Bagram Air Field saw firsthand the impact the upcoming election is having on Afghans. Army Reserve Sgt. Jason Arnold of the 490th Civil Affairs Battalion of Abilene, Texas, said an Afghan told him he was excited and happy about the election.