Children clown around while playing in the park adjacent to Abu Nuwas Street in eastern Baghdad. The children said they didn’t like to come to the area to play until it was recently cleaned up by the U.S. (Les Neuhaus / S&S)

Children clown around while playing in the park adjacent to Abu Nuwas Street in eastern Baghdad. The children said they didn’t like to come to the area to play until it was recently cleaned up by the U.S. (Les Neuhaus / S&S) 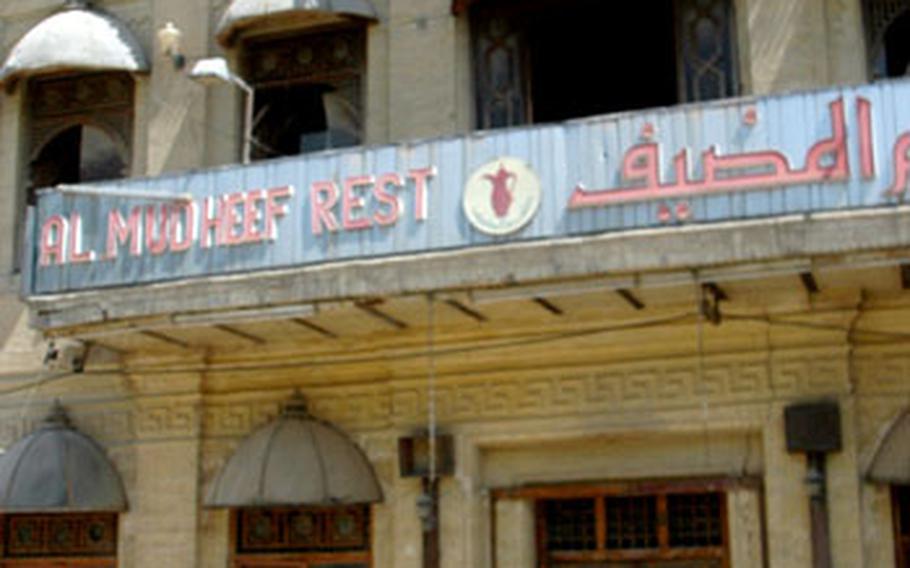 The Al-Mudheef restaurant, once at the center of Abu Nuwas Street’s thriving action, stands in disrepair. (Les Neuhaus / S&S) 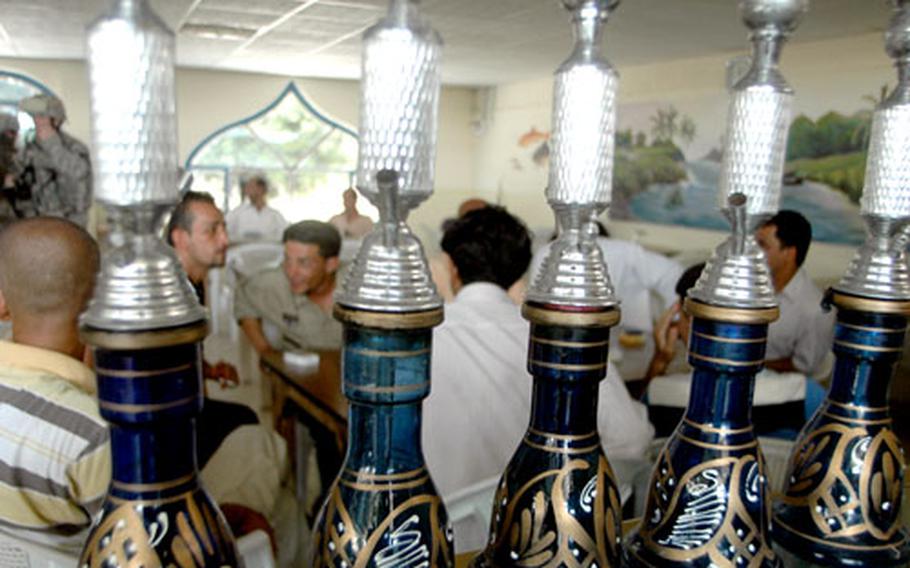 Men congregate and smoke tobacco from hookahs in The Boat, a restaurant on the banks of the Tigris River in Baghdad. (Les Neuhaus / S&S) U.S. and Iraqi military officials pause Tuesday at The Boat and watch as fish flop around on the floor. The owner said he was grateful to the $2,500 the U.S military gave him for renovations. (Les Neuhaus / S&S)

BAGHDAD &#8212; Use your imagination and think of Miami Beach&#8217;s drag of hotels and clubs at night. Or even Venice Beach, with its winding sidewalk that hugs the coastline for skateboarders or romantic couples to stroll during a sunny afternoon.

Now imagine there&#8217;s no ocean but rather a legendary river, the Tigris, to gaze out over, with a thriving scene of nightclubs and streetside bars and cafes to negotiate on a fun-filled outing with friends fresh in town from Beirut, Lebanon or London.

You&#8217;ve just been transported back in time to mid-1970s Baghdad and, more specifically, a legendary street named after a famous eighth-century poet whose parents were Arab and Persian, reflecting the cosmopolitan nature of the avenue, dubbed Abu Nuwas.

The area fell into disrepair by the late 1990s and became something akin to a skid row by the time of the U.S. invasion in 2003 &#8212; a gathering place for men passing out from overindulgences in alcohol, relieving themselves where they pleased and where refuse piled up.

Five months ago, the U.S. military stepped in, tipping the renovation pot over $2 million of the money spent by the U.S. State and Defense departments to clean up the area over the last few months.

They&#8217;ve also handed out tens of thousands of dollars in micro grants in an effort to return the street to its heyday, thus giving Iraqis a place to relax from the war. Where the vagrants once passed out, and sometimes died, Iraqi-area residents said, children now play soccer and romp around on playgrounds where green grass grows, a rarity in the capital.

Abu Nuwas stretches for nearly two miles along the Tigris River&#8217;s east bank, across from the International Zone, and was once the hippest place in Baghdad. Upscale Western and Arab hotels lined its boulevard and a historic fish market drew crowds to teeming restaurants where people ate and smoked tobacco from colorful 4-foot-high hookahs.

A Jewish temple still stands as evidence of the street&#8217;s diverse nature, but its roof is crumbling. No Jews have come to worship in a long time.

&#8220;It is known as one of the most famous streets in Baghdad, with historic homes and where famous people once came and went,&#8221; the neighborhood&#8217;s organizational chairman, Qays Foraj Ali, 39, said through an interpreter. &#8220;We asked for help for years from the Iraqi government, but no help came until the Americans responded to our requests.&#8221;

Hence, the hookah smokers have returned.

Judge and his counterpart, Maj. Sharon Falke, a civil affairs liaison from Tucson, Ariz., said that once the street is fully opened to the public, undercover Iraqi police will patrol it. They also said a small Iraqi army outpost, already built, will house troops to support the police and ensure safety for those who enjoy the thoroughfare.

Falke said another $1 million was still expected to be poured into the area&#8217;s revival. Dozens of $2,500 micro grants have been distributed to area business owners to stimulate the boulevard&#8217;s economy, totalling more than $80,000 so far.

Some area residents argued that if Abu Nuwas Street was to be a showcase where Baghdad residents could relax with their families, the U.S. would need to kick in more cash.

&#8220;What good is a newly painted and clean store if there is nothing to put on the shelves to sell?&#8221; asked Iz al-Deen Yousif, whose printing shop is adjacent to the dilapidated Jewish temple.

But he and the others expressed their gratitude, especially Ali, who headed the renovation requests for more than three years.

&#8220;This gives the U.S. military and government a chance to leave their fingerprint on something worthwhile,&#8221; Ali said.