U.S. helping get Nigeria’s C-130s back off the ground 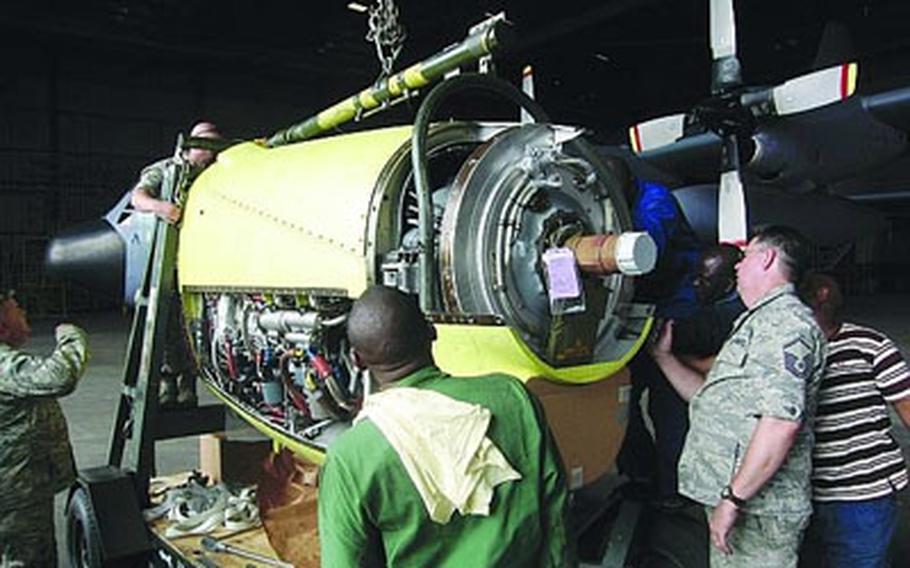 Master Sgt. Jim Goostree examines the engine from a Nigerian C-130 as part of an effort to restore the aircraft to flying condition. Once able to fly, the plane will go to a repair depot in Europe for a more extensive overhaul. The 17th Air Force (U.S. Air Forces Africa) and the West African nation are involved in several military-to-military projects. Goostree is a member of the Tennessee Air National Guard&#39;s 118th Airlift Wing. (David MacKenzie/Courtesy of the U.S. Air Force)

As the United States looks to build strategic partnerships with African countries, it&#8217;s investing a lot of hope in Nigeria.

Some of that expectation can be heard in the drone of a C-130 jet engine.

The U.S. Air Force recently helped restore one of Nigeria&#8217;s defunct C-130s to flying condition, which enabled the plane to be flown to a Lockheed Martin depot in Lisbon, Portugal, for a major, months-long overhaul.

It&#8217;s optimistically viewed as the first step in getting half of the Western African nation&#8217;s fleet of C-130s back in the sky, a feat that would enable Nigeria to haul peacekeepers or aid in regional humanitarian missions, Air Force planners say.

Nigeria is footing the $9 million bill for the maiden revamp.

This is the first time the U.S. Air Force in Africa has &#8220;partnered with a host nation using their money&#8221; to take an aircraft to a depot and revitalize it, said Lt. Col. Miklos Kiss, Africa branch chief for deputy undersecretary of the Air Force, international affairs.

And the entire project was pushed through in less than a year, from procuring funding to getting the plane to the depot, said Lt. Col. Dave MacKenzie, deputy director of 17th Air Force&#8217;s plans and programs directorate.

The idea to help Nigeria revive its transport birds took wing on a Lagos tarmac more than a year ago.

Lt. Col. David Pond, an Air Force reservist, was working in the country when he noticed Nigeria&#8217;s C-130s in obvious disrepair sitting idly at Ikeja Air Base. Nigeria bought the C-130 H-models from Lockheed Martin in the 1980s. Of eight aircraft, only one was in service.

A U.S. congressional delegation visiting the country a year ago also noticed the birds and came home with questions for the Air Force: Why weren&#8217;t the planes flying, and was there anything that could be done to get them back in the air?

With his background as an aircraft maintainer, Kiss knew some of the planes could be fixed.

With Pond&#8217;s connections in Nigeria, he knew the right people to engage.

Working with U.S. Air Force officials based in Nigeria, Pond, Kiss and MacKenzie met last year with the Nigerian chief of air staff in Abuja. Other meetings with top defense officials followed and soon an agreement was reached.

Nigeria&#8217;s goal was to be able to move African Union peacekeepers into places such as Somalia or Darfur, if the need arises, and to not have to rely on outside forces to do so, MacKenzie said.

In August, the 17th Air Force, the air component of U.S. Africa Command based at Ramstein Air Base, Germany, stepped in. It brought about a dozen aircraft maintainers from the Tennessee Air National Guard to Nigeria for two weeks to show Nigeria air force mechanics how to repair the depot-destined C-130.

The plane was flown to Lisbon this fall.

Whether Nigeria will agree to fund depot work for another plane is the $9 million question. Three more aircraft appear to be salvageable for flight, Kiss said.

Future challenges include helping Nigeria build its military base infrastructure, improve its spare parts supply chain and training maintainers so they can sustain the C-130s, Kiss said.